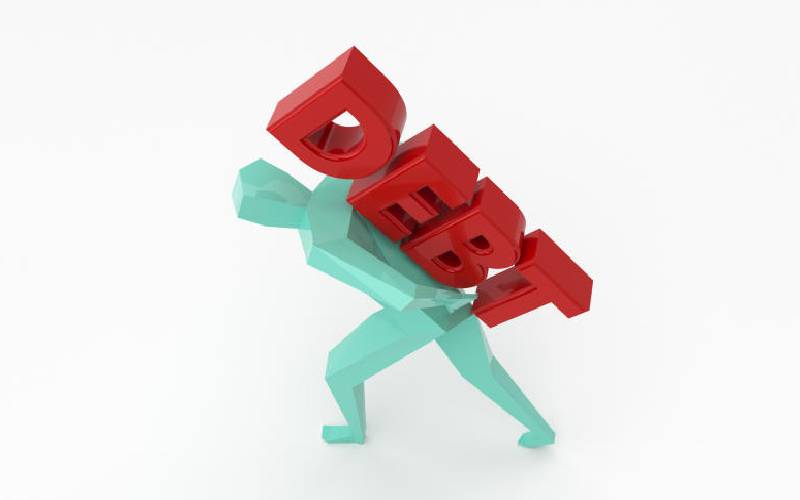 It is a moment of reckoning for the Jubilee administration that has recently been knocking on the doors of various creditors, seeking debt relief and cancellations.

In January, the country received a debt repayment holiday of Sh78 billion from some bilateral partners, signalling a liquidity crisis as the government grapples with Sh7.3 trillion in debt.

By the time the current administration leaves office next year, however, it will hand over a debt burden of Sh10 trillion to the next government.

This will move beyond the Sh9 trillion legal ceiling.

Yet, in the last eight years, the government has shown rapacious appetite for expensive loans, which it has sunk into low-yielding mega infrastructural projects, insisting they will pay off in future as citizens enjoy improved standards of living.

The debt situation has been compounded by the coronavirus pandemic that for nearly a year has violently shaken the pillars of the economy, exposing its fragile fiscal position – high debt vulnerabilities, bloated spending and dwindling tax revenues.

When Ukur Yatani took over as Treasury Cabinet Secretary, he vowed to stay away from expensive loans.

He also implored ministries to tighten their belts and pushed the Kenya Revenue Authority (KRA) to collect every penny owed to the State. All this was aimed at keeping the country’s debt sustainable.

But the pandemic – which has shattered other world economies, not just Kenya’s – scuttled Yatani’s austerity plan, dragging the country back into borrowing frenzy as the government sought to prop up an economy that was ailing due to the adverse effects of the deadly virus.

A Sh261 billion credit facility from the International Monetary Fund (IMF) is the latest loan Kenya has received since the country recorded its first case of coronavirus last March.

The loan will be given under a programme that is ironically supposed to help the country reduce its debt vulnerability and gain the confidence of other development partners.

However, the three-year programme might also end badly for Kenyans, with the IMF expecting the government to restructure its fledgling State corporations in what is reminiscent of the 1990s-style structural adjustment programme that left thousands of civil servants without jobs.

With the pandemic threatening to stifle the country’s overstretched health system, cripple the economy and depress revenues, the Government has begun to slowly come to terms with its past fiscal misdeeds.

In a recent interview with Spice FM, a radio station owned by the Standard Group, Yatani admitted that some loans were taken for projects that are “more or less considered dormant”.

The Treasury has since marked a few of these loans as candidates for cancellation.

“In a situation where absorption is low, then it does not make a lot of sense to continue paying interest or commitment fees when its intended objective of realising development is not realised,” said Yatani.

Indeed, the World Bank’s advice to the government, in one of its reports on the Kenyan economy, is to review the 1,600 ongoing projects.

The global lender said some of these projects “have been drawing funds from the exchequer for over 10 years and yet remain less than 50 per cent complete”.

Some experts reckon the runaway spending that started in 2013 has little to do with economics, but more with politics.

President Uhuru Kenyatta and his deputy William Ruto took over the reins of power with International Criminal Court (ICC) charges hanging over their heads.

As a result, the new government made the fight against the ICC its primary objective in the initial stages, according to John Githongo, an activist and former anti-corruption czar.

“They lost control over corruption at that time. It was a free-for-all,” said Githongo, noting bad spending habits took root.

Suddenly, tenderpreneurs – a new breed of opportunistic brokers who cashed in on government contracts – thrived. Costs of projects were inflated to offset kickbacks, explains Githongo.

For example, in 2015, the Devolution ministry is alleged to have paid Sh450,000 for 18 condom dispensers compared to the market price of Sh4,500 apiece at the time.

The ministry also acquired 20 ballpoint pens at Sh174,000, which translated to Sh8,700 apiece compared to the market price of Sh300.

And in 2015, the government proposed to spend Sh37,500 per bar of soap to be distributed to Kenyans who would be affected by the El Niño rains. This was against a market price of about Sh150 apiece in local shops and supermarkets.

Corruption seems to have been devolved to the 47 counties.

Optimists saw counties as the gem of the 2010 Constitution, which would enable, for the first time, funds to cascade to some far-flung regions that had hitherto been marginalised.

But cynics saw counties as the new spending hotspots that absorbed billions in shareable revenue, with very little of it going to development projects.

In 2015, for example, the Bungoma County Government procured several wheelbarrows at Sh109,320 each.

No wonder, when the former Auditor General Edward Ouko released his first audit report for both the national and county governments, he immediately became a marked man.

Ouko’s audit of the national government spending in the 2013-14 financial year showed that about a quarter of the country’s Sh1.6 trillion budget could not be adequately accounted for.

The then Treasury CS Henry Rotich dismissed Ouko’s report as “unprofessionally done,” noting that their own review had shown that no resources were lost.

According to Githongo, when Uhuru and Ruto were not attending to their ICC cases, they were busy putting on a Public Relations show by launching overly ambitious projects around the country.

“It was about big projects to impress people, not necessarily to create jobs,” said the former anti-graft czar.

Some of the ambitious projects would come to haunt the administration in the form of increased debt service costs.

In an attempt to show his commitment to fighting graft, President Uhuru in 2016 during his State of the Nation address tabled in Parliament a list of shame that saw a few Cabinet Secretaries and senior officials kicked out of government. But the rot has refused to go away.

“Once you let the genie out of the bottle, it is almost impossible to put it back,” explained Githongo.

Uhuru has also instructed all the ministries, departments and agencies to finish all the ongoing projects before starting new ones. Only projects related to his Big Four agenda can leave the ground.

Since taking over power in 2013, the Jubilee administration has binge-borrowed more than Sh5.2 trillion – almost double the loans taken by the previous three governments combined.

However, this has barely uplifted the lives of Kenyans. The sum of all goods and services produced in the economy, technically known as the gross domestic product (GDP), has grown by Sh5 trillion during this period.

Kenya is like a household that is incurring debts more than it is generating income.

Indeed, there has been an even slower pace of growth in tax revenues and export earnings, an irony given that tax collection is largely a function of impressive economic growth.

With enough tax revenues, the Government can repay creditors - a first charge - and comfortably run its affairs.

While debt has grown more than three-and-a-half times from Sh1.9 trillion in June 2013 to Sh6.7 trillion in June last year, tax revenues have barely doubled from Sh740 billion to Sh1.43 trillion over the period.

Gerishon Ikiara, an economist and former Transport Permanent Secretary, said there is a need to separate debt as a subject from its misuse, lest the country throws “out the baby with the bathwater.”

“I do not doubt that for a country to move forward, it requires to borrow,” said  Ikiara.

But he takes issue with the way the borrowed money has been misused.

“But I would not say that you should not borrow because of the way it is abused,” said the former economics lecturer at the University of Nairobi.

Instead, he said, authorities should get whoever is misusing the public funds and apply the “harshest penalty you can”.

Rotich is one of the victims of Uhuru’s fight against the misuse of borrowed cash.

He is currently facing various charges for approving the wiring of cash for two white elephant dams – Arror and Kimwarer dams in Baringo County.

However, Ikiara is concerned at the growth of debt service costs.

Ideally, he explained, Treasury and the macro-economic department of the ministry should be able to project the expected earnings and the performance of the economy to be sure that when the country starts paying a loan, for example in 10 years, the economy is earning enough to be able to pay the increased costs.

But that does not seem to have been done in the past. While it takes some time before a country begins to reap the benefits of an infrastructural project like a road or railway with better cost-benefit analysis tools, analysts reckon Treasury could have matched projects that take longer to give returns with loans that also take longer to mature.

In the case of the Standard Gauge Railway (SGR) – the Sh554.4 billion modern railway line that runs from the port city of Mombasa through Nairobi and terminating into Naivasha, the benefits of the project should have been apparent before the country made its first payment on July 21, 2019.

The line, the Government projected, was expected to boost GDP by 1.5 per cent, allowing the Chinese loans to be comfortably paid back.

Jason Braganza, an economist who also works for African Forum and Network on Debt Development (Afrodad), an NGO that champions debt relief for developing countries, insists the SGR will remain bankrupt for several years.

“Its (SGR’s) complete inability to get cargo off the road is just a typical example of how poorly designed these mega projects are,” said Braganza.

The mistake governments tend to make, added Ikiara, is to come up with political or populist programmes and push them down the throats of professionals.

“You need very clear professional scrutiny to examine the commitment that you are making,” he explained, noting that such a decision should be made purely on economic parameters rather than politics or personal references.

“You should be able to calculate as an economist or a business person so that you can match the economic growth and repayment costs,” said Ikiara.

Failure to carry out an effective cost-benefit analysis has seen debt service costs grow at an alarming speed.

In the financial year ending June 2019, for every Sh100 that the country earned from taxes, Sh57 went into servicing debt.

This is compared to only Sh25 that Treasury paid six years before.

Increased debt service costs have been due to increased stock of expensive commercial loans such as Eurobonds, loans from commercial banks and some from China.

By June 2019, interest payments took up a fifth of the country’s taxes, gobbling up Sh375.7 billion.

This was more than the Sh314 billion the 47 counties received as their equitable share that fiscal year.

Six years ago, interest payments took up 14 per cent of the country’s ordinary revenues.

By last year, as a result of the negative effects of the pandemic, the IMF downgraded the country’s risk of debt distress (default) to “high” as exports declined.