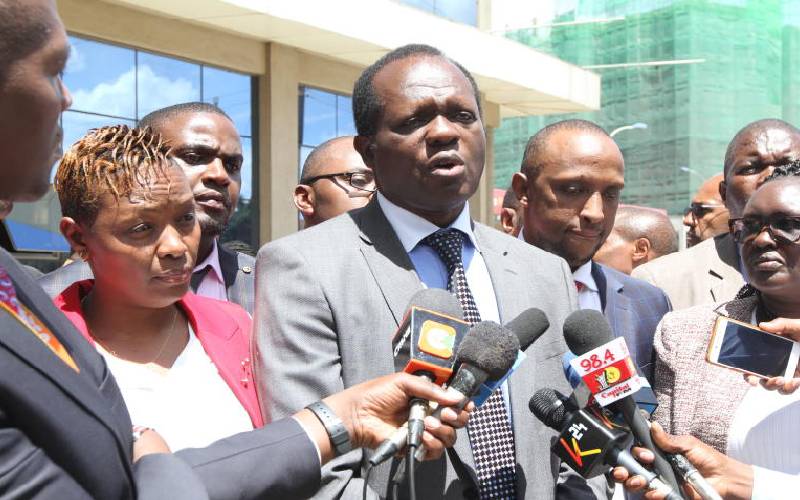 A commercial court in Nairobi has placed Jubilee Party Secretary General Raphael Tuju’s firm, Dari Limited, in receivership over Sh1.5 billion debt. Justice Grace Nzioka yesterday directed receiver managers Thoithi Muniu and George Weru to run the firm, noting that Mr Tuju had not opposed their appointment by the East Africa Development Bank (EADB). She, however, barred the two from disposing of any asset used to secure the disputed Sh1.5 billion loan. According to court documents, Dari borrowed Sh900 million in 2015 to purchase a property known as Tree Lane in Nairobi. The interest on the loan is more than Sh600 million.

Dari lawyers Paul Muite, Paul Nyamodi and Bridget Ndong had complained that EADB and the receiver managers had pushed for a freeze and said the property should not be disposed of before the case is determined. “The plaintiff operates a cashless business and has money in the accounts the defendants have frozen. The end of the month has come and it will not meet its obligations to suppliers and over 100 employees. The business should not be held at ransom by receivers,” Dari lawyers argued. Yesterday, the judge, however, found that the issue of payment to suppliers and salaries will be sorted by the receiver managers. She said they should account for operations of the company once they take office. Justice Nzioka said she could not order Dari to be run by its directors and the receiver managers based on the mistrust between the two. The judge observed that a simple task of meeting to iron out who was to run the company in the intervening period had hit a dead end. According to the judge, the bad blood stems from an accusation that Dari directors had frustrated efforts by the receivers to take over the company by withholding financial information. On the other hand, she said, Dari accuses the bank of underhand tactics which resulted to its failure to pay the loan. “The company cannot be effectively run by both the directors and the receivers. Upon appointment, the receivers remain in force. They will not dispose any assets under debenture,” she ruled.

Urgent case Mr Muite urged the court to determine the case urgently, noting that no company in the country has survived after being handed over to receivers. He said Tuju was healing well in the United Kingdom and will be ready to testify before the court by the end of this month. Justice Nzioka’s ruling is a second setback against the politician. Another judge from the same division two weeks ago declared that a judgement obtained by the bank in the UK can be enforced in Kenya. Justice Wilfrida Okwany, in her judgement which paved way for the bank to go after Tuju’s assets, ruled the politician had an opportunity before the UK Court of Appeal, but which he lost.