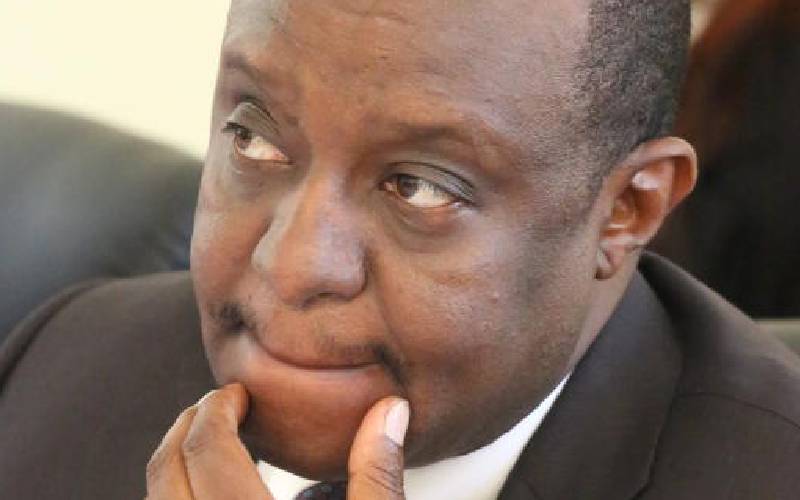 Henry Rotich’s illustrious career peaked with his appointment to Cabinet but has now suffered a major setback after his arrest. Close family members and aides hung pensively around Mazingira House as the Treasury Cabinet Secretary (pictured) they had looked up to recorded a statement in connection with the Arror and Kimwarer dams' scandal. As evening approached, it became clear that he would be spending the night in police custody.

Rotich, a Harvard-educated economist is the seniormost suspect in the scandal that has also roped in at least two principal secretaries and many other Government officials. So who is this man? Rotich was born in 1969 in Kimwarer area of Keiyo South, Elgeyo Marakwet County. He went to Fluorspar Primary School in Keiyo South District and later joined Saint Joseph's High School for his secondary school. He later joined the University of Nairobi to pursue a Bachelor’s Degree in Economics and graduated in 1989 with First Class Honours. In 1993 he graduated with a Master's Degree in Economics from the same university.

SEE ALSO: Kenya to sink into recession for the first time in 20 years

In 2010 he graduated from Harvard University with a Master's Degree in Public Administration. He is a father of two and lives with his family in the affluent Karen neighbourhood in Nairobi. As Treasury CS, he is a director in more than eight firms in Kenya, including Kenya Commercial Bank Limited, Kenya National Bureau of Statistics and Telkom Kenya Limited. Prior to his appointment as CS in 2013, Rotich was the Head of Macroeconomics at the Treasury. His job was to formulate policies that would ensure sustainable public spending aimed at achieving the Government's development priorities.

SEE ALSO: Youth curse: Why the good jobs are going to old people

President Uhuru Kenyatta identified him when he (Uhuru) was Finance Minister in the coalition Government after the botched 2007 elections. In 2004, Rotich served as an economist at the International Monetary Fund local office in Nairobi after a stint at the Central Bank of Kenya. On his first budget, eager to win public trust, Rotich splashed billions of shillings on ambitious projects such as Galana Kulalu irrigation scheme and Standard Gauge Railway. A few months down the road, Rotich would stoke controversy when he decided to borrow internationally through the issuance of the debut Eurobond worth Sh275 billion. How the money was ultimately be spent has never quite been cleared, handing the then fiery opposition lots of ammunition with which to hit the Government. Without a clear plan on projects to benefit, the funds were simply shared between ministries and departments, so the government says.

SEE ALSO: State’s appetite for taxes ups pain at the pump for consumers