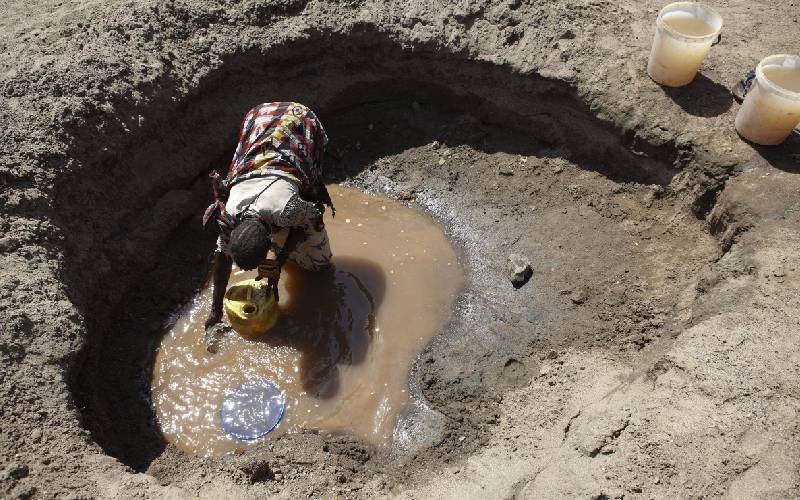 In many parts of Kajiado County, residents see only one way out of poverty: selling their land. They’re not able to coax much out of it after all. But one man is looking to change this mindset, and he’s leading by example. Rev Joseph Oloimooja is an Anglican priest who serves with the Episcopal Church in the USA. He’s gone into commercial farming in the rather dry Maili Tisa area in Namanga, about 25 kilometres from the Kenya-Tanzania border, Kajiado County.

Joseph has set up a model farm named Olaitotioni, a Maasai word for ‘feeder’. His plan is to show his community that while the area may be dry most of the year, it’s not useless. Working in reverse Joseph started out with one acre in 2017, before quickly adding on to his farm. Currently, Olaitotioni covers 200 acres, and it’s drawn visitors from far and wide, most recently a team from Kitale. One of the priest’s strategies is to time his harvests to coincide with when the crops are difficult to find the market. For instance, he’s growing tomatoes with the intention of harvesting them between April and May, and November and February. “I’m working in reverse, targeting months when crops like tomatoes or onions are few in the market to reap maximum benefits,” says Joseph, who’s currently in the Kenya to oversee harvesting.

It’s tomato season for Olaitotioni now, with the crop grown on five acres. Harvesting is done on Mondays and Thursdays, and the produce sent to Nairobi and urban centres within Kajiado County. “One farmer who’s followed my model had no idea how to get into the market, so we advised him on which months to target so as to draw traders to his farm and get the best prices for his harvest.” Joseph says his main aim for setting up the farm was to show locals that despite the area being relatively dry, it could still be successfully used for farming. In addition to tomatoes and onions, he also grows maize and keeps livestock, the main economic activity in the area. “Land selling is a big problem in Kajiado County. As you’re well aware, most land in Kitengela, Ongata Rongai and Ngong areas has been sold to real estate developers because there’s a belief that it can’t be put to any other use. However, most of those who sold that land can’t even afford to buy it back.”

The results of Joseph’s model farm, he hopes, may inspire change. From the five acres of tomatoes, for instance, he’s harvested 40,000 kilos this season, which he’s selling at Sh50 per kilo at the farm level, earning Sh2 million. Striking gold The farm employs nine workers full-time and another 45 during harvesting. The workforce comes from the local community. “There’s gold right here and that is what I wanted to show my fellow members of the community, and I’m thankful they’ve seen it,” Joseph says. He adds that from his farm, he’s come to learn that the first step to excellence in agriculture is having a constant supply of water, whether from a borehole, a water pan, a river or a lake. “Anybody can start small with enough water. I invested about Sh1 million in the borehole we use here, but that shouldn’t be the measure of success. A farmer just needs a way of getting water, no matter its source.” Investing in quality, certified seeds is another pillar of success, as is the minimal use of pesticides. “Olaitotioni doesn’t use herbicides – we depend on manual weeding. We want to be as organic as possible. The farm doesn’t use artificial fertilisers either because we want to keep the soil pristine and undefiled.” To pump water from the borehole to an overhead tank, Joseph has invested in a solar-powered system that he says has helped him save Sh750,000 per month in electricity bills. “There’s a lot of solar power in Kenya. What we need to do is put in place policies that enhance the use of renewable sources of energy,” he says. “We also use solar because, from a spiritual perspective, we have to learn to use what we have, and heat from the sun is a God-given resource that we can tap.” To keep the soil nutritious, Joseph also plants beans between seasons. This helps with nitrogen fixation in the soil, which is important for the next season of tomatoes and onions. The lows Every venture has its lows. For Joseph, these include the deplorable condition of a seven-kilometre road that leads to his farm and is barely passable during the rainy season. “The Government might be talking about eradicating food insecurity, but food security is about affordability and accessibility. Food in Kenya is affordable but not accessible,” he says. The priest says that if the Government wants to get more people to invest in the agricultural sector, then it must prioritise infrastructure that reaches the farms where food is, so that the food can get to the markets.

Covid-19 changes that may linger longer