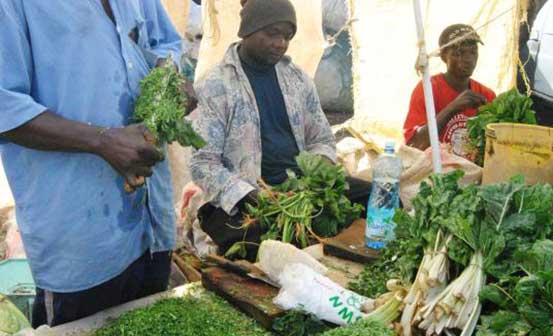 High levies imposed by county governments and manipulative middlemen may be the reason the food on your plate costs so much.

For a simple meal of ugali and sukumawiki, popular with many households in Kenya, it may cost about Sh150. This is as a result of transport cost, cess tax, brokers’ fee and market levies contributing to more than half (57 per cent) of the total cost of the meal.

This is according to findings by Kenya Markets Trust, an organisation that partners with public and private sectors to promote sustainable growth in markets. Of the Sh150, Sh13.50 is cess tax while Sh9 is brokers’ fee. In addition, Sh7.50 goes to market levies while transport takes Sh55.50. This means that fixing these components is key to bringing down the cost meals. Produce cess, a form of levy charged on domestic agricultural trade, is becoming common as devolved units strive to reduce their reliance on funding from the National Government.

Apart from Nairobi and Mombasa that are backed up by their well-established industrial and service sectors, the rest of the counties get about 70 per cent of their revenue from the National Treasury. In the process of trying to plug the 30 per cent gap in their budgets, county governments have turned to their own locals, imposing cess and other taxes. This has in the end slowed business activities and led to a rise in prices of most agricultural commodities.

According to KMT research titled ‘The Burden of Produce Cess and Other Market Charges in Kenya,’ a marginal one per cent increase in cess was found to cause 0.7 per cent increase in average distribution costs. The legality of such taxes was once a subject of litigation but the counties that had been taken to court moved to legalise the taxes through finance bills in their respective county assemblies.

This has left different market players complaining about multiple cess levies that are straddled across main trading routes in the counties. In 2013, Cereal Growers Association (CGA) moved to court but the judge ruled in favour of counties.

CGA Programmes Manager Antony Kioko feels that the introduction of cess was a rushed up exercise. “There was no public participation in coming up with the cess taxes. We need to get into national conversation that can lead to a uniform solution,” said Kioko. Findings by KMT, the first study on the impact of cess, showed that the levy was highest in onions, accounting for 29 per cent of total distribution costs.

Illegal levies are rampant in the milk business. For a litre of milk, eight per cent of the price paid by consumers is due to money that farmers paid to people who never submit the money to county kitties. This is in addition to cess and market levies of 14 per cent. Fish business, mostly done by women, is also affected. Despite cess and market levies being just four per cent, brokers have taken advantage. For the price of a kilo of fish, over half of it (52 per cent) is pocketed by middlemen.

Dr James Nyoro, formerly an advisor in Deputy President’s office on agriculture, says that despite brokerage being crucial for businesses, in Kenya it has been used at the expense of traders.

“Bokerage is not competitive in Kenya. There are cartels who dictate who should come in and exit. Economics dictate that if it is attractive to brokers, it should attract others so that it balances the market. This is not the case here,” he explained.

Maize, Kenya’s staple food, is not spared either. The price of a 90 kilogramme bag is where it is thanks to cess taking up 16 per cent of the price as market levies and brokerage account for 14 per cent. This, added to transport costs (40 per cent of distribution costs), has left traders with no option but keep the prices high. “A maize trader sourcing maize from West Pokot pays cess on leaving the area. On reaching Kitale, he dries the maize and re-bags it. Again, he pays cess on leaving Kitale for a Nairobi or Mombasa market to sell to millers who deduct further cess,” KMT study observed.

Under the devolved government structure, Robert Oswago, a research and development consultant who also lectures at Pwani University College, feels that produce cess should not have a place. “Roads are now significantly being handled by Kenya National Highways Authority. The funds for maintaining such roads comes from paying taxes. Counties have a role to maintain paths but I am yet to see them do this effectively,” argues Oswago.

Dr Nyoro says that the levy could work better if the counties had relied on evidence-based decision making as opposed to just a blind response to address budget deficits. Before the 2010 Constitution, the law required that 80 per cent of produce cess be used by the now defunct local authorities to maintain roads and sectors from which it had been charged. However, despite counties holding onto this levy now, the research by KMT found out that the produce cess charged on maize, milk, livestock, vegetables and fish is not being ploughed back to improve production and distribution of the taxed commodities.

“Cess charged across counties was not necessarily ploughed back to the sector. Instead, it ended up making the cost of food prohibitive and out of reach for most households,” said Chris Shimba, a Policy and Research Manager at KMT.

This negates the roles of cess tax. During a study that covered 12 counties interviewing 763 traders, the researchers say that most markets were in a sorry state with important facilities lacking. To worsen the situation, each county has its own cess, meaning that traders moving products across several counties end up paying multiple taxes.

The produce distribution chain becomes high, leaving traders with no option but pass the cost to consumers. In some cases, traders are subjected to unofficial cess, meaning that it benefits individuals at the expense of poor facilities along distribution chains. According to Shimba, a 10 per cent increase in cess is able to lead to eight per cent rise in prices of goods since most of the agricultural commodities are necessities.

Speaking in Nairobi last week when receiving the report by KMT, Industry, Trade and Cooperatives CS Adan Mohamed cautioned county chiefs that their actions could lead to slowed business investments.

“We want to ensure that once you’re doing business in a country, you pay the taxes of operating within the country. We have no business charging a person doing business in one county when their vehicle steps into another county,” said Mohamed.

Previous article
CORD unveils branded choppers to be used for campaigns
Next article
Pregnancy made me hate my husband's voice, cooking