Reports: Arsenal have reached an agreement with Manchester City to sign Gabriel Jesus

By Standard Sports | 1mo ago

Gunners are expected to announce the signing of Manchester City striker Gabriel Jesus after agreeing personal terms with the Brazilian over a five-year deal.

Reports emerged of a £45million deal being struck between City and Arsenal for the Brazilian forward on Friday (June 24).

According to The guardian.com, Jesus’ compatriot Edu, Arsenal’s technical director, and head coach Mikel Arteta were a key factor in Jesus accepting the offer to move to the Emirates Stadium.

Transfer guru Fabrizio Romano also confirmed that all paperwork has now been completed in a tweet; 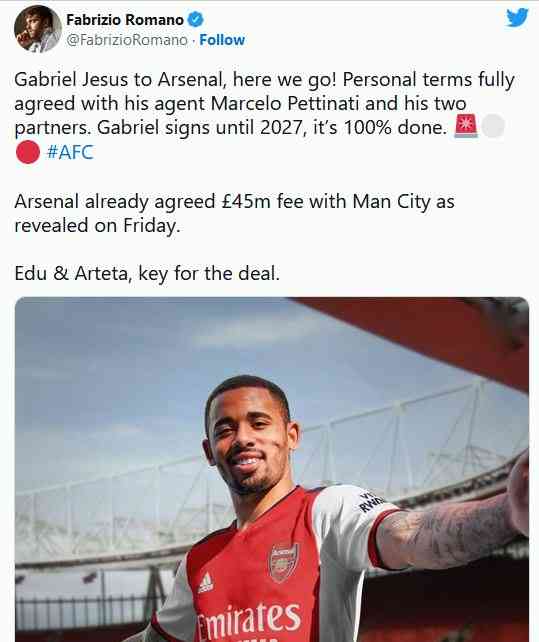 Jesus’ Arsenal wages are expected to be in the region of £10m-a-year.

Jesus signed for Manchester City in January, 2017 and Arsenal would be only his third club.

With 236 appearances for City, Jesus has scored 95 goals, with 46 assists, picking up 22 yellow cards and no reds.

Jesus, who turned 25 in April, has an immense amount of experience in the Premier League, the Champions League and plays for Brazil.