How VP Mwai Kibaki once poured his heart out to press

By Caleb Atemi | 5mos ago

“Leadership is the capacity to translate vision into reality” - Warren Bennis

The silence was heavy and palpable. His eyes scanned the room, keenly looking at each and every journalist seated. He was probably trying to pick out the fake journalists. Satisfied, he smiled, sat up, cleared his throat, and started to speak. He didn’t have any written statement but he spoke in parables.

Mwai Kibaki, then Minister for Health, knew that every political function would be invaded by security personnel from the dreaded Special Branch squad. These devious and vicious police officers masqueraded as journalists and even infiltrated newsrooms. They were known and feared for the disappearance and death of those considered to be anti-government.

Kibaki had been under intense political pressure. After Moi dropped him as vice president, his rivals intensified campaigns to have him removed from the government completely. The war on Kibaki started soon after the failed 1982 coup. The fact that the Kenya Air Force Commander at the time, Major General Kariuki, hailed from Central Province, Moi was convinced his VP may have been privy to the coup plot.

Kibaki was in his Othaya home when the coup happened. The then Central Provincial Commissioner David Musila had to hide him for hours in a tiny, dark, and dusty store at the Nyeri Club. In his memoir Seasons of Hope, Musila says when the coup began to unfold, he had to make sure the VP was safe.

“The first place I thought we could hide him was at the Nyeri Club. We found a tiny storeroom, small and somehow unhygienic, and locked him in it. I reasoned that the coup plotters would not think of looking for the VP in a place like that,” Musila says.

Later, after the coup had been contained, Moi called Musila’s house to get a brief on the security situation in the region. Kibaki was present when the call came in. When Musila told Moi that his VP wanted to talk to him, Moi said No and he hang up. Even when Kibaki’s father was murdered by one of his employees, Moi didn’t attend his burial but sent Cabinet Minister GG Kariuki to represent him.

The quiet man from Nyeri, therefore, learned to manoeuver his way through the complex political web without being entangled. On this day, at his private office in Nairobi’s Finance House, he spoke painfully about his tribulations. He never mentioned names. He never attacked any individual. When he paused, at some point, I asked him; “Sir, is your situation similar to Leo Tolstoy’s War and Peace?”. His balding face suddenly broke into a big shiny smile and he said: “Yes, Bwana Atemi. It is indeed like War and Peace.” We then plunged into the discourse of the great Russian classical novel and even delved into Sun Tzu’s Art of War. Kibaki then stood up, picked up his notebook, and thanked members of the press for attending. One journalist asked him; “But Sir, you have not said much in your press…” He quickly interjected; “Bwana Atemi can brief you.”

It was a joy covering Kibaki. He was energetic, brilliant, and deeply intellectual. He never shouted or raised his voice as other politicians would. He rarely lost his cool, save for the 1988 infamous and mlolongo election, where those with the longest queues were declared losers. He snatched the microphone from the presiding officer and told the gathering that “even rigging required some intelligence.”

When not covering his function, we would occasionally join him for lunch at Parliament Buildings or a drink once in a while. They were quiet sessions filled with intense discussions on local and global issues ranging from politics, and economics, to science and technology. Those of us who cherished the independence of the press were comfortable in Kibaki’s company because everyone bought his or her own drink or meal.

I would later encounter Kibaki when I served as public relations manager at the NSSF. Despite his ill health during the early days of his presidency, his memory remained sharp; he remembered his old media friends. During a Labour Day luncheon sponsored by Cotu at the Stanley Hotel in 2009, I was startled when my name was called out.

“The president wants to see you,” I was told. I walked to where he was. I stood between him and his VP Kalonzo Musyoka. He held my hand and said: “This young man is diligent and hard-working. I know he will take good care of the workers’ money at the Fund. Please take good care of him too.” His words were targeted at members of the Board of Trustees of the NSSF.

Earlier in 2007, during the Mombasa ASK Show, I got information that my boss at the NSSF, Racheal Lumbasyo was being replaced through a coup. Someone else was about to be installed as Managing Trustee when the entire board and management were in Mombasa. I quickly briefed Kalonzo Musyoka and we both, in the company of Lumbasyo, approached Kibaki at the dais. He listened carefully, called the head of Civil Service Francis Muthaura, and instructed him to; “stop this madness.”

I had instructed my colleagues in Nairobi to ensure that the man who was poised to take over doesn’t enter the Managing Trustee’s office or boardroom. Kibaki saved my boss from the planned embarrassment.

I came to appreciate Kibaki’s love for economic matters in 2009. During the Nairobi International Trade Fair, our NSSF stand had performed dismally and failed to clinch the first or second position as had been our tradition. The president traditionally visited all the stands that scooped the first position.

That year, the Kenya Ports Authority had beaten us to the first position. The KPA stand stood next to ours. I was brooding over the loss when my boss, Alex Kazongo, and some board members teased me: “If you are that connected and influential, why don’t you bring Kibaki here today?” “Let me try,” I responded and immediately called the head of the Presidential Press Unit, Isaiah Kabira. I briefed him on the billions that NSSF held which could be used in infrastructure development. Kabira said to me: “Atemi, that is exciting. Let me get back to you.”

Within minutes, members of the president’s security detail were buzzing all over our stand. They asked me to identify the key staff members and close the door to the public. Shortly after, Kibaki arrived. As my boss introduced him to the board and top management, he paused when he reached me. He held my hand, smiled, and said: “I hope you are still doing a good job?” I answered, “Yes sir.” I couldn’t tell him about the battles I was engaged in just to stay alive and keep my job and sanity.

Despite his brilliance and sterling service in government, Kibaki will be remembered for his political betrayals. Immediately after he took over power in 2002, he shortchanged his colleagues who had sacrificed money, sweat, and blood to campaign for his presidency.

David Musila says in his memoir; “Kibaki was inaccessible and the irony was not lost on many of us. It was as though an impenetrable wall had been erected around him.”

“Raila was furious at the shabby treatment by our coalition colleagues. He decided to go on his own to see the president. Saitoti, who was the new Minister for Education, had been to see the president on a routine visit, and on his way out found Raila at the gate and asked him what he was doing there yet Kibaki had already left. Raila had been waiting for two hours but without his knowledge, the president had already gone to his home in Muthaiga.”

In December 2002, when Kibaki took over the presidency, Kenyans were delighted and hopeful. I wrote in a Sunday Standard column that: “Kibaki has a chance of becoming a Nelson Mandela who could transform Kenya or a Mobutu Sese Seko.”

The betrayal and backstabbing created deep divisions in his government leading to a defeat of a Draft Constitution that had been put to a referendum test in 2005.

The post-election violence left deep ethnic scars. However, his achievements in economic growth, infrastructural development, education, health and ICT remind us of the words of Lao Tzu that; “A leader is best when people barely know he exists, when his work is done, his aim fulfilled, they will say: “We did it ourselves.” To his credit, Kibaki never boasted about any of his achievements. He created a great team both at the cabinet-level and in the civil service to run the affairs of the country and the people of Kenya said: “We did it under Kibaki.” 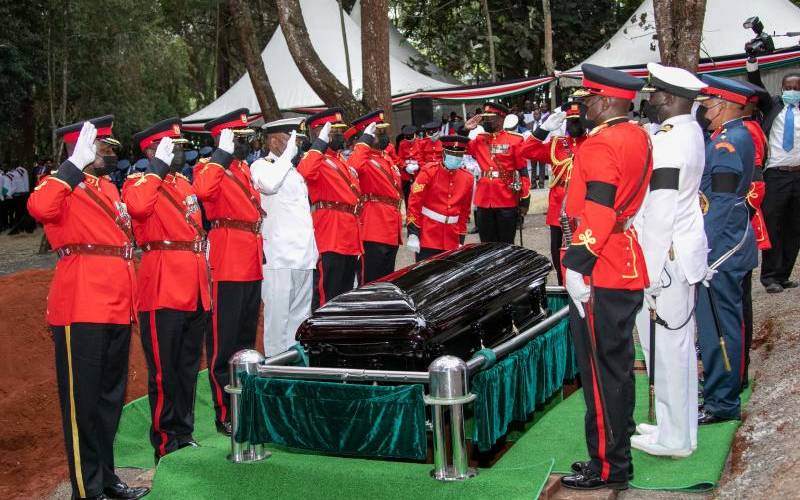 Leaders heap praise on Kibaki on farewell day
Uhuru, Ruto and Raila extol former president as father figure whose wit changed the country. There were political undertones despite clergy asking speakers to keep off politics.
National
By Wainaina Ndung'u By Wainaina Ndung'u
5 months ago 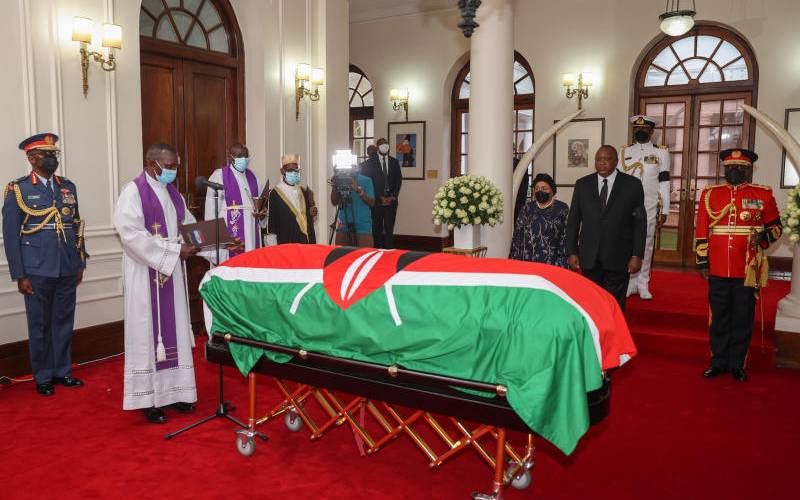 As we honour Kibaki, let us apply his honesty and decency
The laying of Kenya’s Third President to rest in Nyeri today ends the life of an iconic leader and a week of remarkable tributes from all over the world.
Opinion
By Irungu Houghton
5 months ago 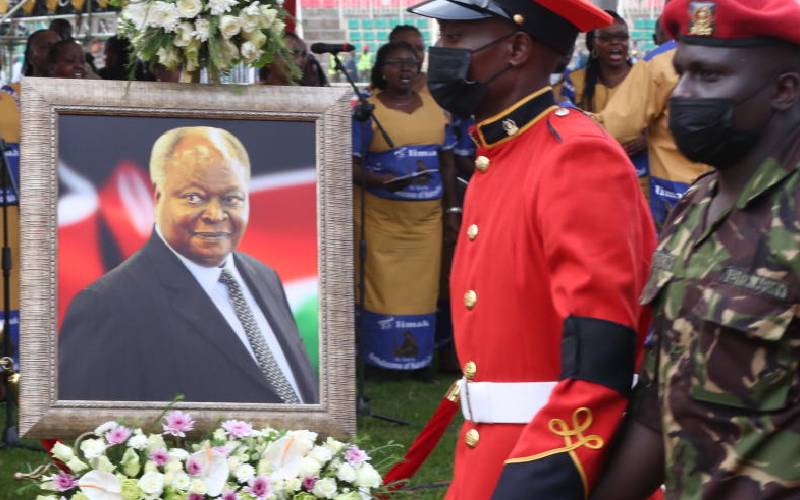 Kibaki's three 'innovations' that made us a stronger democracy
In refusing to “go after” President Moi after the NARC win, President Kibaki rejected reprisals and payback, so common in the continent, as a feature of future governmental transitions.
Opinion
By Kamotho Waiganjo
5 months ago 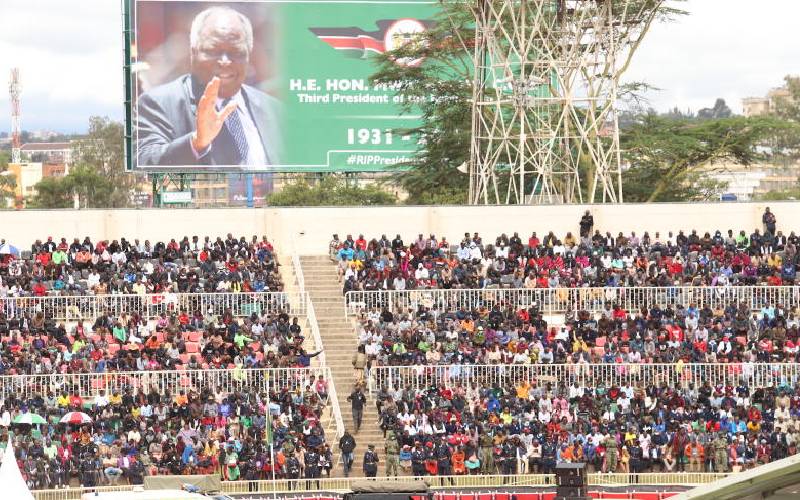 Kibaki House session deviated from the norm
To many Kenyans, he fits Sixth US President Jon Quincy Adams who once said if your actions inspire others to dream more, learn more, do more and become more, you are worth your salt.
Opinion
By Mark Oloo
5 months ago
.

By Betty Njeru 3 hrs ago
No cause for alarm after suspected Ebola case turns negative, Ministry says