Fauci says coronavirus could claim up to 200,000 US lives

America
Senior US scientist Dr. Anthony Fauci issued a cautious prediction Sunday that the novel coronavirus could claim as many as 200,000 lives in the USA. 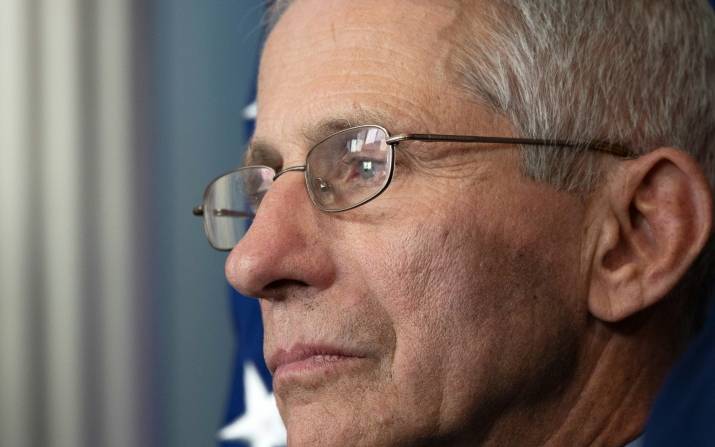 Senior US scientist Dr. Anthony Fauci (above) issued a cautious prediction Sunday that the novel coronavirus could claim as many as 200,000 lives in the United States, as state and local officials described increasingly desperate shortages in hard-pressed hospitals. And with stress, uncertainty and exhaustion rising across the country, House Speaker Nancy Pelosi squarely blamed President Donald Trump for the unnecessary loss of life by initially playing down the pandemic. "His denial at the beginning was deadly," she told CNN's "State of the Union." She added, "Don't fiddle while people die, Mr. President."

SEE ALSO: 'I had no choice': Sex for rent rises with coronavirus poverty

Dr. Fauci, who leads research into infectious diseases at the National Institutes of Health, played down worst-case predictions of one million or more deaths, instead offering a rough estimate of 100,000 to 200,000 deaths and "millions of cases." But Fauci, a leading member of Trump's coronavirus task force and for many Americans a comforting voice of authority, quickly added, "I don't want to be held to that ... It's such a moving target that you can so easily be wrong and mislead people." By way of comparison, a US flu epidemic in 2018-19 killed 34,000 people. COVID-19 has hit the US with explosive force in recent weeks, following a path seen earlier in parts of Asia and Europe. It took a month for the US to move from its first confirmed death, on February 29, to its 1,000th. But in two days this week that number doubled, to nearly 2,200 on Sunday. The case total of 124,763 -- as tallied by Johns Hopkins University -- is the world's highest.

"This is the way pandemics work, and that's why we all are deeply concerned and why we have been raising the alert," Dr. Deborah Birx, the response coordinator for the White House task force, said Sunday on NBC. "No state, no metro area will be spared." - 'A sharp escalation ahead' - In the US, the epicenter has been New York City, with 672 deaths so far. Hospital staff have issued desperate pleas for more protective equipment. Mayor Bill de Blasio said Sunday that his city's hospitals have enough protective equipment for only another week. He said he had made a direct request to Trump and the US military "to find us immediately more military medical personnel and get them here by next Sunday."

De Blasio credited federal officials with being "very responsive," but added, "we're talking about a sharp escalation ahead." New York governor Andrew Cuomo said the statewide death toll had risen to 965 from 728 a day earlier -- its largest one-day jump yet -- and he extended by two weeks an order for nonessential state employees to continue working from home. Early Saturday, Trump had floated the idea of a "quarantine" for New York and two neighboring states, but when state officials and health experts questioned the idea -- which Cuomo derided as "preposterous" and "a declaration of war on the states" -- the president dropped it. Instead, the federal Centers for Disease Control issued an advisory urging people in New York, New Jersey and Connecticut to avoid non-essential domestic travel. In Washington state, where the disease first struck with force, Governor Jay Inslee described "a desperate need for all kinds of equipment." He said the nation needed to be put on an essentially wartime footing.

Inslee pushed back against the notion, advocated earlier by Trump, that the country could begin returning to work by Easter, which is April 12. "There are some hard realities we have to understand," he said on CNN. "Unless we continue a very vigorous social distancing program in my state, this will continue to spread like wildfire." - 'Worse by the minute' - Governor Gretchen Whitmer of Michigan also described a deteriorating picture, especially in her state's largest city, Detroit. "We had a thousand new cases yesterday," she said. "We know that number will be even higher today ... The dire situation in Detroit is getting worse by the minute."

Whitmer bemoaned a system that has states competing against one another for desperately needed supplies. "We're bidding against one another, and in some cases the federal government is taking priority," she said. "It's really, I think, creating a lot more problems for all of us." Pelosi said earlier that Trump's "continued delay in getting equipment to where it's needed is deadly." Dr. Birx, the task force coordinator, declined to say what her recommendation would be to the president in the next few days about an eventual easing of work and travel restrictions, but she offered this advice: "Every metro area should assume that they could have an outbreak equivalent to New York, and do everything right now to prevent it."

Trump says he will suspend all immigration into U.S. over coronavirus

Trump says he will suspend all immigration into U.S. over coronavirus

Trump cuts WHO funding over coronavirus

Coronavirus: Nearly 2,000 dead in one day in the United States

Coronavirus: Nearly 2,000 dead in one day in the United States