Blame game over alleged foreign trip to save Sonko

Nairobi
MCAs trade blame over Dubai trip to save governor. 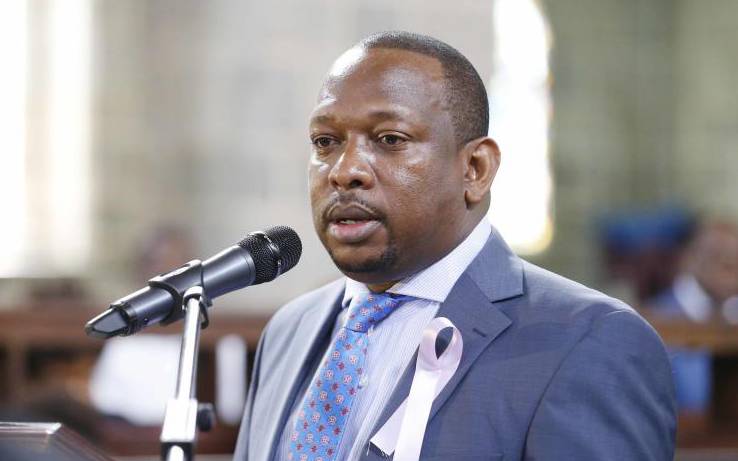 A blame game ensued yesterday over a plot to frustrate the impeachment of Nairobi Governor Mike Sonko (pictured) by flying some MCAs out of the country.  This would have denied the motion requisite numbers should it have been introduced in the House. Details of a plan to fly out 18 MCAs to the United Arab Emirates (UAE) this month, when the motion was expected to be tabled at a special sitting in the County Assembly, drew accusations and counter-accusations by rival factions at City Hall.

Some of the MCAs listed in the group that was to travel to Dubai denied knowledge of the trip, claiming the ousted House leadership was behind the narrative to portray rivals in bad light. “We know who is behind this letter and they are trying to do it for political mileage,” said Morris Gari, the Nairobi West MCA who is among the 18, according to a letter seen by The Standard. The MCAs were to be accompanied by three assembly staff for the trip that had already been approved by the Finance and Economic planning chief officers. Deputy Majority leader Millicent Mugadi said the firm that had purportedly invited the MCAs for the Dubai conference was the same one that had hosted the former House leadership on several occasions. But former Majority Leader Abdi Guyo, who has been accused of fighting Sonko, said he had nothing to do with the leaked letter. “I am not aware of any trip and I have nothing to do with spreading the narrative,” said Mr Guyo. The letter from the office of the clerk and addressed to the county secretary requested the Executive to help facilitate the ward representatives who had been invited to Dubai by different institutions for 11 days as from December 19 to December 29. Interestingly, reasons for the visit were not indicated.

On December 11, Minority Leader David Mberia had written to Speaker Beatrice Elachi, asking for an extension of Assembly sittings to discuss the leadership vacuum in Nairobi. This following a court order barring Sonko from accessing office. Minority Whip Peter Imwatok had said he would use the special sitting to table a censure motion against Sonko, saying he had collected 82 signatures, enough to support his bid to oust the governor. The Assembly has 123 MCAs and two-thirds majority - 82 - are needed to pass an impeachment motion. Without 18 MCAs, it would reduce the numbers to 105, which would mean the governor’s supporters would need to convince 24 to shoot down the motion. Elachi, however, did not approve the special sitting, saying she was waiting for an advisory from the Attorney General on the way forward. For the Dubai trip, the Assembly had sought the Executive to assist in facilitation of the MCAs living and transport expenses.

“The Nairobi County Assembly would like to request the county Executive to finance the delegation to attend this important symposium. The duration of the visit will be 11 days from December 18 and 28, 2019,” read the letter in part. “The Nairobi County Assembly is requesting the Executive to cater for all the living and transport expenses during the period. This is therefore to kindly request your office to facilitate the members and staff to enable them to travel to Dubai,” read the letter dated December 10, 2019.”  The members of county assembly staff named as accompanying the MCA's were acting County Clerk Monicah Muthami, Asman John and Joseph Katoloki. Majority Leader Charles Thuo refuted the claims.