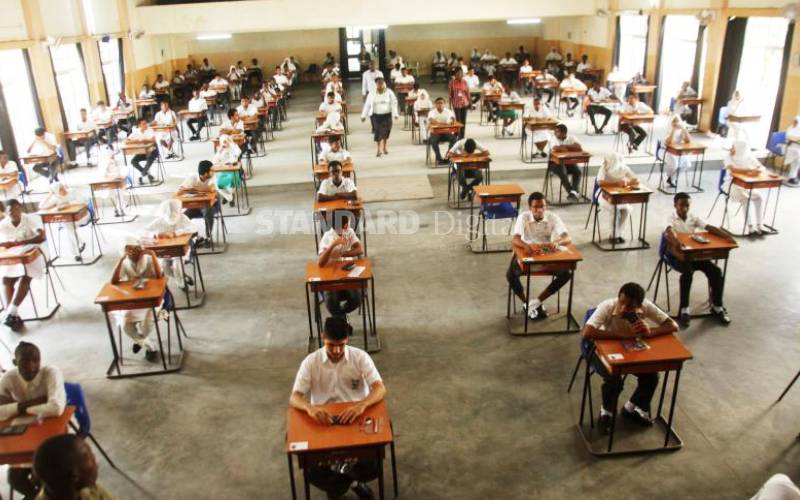 Three Cabinet Secretaries will meet today for preparations to secure national exams as authorities announced tough penalties for cheating culprits in this year’s examinations. The Kenya National Examination Council (Knec) yesterday warned its staff and the public against abetting cheating in the upcoming national examinations. In an interview with The Standard yesterday, Knec Chief Executive Officer Mercy Karogo said the provisions of Knec Act on penalties were clear.

“A member, officer, agent or staff of the council whose omission or commission leads to an examination irregularity commits an offence and is liable, upon conviction, to imprisonment for a term not exceeding five years or a fine not exceeding Sh5 million, or both,” said Dr Karogo.

The warning comes as Interior Cabinet Secretary Fred Matiang’i and his Education counterpart George Magoha are set to hold a high-level examination planning meeting today. Information and Communication (ICT) Cabinet Secretary Joe Mucheru and Teachers Service Commission (TSC) secretary Nancy Macharia will also attend the multi-sectoral team meeting at the Kenya School of Government. The Standard established that during today’s meeting, new padlocks and keys to the metallic containers where the examination papers will be stored will be handed over to regional security officers. Some 479-strong metallic containers will be used for storage of examination papers in 338 sub-counties.

The candidates may also be disqualified from taking the entire examination and if the person has already taken a paper, it shall be cancelled by the council and maybe prohibited from taking an examination for a period not exceeding three years immediately after commission of the offence. Prof Magoha said the multi-sectoral approach of management of examinations was still active and cautioned anyone against breaching relevant rules. “The script of managing the examinations this year will contain a few enhanced measures aimed at sealing minor loopholes that criminals attempted to use last year to introduce cheating, mainly at the KCSE examination,” said Magoha. Knec investigations on 2018 examination cheating identified collusion as the prevalent method used by candidates. Candidates answer scripts had similar errors in calculations. Some had correct responses after incorrect working, while some had similar wordings and numerous identical corrections.

Other forms of collusion were cases where candidates had identical readings in science practical and cases where answers were copied from textbooks or notes or answers prepared outside the examination room. Today’s meeting will be the culmination of a series of engagements Knec has held in the past few weeks. Last week, a team of about 500 examination monitors met in Nairobi to be briefed on various ways of mitigating cheating. Inspector General of Police Hillary Mutyambai, directors of national security agencies, regional police service commanders and examination officials attended the meeting.