‘I have to go’: Bobi Wine ends interview as military raids home

Wine, 38, of National Unity Platform, is among the 10 candidates challenging President Yoweri Museveni in the Thursday's presidential election. He has been vocal with how the military has been using excessive force on his party members.

“So I am sorry even right now as we speak, we are being raided by the military. I have to end the interview because I can see soldiers beating up my security guards. I have to go down and give it attention,” Bobi Wine told Hot 96 broadcasting from Nairobi, before ending the call.

The Opposition leader took to social media to express his frustrations and condemn the act.

“The army has this morning raided my home, arrested all my security guards and anyone they could see around my premises. No reason for the arrest was given. Such acts of impunity are all kicks of a dying horse,” he posted on Twitter.

Wine accused President Yoweri Museveni’s regime of arresting his entire campaign team and having military conduct similar raids in the homes of members belonging to his camp.

“Gen. Museveni needs to tell the world what he intends to do in this election that he should arrest my entire campaign team, my assistants & supporters. Last night, the military yet again arrested so many friends and comrades; two days to the election,” he said.

President Museveni has been in power since 1986. He is one of the longest-serving presidents in Africa having ascended to power at the end of a five-year war in Uganda.

In 2017, the county changed her Constitution removing the age limits for presidential candidates, thus clearing path for Museveni to run for a sixth term in 2021.

In the run-up to the 2021 elections, the East African country has been marred with chaos, killings and crackdowns on rallies of opposition camps with human rights groups condemning the act.

“The actions of President Museveni’s regime are in blatant violation of its international obligations under international law. The ongoing attacks on the rights to freedom of expression, association, peaceful assembly as enshrined in the UN Charter and associated instruments, the instruments of the AU and the Treaty Establishment of EAC,” a statement by-election observers. 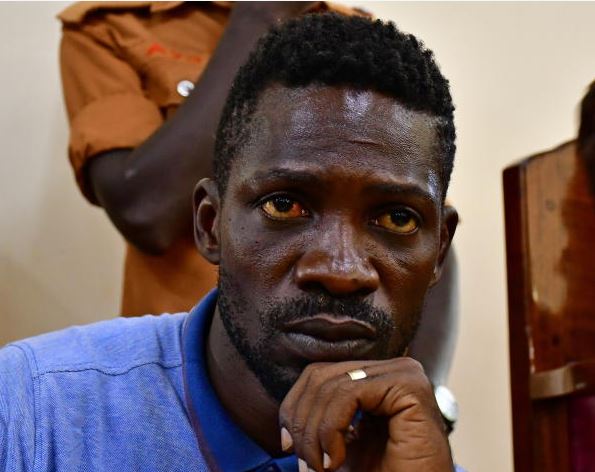 Several supporters of Wine (pictured) have been killed as authorities moved in to disperse crowds claiming the move is to stop the spread of Covid-19.

And yesterday, Facebook went ahead to shut down accounts of top Uganda officials who have been accused of seeking to manipulate public debate ahead of the elections.

Facebook's head of communication for sub-Saharan Africa, Kezia Anim-Addo in an email to a news agency AFP, said accounts of a section of leaders manipulating content on its platform had been removed.

“This month, we removed a network of accounts and pages in Uganda that engaged in CIB (Coordinated Inauthentic Behaviour) to target public debate ahead of the election,” Kezia Anim-Addo told AFP.