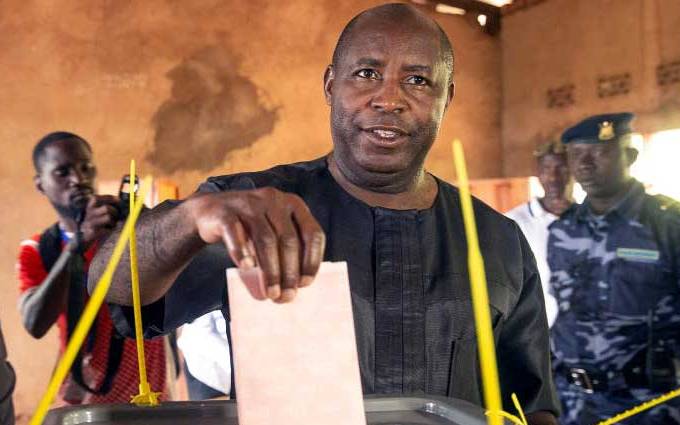 Burundian President Evariste Ndayishimiye has assured the world that the country is stable, calm and entirely safe. He said Burundi is open and ready to nourish its partnership with her neighbours for economic development.

Ndayishimiye (pictured above) spoke during this year’s virtual address by various Heads of State at the United Nations General Assembly (UNGA).

In his debut address to the 75th UN General Assembly, Ndayishimiye said Burundi progressed in peacebuilding and consolidation of democracy despite the challenges the East African nation is facing.

Burundi has repatriated thousands of refugees from neighbouring countries, and particularly Rwanda. Burundians who fled the nation after political violence in 2015 sparked by then-President Pierre Nkurunziza’s decision to run for office for a third term have already started returning home.

During his address, Ndayishimiye said the country welcomes the voluntary return of refugees who had fled the nation following the sorry episodes that have left a sad mark on Burundi’s history.

Ndayishimiye further noted that the mass voluntary return is a clear demonstration of the restoration of peace, calm and stability in the country.

Political analysts argue that the process of repatriating the people back shows that the nation is ready and willing to bury the past and rekindle the deteriorating diplomatic relations with her neighbour- Rwanda. Kigali has accused Bujumbura of being ‘’ disinterested’’ in solving the issue.

The two neighbours have had their fair share of challenges, politically and diplomatically.

President Ndayishimiye added Burundi managed to organise and fund a free, fair and peaceful election between May and August 2020.

According to Ndayishimiye, funding the election using natural resources showed the strength of Burundi. He urged the people to take ownership of their political system without external interference.

He further added that the foundation for strong democracy had already been laid, and what was remaining is working for development.

‘’Development is the backbone of Burundi’s fight against poverty, this is a fight that requires wisdom, bravery, perseverance and a heightened sense of patriotism and work ethics,’’ said Ndayishimiye

During the tenures of former presidents, Kibaki and Nkurunziza in 2011; Kenya and Burundi signed a comprehensive bilateral agreement to promote development and technology transfer in agriculture, livestock and fisheries development.

In 2019, Burundi allocated the Kenyan government land for constructing an embassy.

Burundi’s ambassador to Kenya Jean Bosco Barege told Standard Digital that Burundi is opening its doors to investors from Kenya and the East African Community to invest in the Burundian market.

Ambassador Barege, who was redeployed from Kampala to Nairobi in September 2019, said Burundi is stable and security is tight for the business environment.

‘’Burundi is now calling everyone to come and invest with us, registering a company in Bujumbura will take an investor only 3 hours, the environment is smooth, we have strong policies, come and invest,’’ reiterated the diplomat.

He further added that countries drawn from the East African Community (EAC) should enhance and strengthen the intra-regional trade and invest amongst each other. He said Burundi is still untapped.

‘’Kenya is a regional hub, I call upon everyone, investors, tourists, students- come and visit Burundi, explore more on the untapped, Burundi is ripe for investment,’’ noted Barege.

The Burundian envoy told Standard Digital that he will work tirelessly to take Burundi- Kenya relations to another level.