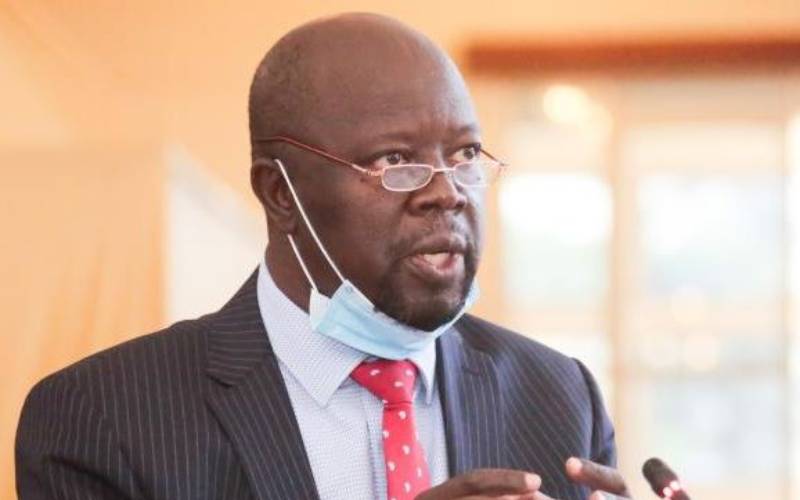 With about seven months to the next General Election, Trans Nzoia Governor Patrick Khaemba (pictured) is under pressure to complete development projects initiated during his tenure.

Khaemba is currently serving his second and the last term in office, and residents want him to accomplish flagship projects, some of which have stalled.

The Sh1.3 billion county referral and teaching hospital and Kenyatta stadium are among some of the incomplete projects.

Some leaders, led by Woman Representative Janet Nangabo have piled pressure on the governor to ensure stalled projects are completed before he exits office.

On Tuesday, Nangabo and Senator Micheal Mbito said it would be a disservice to residents if the governor leaves office with projects he initiated incomplete.

The leaders said the money allocated to complete the projects should be accounted for.

"I would want to occupy the office and start new projects and not to inherit stalled projects when money was allocated for their completion," said Nangabo, who has joined the race to succeed Khaemba.

She said residents had not felt the value of funds disbursed to the county in the past nine years.

"There is a serious problem in our county. Despite the county receiving millions of shillings, there is little to show. What we are seeing is incomplete projects. Those in leadership should explain where the money is," Nangabo said. Dr Mbito said it is discouraging that he has been fighting for the disbursement of more funds to finance projects in the county, but there is no impressive development.

"The people of Trans Nzoia need better services. They need projects that would help them tame poverty, and those in power have to explain how money was used," he said.

He said poor leadership at the county government has led to wastage, adding that those involved in corruption should be held accountable.

But Khaemba defended his performance and blamed delayed disbursement of funds for the slow completion of the projects.

He said the county referral and teaching hospital is partially operational but requires an additional Sh2 billion to be fully operational.

"Some leaders make alarming and misleading reports about my performance. These are the same people who have not bothered to work with me to propel the county," said Khaemba.

The WRC event exposed the weaknesses of the homologated Kenyan machines that were unable to compete against the overseas shipped rally cars.