Olympic sprinter Usain Bolt has announced he is expecting his first child with girlfriend Kasi Bennett.

The pair have been dating for five years and are now set to become parents after Bolt revealed their good news to the world via Instagram.

In a post uploaded on Thursday morning, Bolt unveiled a picture of Kasi holding her baby bump, along with the message: "I just want to say a KING or QUEEN is about to be HERE."

Kasi, 30, then took to her own Instagram account to share their joy, writing in various posts: "Our golden child. Coming soon... Our greatest celebration... Our biggest blessing."

Bolt was quick out of the blocks during his illustrious athletics career but has been slower off the mark when it comes to starting a family.

The 33-year-old admitted recently the couple's plans to have children after enjoying a romance kept largely away from the public eye.

Fans and well wishers were quick to congratulate Bolt and his partner on the social media platform.

"Congratulations to you both," one fan wrote, while another said: "God bless your family."

And this could be the first of many if the Jamaican's comments in a 2016 interview are anything to go by. 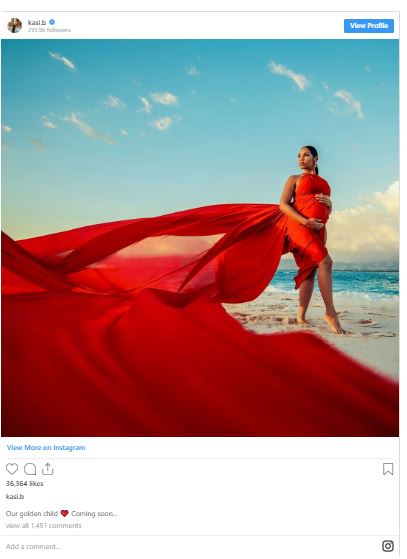 Speaking to People magazine on his romance with Kasi, he said: "We just got really serious, we are taking it one step at a time. I definitely want a family, though. For me, over the years, I've waited because I want to make sure it's the right person.

"I’ve always said I want three kids. The other day I hung out with my buddy who has three kids and it was crazy. I was like, 'Hmmm do I really want 3 kids?' But yes, yes I do. I’m sure of it."

Bolt has more time on his hands to become a doting dad, after retiring from athletics in 2017, while Kasi currently splits her time as Managing Director of Elevate Marketing House Ltd, and her work with Project Case - a non-profit organisation aiding children in Jamaica, which she founded.