Men who cannot say ‘I love you dad' 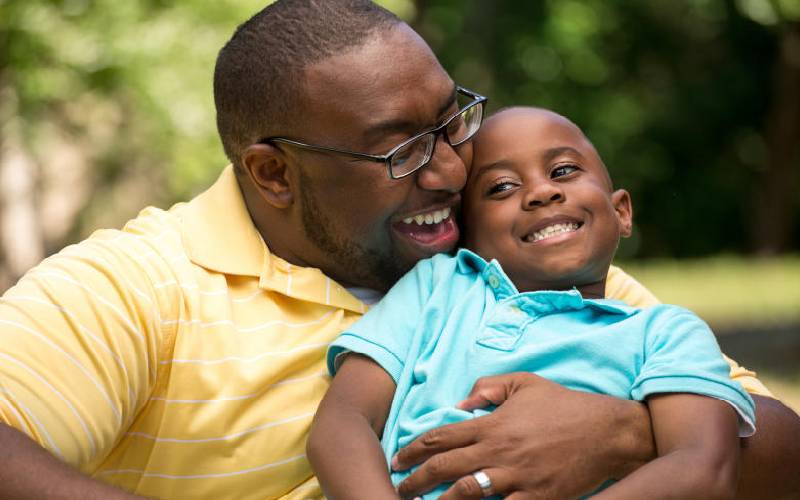 When Dennis Waweru first heard the words “I love you” from his father, he panicked. It was a text message. He thought something was wrong.

“I was in a meeting,” says Waweru, an accountant in Nairobi. “I excused myself and called my sister, then my mum. My dad had been struggling with high blood pressure, and I was worried that something had happened. It turned out that he had just been drinking with his friends. He sent similar messages to all his children. But it was shocking. He had never said that to any of us, especially to me.”

Waweru’s case is one many men can relate to. ‘I love you’ is simply not something men expect to hear from their fathers, and they certainly never say it to them. It’s unnatural and uncomfortable for some, and unnecessary for a lot of others. We have all heard the jokes about the stereotypical Kenyan father, who would rather say “Nyinyi wote ni watoto wangu”, or call his wife ‘Mama Junior’ instead of risking showing open affection by using her first name.

“It’s just the way we were brought up,” Waweru says. “Men don’t do certain things. I’m not very traditional, but I still find it difficult to say that to anyone, not just my dad. I love him, of course. But what’s the point of saying it?”

For Vincent Omondi, a carpenter in Embakasi who was trained by his father, the words ‘I love you’ were very common in their house, but they were never aimed in his direction.

“I have two younger sisters. My father spoilt them in every way he could since we were children. I know he had no problem saying ‘I love you’, because he said it to them all the time and accompanied with gifts and pet-names. It was almost like he was a different person with them.”

“With me, the conversations we had mostly revolved around work. He was very serious when we were working, professional. If you came into his workshop and watched us, you wouldn’t know we were related.”

For him, the behaviour was normal and even amusing. The few times his father was expressive, it was to tell him he was happy with the work they were doing. Or it was stiff and awkward.

“If he bought me something, he wouldn’t give it to me directly,” Omondi says. “He would leave it in my room, or send my sister to give it to me. When I told him thank you later, he would nod, and that would be the end of that. I think the closest he got was telling me he was proud of me after I graduated from university. He squeezed some money in my hand and patted me on the shoulder. He told me he was ready for grandchildren, and we joked about it a bit before moving on.”

Omondi knew he was loved, even if it was never said out loud. In his eyes, their relationship was good, like a father-son relationship should be.

“A man is not supposed to be emotional,” says Edwin Ogada, a teacher and businessman in Kakamega. “Men show their love, they don’t say it. My father’s way of showing us he loved us was by paying our school fees and putting food on the table. For me, it’s by spending time with my family. I think this idea of men being in touch with their feelings too much is wrong, and it teaches our young boys the wrong things.”

The reluctance extends to male acquaintances. Even with their closest friends, men rarely express affection. And yet, the bond is there.

When Bernard Mulei was involved in an accident a few years back, his friends took turns visiting him in hospital. Almost all his ‘bros’ came, but the dynamic remained the same. “We never talked about the accident,” Bernard says. “We cracked jokes, told stories. They kept me company and contributed to the hospital bill. They stood with me, just as they did when I was getting married, and when my dad died.”

Three little words, but why do men fear them so much?

“It’s a cultural thing,” says Faith Atsango, a psychologist. “It’s the way men are socialized, and the way we parent boys. The expectations are for them to be hardcore, so they shy away from being so emotional. There is a cultural association with sex. Saying I love you should be about affirmation, but there is an element of sexuality to it, which is why men are afraid of saying it to another man. It can even be seen as gay.”

Even so, it is important for parents to say ‘I love you’ to their kids as “when you’re not told that as a child, you grow up seeking affirmation from the wrong places. We see this mostly on social media. People posting photos begging for Likes and retweets. Everything starts at home. Caregivers, notably parents, need to tell their children they love them.”

Atsango also reckons that “it doesn’t even have to be you telling them you love them. Spend time with them, listen and talk to them. Even when you’re disciplining them, let them know why you’re doing it.”

Dr Halimu Shauri, a sociology professor and Dean at Pwani University, believes saying ‘I love you’ is not African.

“African culture has no room for those things. They’re foreign. Our mother tongues don’t have the concept of saying ‘I love you’. If you look at most African languages, the equivalent of ‘I love you’ is foreign. In Swahili, for example, there is no distinction between like and love.”

But it also comes down to how we’ve been socialised, from the moment we were children.

“We are born as blank pages and we begin to learn through the process of socialisation. We all participate in this process, led by agents. The family is the first agent of socialisation, mothers and fathers. We also have friends, schools, church or mosque, and the media,” says Dr Shauri adding that affection is learnt physically and verbally from home.

Love through actions, according to Dr Shauri, is the African way, and it is deeper than the verbal equivalent.

“We do love each other, but it’s not expressed verbally. It’s very strange to tell your parents or even your sister you love them. We express our love through actions. This can be shown through acts of bonding, for example. When you’re happy with someone and you love them, you spend time with them and bond. Actions should show love, not words. Words don’t mean anything,” says Dr Shauri.

A lot of people use money and material things as indicators of affection. While this is not inherently bad, Atsango advises against substituting material possessions for affirmation.

“People who use money as a substitute for love, or as a way to attract it, are usually compensating for something they didn’t have. You see someone struggling to show that they have a big car, they have money, they can get any girl they want. If you dig deep, you’ll see that this person wasn’t affirmed as a child, so they’re using that affluence as a substitute.”

The best remedy, she advises, is self-love, self-affirmation, accept your shortcomings and also “admit you were probably not raised to be a certain way and take active steps to make yourself better. Take yourself out, treat yourself to a coffee. Don’t wait for someone else to do it. The people we see stuck in bad situations are struggling with that idea that they’re not enough, and if they lose that relationship no one else is going to love them.”

The President cautioned that the emergence COVID-19 threatens to reverse the gains made.