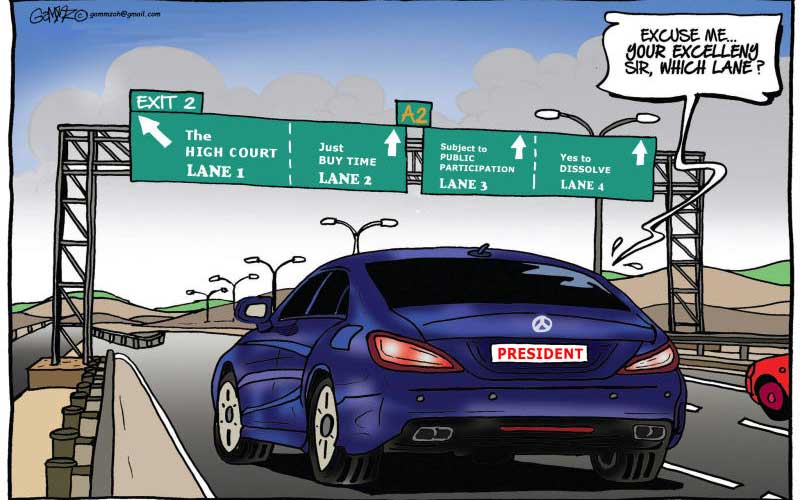 It was first of all, a shocker to the political class used to having their way on many things. Citing Article 261 of the Constitution, Mr Maraga advised President Uhuru Kenyatta to dissolve Parliament. Many are wondering how the CJ could unilaterally make a decision that has far-reaching consequences to the country.

Yet looked at critically, Parliament has only itself to blame for the quagmire it find itself in. The borne of contention is the two-third gender rule. The Constitution prescribes sudden death when Parliament fails to legislate this critical requirement aimed at uplifting the lot of the women and most rural folk who are poor and mostly women.

Considering that the orders were issued in the 11th Parliament, it is fair to say this has been a hot potato no one wanted to touch. But someone had to do something about it anyway.

The decision by the Chief Justice can be analysed broadly from two perspectives.

Those opposed to his advice and those who support have all given divergent explanations. The truth is many are excited about the consequences of Maraga’s edict.

And one would understand why. Parliament and politicians are a perfect punching bag for all what has gone wrong with the country. And there are many things that have gone wrong hence the outpouring of excitement.

But not for nothing; many of those angry about corruption in the country see MPs as willing accomplices in perpetuation of the vice that denies them opportunity and hence shortchanges the country.

There is a general feeling that the legislative assembly is inept and at worst, is in bed with the Executive and has, therefore failed in their oversight role.

So the support for Maraga has more to do with punishing Parliament and the Executive.

Because of the pain from the turmoil caused by the economic impact of the coronavirus pandemic and the poor economic outlook, many derive great joy from inflicting pain at the pampered, privileged MPs.

It doesn’t help matters that since the handshake, there is a general feeling that the country does not have an Opposition party who would ordinarily have stepped in to checkmate the administration.

The main opposition party ODM is now a de facto member of the government and increasingly, Raila Odinga, the partly leader has been defending and enunciating government policy.

To those feeling powerless and those angry at the blatant disregard of the law and the army of unemployed youth who feel that rather than offer solutions to their problems, the political class has rewarded themselves and squandered their resources, the Constitution has given them a chance to show who is the boss - that is if slinging out the MPs translates to that.

It is a “godsend” intervention to cause the much desired change where all served equally.

Meanwhile, the critics of Maraga’s decision argue that the Chief Justice is a bitter man who found a chance to pay back against a Parliament which has- with the help of the Executive- curtailed the operations of the courts by denying them funding and other critical resources.

Once or twice, the Chief Justice has complained in public that the government has given the Judiciary a raw deal. They have a point but I guess Maraga was just doing his job.

Others have looked at the merits and the demerits of the advice by Justice Maraga to the President to dissolve Parliament. The first question is; is it workable? What happens if Parliament is dissolved and mark you the term of the remaining IEBC commissioners is ending soon? Another challenge is what happens to the other elected officials like the President, Deputy President or Governors and MCAs.

The Constitution envisages that the elections of these officials is expected on the second Tuesday of August on the fifth year.

Does Maraga’s ruling imply all these officials must seek a fresh mandate? Yet others argue whether the Chief Justice alone could overturn the decision of millions who elected these representatives.

Whichever way it goes, this matter is not easy for anyone, least of all, the President.

Previous article
Consult widely on Maraga advice, Odinga tells Uhuru
Next article
Politics and the art of speaking in tongues

Cracks widen in JSC over push for Maraga successor