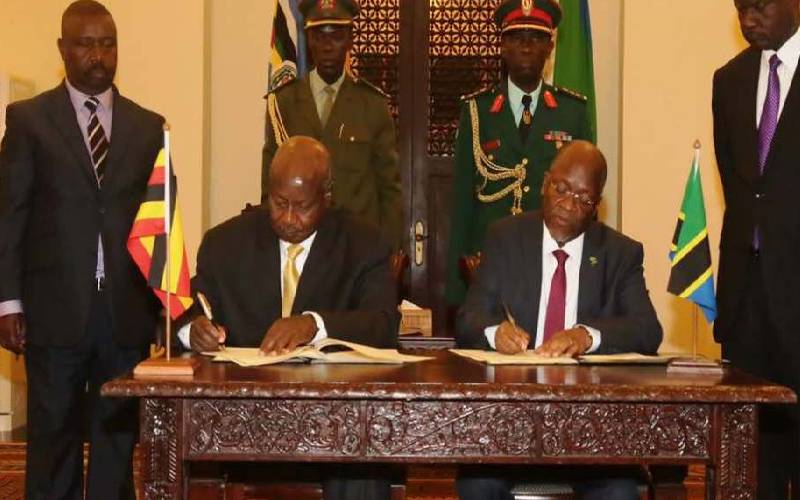 After warding off stiff competition from Kenya for years over the route of a crude oil pipeline from Uganda, Tanzania has moved closer to clinching the deal.

On Sunday, Tanzania and Uganda signed an agreement for the construction of a Sh378 billion East African Crude Oil Pipeline from Hoima in western Uganda to the port of Tanga, a move expected to breathe life into Tanzania’s Central Corridor, which has been competing with Kenya’s Northern Corridor.

Uganda had initially planned to pump its oil through Kenya, which wanted a joint facility for the product from its own fields in Turkana County.

But the signing of the agreement over the weekend at a meeting attended by Tanzania’s President John Magufuli and Uganda’s President Yoweri Museveni brings Dar es Salaam’s coup against Kenya closer to success.

Kenya – which has an estimated 560 million barrels of recoverable oil against Uganda’s 1.6 billion barrels – had eyed the infrastructure as part of its grand plan to become a “preferred regional petroleum transporter of choice”, according to official documents.

However, Magufuli, nicknamed ‘bulldozer’ for the way he rams through his policies, appears to have spoilt the party for Kenya, winning a crucial battle in the long-drawn-out war for control of the region’s oil wealth.

However, Petroleum Principal Secretary Andrew Kamau downplayed the impact of the agreement, saying it was an affair between Tanzania and Uganda.

“It has nothing to do with us. They were always going to build a pipeline,” said Kamau.

But there are those who will not give up on the country’s chances of courting Uganda back.

“I wouldn’t give up still. Until they get financing for it and they start construction, that is when you know definitely it is gone,” said Charles Wanguhu, a social activist and co-ordinator of the Kenya Civil Society Platform on Oil and Gas.

Wanguhu said a lot is likely to happen this year, particularly with the outbreak of Covid-19, which lowered demand for oil and led to its price hitting record lows.

“It is not very clear yet how Covid-19 has impacted the oil and gas sector, so even financiers of the pipeline might be difficult to come by,” he said.

Wanguhu added that the combined oil reserves for Uganda and Kenya were likely to be more attractive to a financier than Uganda’s or Kenya’s alone.

However, as part of the bigger regional war for the control and influence of the economy, experts insist that the only way for Kenya to gain a competitive edge is by finalising and operationalising the Lamu Port.

Gerishon Ikiara, an economist and former Transport PS, noted that Uganda and Tanzania have for a while not been happy with the continued dominance of the Kenyan economy in the region.

“Now they (Uganda and Tanzania) are doing all kinds of things in an effort to come up and compete effectively with Kenya,” he said, giving the example of the volume of trade where Uganda has significantly slashed its trade deficit with Kenya by inviting foreign investors who have developed industries within its borders.

He noted that for these countries, it is the competitiveness of infrastructure that will win the day, and this is where the crude oil export pipeline falls.

But it is still uncertain when a final investment decision (FID) on Kenya’s oil will be completed, which would set the stage for the commercial production of oil from Turkana’s Lokichar area.

Commercial production of oil is a precursor for the development of the Lamu Port.

Initially, it seemed as though Kenya had won over Uganda and the crude pipeline would snake its way from the oilfields in northern and western Uganda through Kenya’s oilfields in Lokichar before getting to Lamu County.

Wanguhu noted that a joint crude pipeline was the most viable option as both oil producers would enjoy economies of scale.

In April 2013, Uganda signed a deal with Tullow Oil, Total SA of France and the China National Offshore Oil Corporation to build both an oil refinery and the pipeline.

“The MoU lays out a market framework for Uganda as a future oil producer, consisting of a crude export pipeline from the Lake Albert Basin to the Kenyan coast, to be developed in parallel with a right-sized petroleum refinery and the use of petroleum for power generation. The Ugandan and Kenyan Governments have in principle agreed on joint initiatives for a crude oil pipeline,” said Tullow in its 2013 annual report.

The pipeline’s entire length will have to be heated to keep the waxy oil found in both countries in a molten state for easy evacuation.

In 2014, the two countries settled on Toyota Tsusho as the consultant for the pipeline. But then in early 2016, Uganda started having a change of heart, with presidents Museveni and Magufuli announcing plans to build a competing oil pipeline.

But the fight for the construction of the pipeline has widened the rift between Kenya and Tanzania. At some point, Energy Cabinet Secretary Charles Keter, his PS Joseph Njoroge, Kamau and Lapsset CEO Sylvester Kasuku were denied entry into Tanga Port and their passports confiscated.

Tanzanian authorities said they had not been informed of the visit by the Kenyan delegation. The Kenyan team insisted Dar es Salaam was aware of their visit and that they had gone to into the country to participate in joint talks between Uganda and Tanzania on the dispute over Uganda’s oil pipeline.