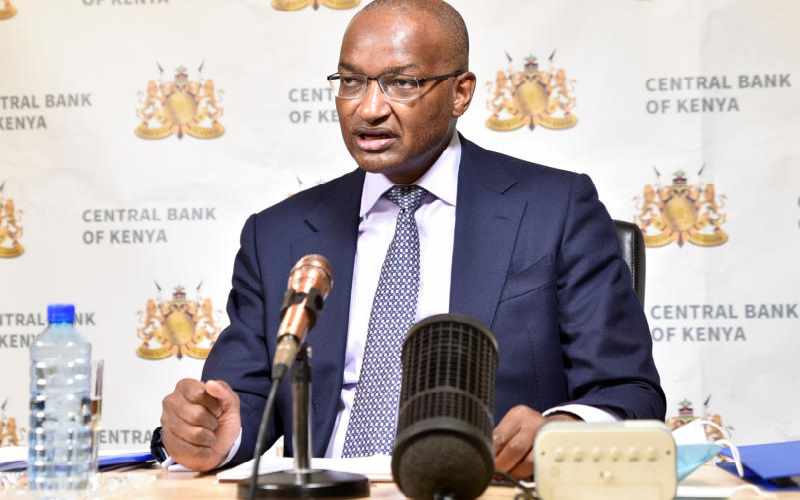 There are personalities that effortlessly attract clichés, like moths to light. One such trite-inviting personality is the soft-spoken, but firm, Central Bank of Kenya (CBK) Governor Dr Patrick Njoroge (pictured).

He might speak in a soft voice, but his conviction, like that of a religious crusader, never wavers. In the halls of the banking sector, they say it is either his way or the highway. They say he oversees the financial sector with an iron-fist.

But of all the banalities about Njoroge’s character, the most resounding is his undulating optimism. If he was to be locked up in a room with other economists, as the United Kingdom’s Prime Minister Winston Churchill would put it, a glass of water on a table, he would come out convinced the glass was half-full where others saw a glass half empty.

Amidst the torrid effects of Covid-19, a respiratory disease caused by novel coronavirus, Njoroge is buoyant that the Kenyan economy is bouncing back.

Njoroge, a man of faith who professes the teachings of Opus Dei, an institution of the Catholic church, is also an optimist. Unfortunately, his profession, economics, is a dismal science.

His armoury of optimism does not feature the ammunition of faith alone but also logic -- numbers, statistics, explanations, and facts.

In its latest global outlook, Njoroge’s former employer, the International Monetary Fund (IMF), noted that the world economy would contract by an unprecedented 4.9 per cent.

This would translate into goods and services valued at $4.243 trillion (Sh450 trillion) being wiped out from the global economy. It would take Kenya, consistently churning out products valued at Sh100 trillion every year for 45 years to get to this figure. Advanced economies such as the United States and the Eurozone are expected to take a serious knock.

But so will the emerging markets with China, Kenya’s leading bilateral partner, growing at a marginal rate of one per cent, way below the double-digit growth that the world’s second-largest economy was accustomed to. Sub-Saharan Africa, IMF found, would contract by 3.2 per cent.

World trade volume would shrink by 12 per cent. The world, noted Njoroge, is in unchartered territory.

Kenya however, Njoroge insinuated, is likely to be spared, as has always been. “There are of course certain differentiating factors for the Kenyan economy which we have generally called our sources of resilience,” Njoroge said, noting that economic activities had begun to pick up in May after the turmoil occasioned by containment measures implemented by the government in late March to stop the spread of coronavirus whose real impact was felt in April.

In developed economies, economists talk of business cycles -- some sort of mood swings for the economy. There is a period of elation in an economy when people are willing to spend, plants are fully operational and almost everyone eligible for work is occupied. This is the period of growth.

Then there is the downturn period as in 2008 when people are uptight; they would rather save their money than spend it; machines go quite, construction activities reduce and fewer people are employed. This is a period of stagnation or deflation.

Kenyan economy, noted Njoroge, does not have to always follow these gyrations.

And there are factors that tend to cushion the economy from such shocks, according to Njoroge.

First, Kenya’s economy is highly diversified. Unlike countries such as Nigeria, South Africa and Angola which rely heavily on a few commodities like oil, Kenya exports several commodities.

Moreover, Kenya does not export to only one country or region (for example, Angola exports its oil mostly to China) such that when there is a recession in those markets the local economy is affected.

A fifth of Kenya’s export, noted Njoroge, is to its East African Community peers -- though this market has lately been declining as China and India eat into them. Another 40 per cent of the trade is with the rest of Sub Saharan Africa (even this market has been declining). “We are more local or regional,” he said.

But even more critical is the fact that there is a large domestic component of gross domestic product (GDP). Most of the goods and services are not being sold outside of the country, but they are being traded within. So, it really does not matter whether or not there is a storm out there, a Kenyan is more likely to consume what is produced locally.

“This has helped maintain our projections of GDP even as the rest of the economy has sagged.”

Traffic has been building up as people go back to work and markets. But the country has lately recorded an increasing number of Covid-19 cases.

Even in the flower industry, where hundreds of thousands of people had lost jobs, orders in the first two weeks of June were at between 85 and 95 per cent of their normal levels, according to CBK.

Traders at the NSE, anticipating a rebound in the economy, have been snapping up blue-chip stocks at a bargain, helping the stock market surge.

Also, diaspora remittances picked up in May. Kenyans living and working abroad sent $258 million in May compared to $208 million in April.

There was a decline in money sent from abroad in April with the World Bank predicting that things could get worse. At first, Njoroge was worried, and at some point worried by the unemployment figures coming out of the United States.

“By all indications, the economy is bouncing back in May,” said Njoroge, noting that production of key agricultural products as well as exports, had improved.

They include, but they are not limited to, production of tea, exports and imports, electric sales, mobile transactions, shares traded at the NSE, consumption of cement, milk and sugar delivery – and they had started picking up in May. They were at their worst position in April when the country was still shocked by the horrible news of Covid-19.

The IMF, his former employer, is not as optimistic. Even if economic activities picked up in May as Njoroge avers, economic performance this year will be much worse than last year, according to the Bretton Woods institution.

Actually, it will be the first time in 20 years that Kenya will plunge into a recession, or negative economic growth, according to the IMF’s estimates.

They revised the country’s economic growth for this year to -0.3 per cent after the containment measures spilled over to the second half of this year.

Initially, the global lender had projected the Kenyan economy would expand by one per cent.

The World Bank, another Bretton Woods institution, which had projected the Kenyan economy to grow by 1.5 per cent this year, had also noted that in the worst-case-scenario where the social distancing rules continue past June, the economy would shrink by one percentage point.

Besides, the continued enforcement of strict social distancing rules including prohibiting all forms of political and social gatherings, implementing a dusk-to-dawn curfew and partially restricting the movement of people into and out of four counties of Nairobi, Mombasa, Kwale and Mandera, disruptions to regional and global trade could hamper imports of food or critical inputs such as seeds and fertiliser in countries such as Kenya, according to IMF.

“These risks are aggravated by the severe locust outbreak in East Africa (including in Ethiopia, Kenya, South Sudan, and Uganda), local droughts, and security challenges in the Sahel region,” the IMF said in its June 2020 Regional Economic Outlook for sub-Saharan Africa.

IMF reckons that even if countries in the region were to avoid new lockdowns, economic activities through trade and financial links could still be weighed down by slower global growth.

“Moreover, a persistent slowdown in international tourism could weigh on the recovery in services-dependent economies,” the IMF said.

Njoroge’s optimism that economic activities had started picking up in May also contrasts with another economic reality.

Tax-collection, a function of economic performance, slumped to a five-year low last month, as the negative effects of Covid-19 continued to hit government coffers.

Taxpayers gave the government Sh90 billion, a drop of slightly over a third compared to Sh134 billion that the taxman collected in May 2019, new data from National Treasury published in the Kenya Gazette shows.

Njoroge’s argument might still hold, given that tax-collection and GDP growth have not increased proportionately.

GDP has been growing faster than tax revenues, with the National Treasury attributing this to the expansion of the share of agriculture in the GDP matrix. Agriculture does not give the exchequer as much taxes as manufacturing, for example.

Tax-collection would not have been that bad if it were not for the fact that the government foregoes close to Sh172 billion through various tax relief measures in what is aimed at leaving businesses and households with more disposable income.

As at the end of last month, Kenya Revenue Authority had collected Sh1.33 trillion and will have to collect Sh130 billion to hit its revised target of Sh1.49 trillion by end of the current financial year today.

Only time will tell whether Njoroge’s optimism was well-grounded on economic realities.