From Ngei to Waluke: Maize is Kenya’s oldest bag of scandal 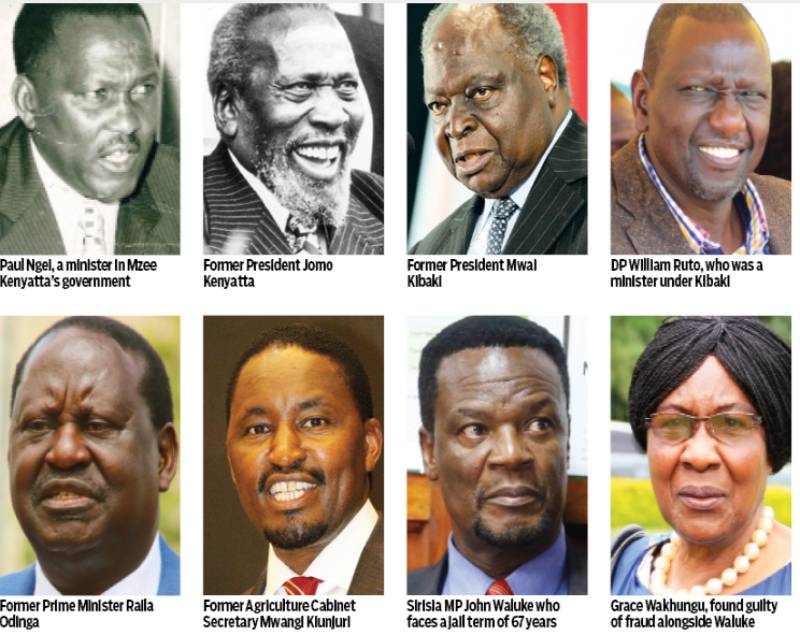 Maize, a staple food in Kenya, has provided fodder for high octane politics and felled many looking to make quick profits.

Kenya’s history is littered with politicians, business leaders, tenderpreneurs and their allies who got entangled in one maize crisis or another, and lived to regret it.

In a historic judgment in the war against graft, Thursday’s sentencing of Sirisia MP John Waluke opened a new chapter in the politics and economy of maize and its scandals, which date back to the 60s.

The allure of the staple crop is easy to see - on average, the typical Kenyan will consume 90 kilos of maize flour a year. This is far ahead of the 50 kilos of wheat or 17 kilos of rice he or she will eat in a year.

As a result, every time there is a shortage of maize and the government allows for imports to meet the millions of tonnes of demand for the crop, a scandal follows.

?The maize debate takes political undertones, especially in the maize-producing regions of the North Rift, where imports run the risk of lowering prices.

Many others have gone before Waluke, a father of four, and found themselves in the middle of a murky maize tale. Some saw an opportunity to mint millions of shillings from taxpayers, while others found themselves inadvertently caught up in the cross-hairs of a scandal.

In fact, maize is credited with one of Kenya’s earliest constitutional amendments in 1975, done to save Paul Ngei, Mzee Jomo Kenyatta’s close ally.

Back in 1966, Kenya was grappling with a biting maize shortage. To cushion silos, the country would import 250,000 bags of yellow maize, and Mzee Kenyatta had entrusted his former Kapenguria cellmate to handle the maize docket.

Ngei was then Minister for Co-operatives and Marketing, which made him the chairman of the Maize Marketing Board, a predecessor of the National Cereals and Produce Board (NCPB).

When the outcry over the maize shortage got too loud to ignore, Kenyatta formed a commission of inquiry to unearth the reasons behind it. A team chaired by Justice Chanan Singh was charged with digging up the dirt in Ngei’s ministry.

Singh’s team found the reasons behind the maize shortage partly lay outside Ngei’s doorstep - with his wife Emma. They traced a batch of ‘lost’ maize to a cereal shop in Kangundo, Emma Stores.

It also emerged that his second wife had been designated as the personal secretary to the chairman of the board. It was, however, not a crime to have a spouse onboard.

But the inquiry team concluded that “it was undesirable for wives of influential politicians and top civil servants to seek employment in their husband’s offices”.

Ngei was suspended as minister after being condemned for six months. Kenyatta, however, decided to intervene.

The president summoned the then Attorney General Charles Njonjo to State House on a Monday, and directed him to draft a constitutional amendment that Parliament would pass the following day.

Kenyatta dangled House recess to prompt MPs to pass changes that would allow him to pardon Ngei after he found himself out in the political cold.

It worked, and Constitution Amendment Act No 1 of 1975 became law. It was dubbed the Ngei Amendment, and gave the president the power to pardon a person found guilty, hence not eligible to vie or hold public office.

But maize has also split its fair share of political unions. It ended the once blissful camaraderie between former Prime Minister Raila Odinga and his then ally in the coalition government, William Ruto.

Ruto, now the deputy president, had been appointed Agriculture minister courtesy of a coalition agreement between Raila and former President Mwai Kibaki.

He was in the Raila wing of command as a member of the Orange Democratic Movement (ODM).

But then in 2009, a Sh2 billion maize subsidy scandal erupted. Raila suspended Ruto to allow for investigations, a move that further strained their relationship and hastened their fallout.

At the time, Ruto had use the Agriculture ministry to win allies across the political divide. Kibaki blocked Raila’s attempt at suspending Ruto. Waluke’s sentencing carries of echoes of the past. The MP faces the prospect of spending up to 67 years in prison for the role he and a co-accused, Grace Wakhungu, played in defrauding the NCPB.

Their company, Erad Supplies & General Contractors, won a tender to supply 40,000 metric tonnes of white maize in 2004. The company received Sh297 million without ever having supplied the maize after it forged documents.

The scandal was unearthed when Erad went after NCPB’s assets and bank accounts. Parliament sprang into action, unearthing the rot that was in the 2004 deal.

On Thursday, Anti-corruption Court Chief Magistrate Elizabeth Juma ordered Waluke and Wakhungu to pay a fine of more than Sh1 billion each, failure to which, they will be imprisoned.

After being found guilty, Waluke will lose his parliamentary seat after the magistrate ordered that her verdict be handed to National Assembly Speaker Justin Muturi.

The two, however, can appeal the ruling.

Among the star witnesses who unravelled the Erad plot was businessman Brian Yongo. Before the House’s Public Investment Committee, he said he was paid Sh7.5 million by Wakhungu for introducing her and her co-directors to a good lawyer who would pursue NCPB on their behalf.

Maize has long been a conduit for corruption. Former Naivasha MP John Mututho once admitted in Parliament that some of the food shortages in the country are artificial and targeted at having the State allow duty-free importation of the staple food.

In 2009, it was revealed that MPs had written to NCPB recommending individuals and companies that were not millers to be allocated maize.

“Maize has become a tool for corruption where few people become rich, and a tool which destabilises the whole economy and the core business of this government,” Mututho said during debate over how contaminated maize made it into the country.

And just two years ago, the then Agriculture CS Kiunjuri found himself in the eye of a Sh1.9 billion corruption storm after traders took advantage of the attractive Sh3,200 per 90kg bag of maize payout that the government offered farmers to import maize and supply it to NCPB.

He got a public scolding from President Uhuru Kenyatta, who warned him against paying out money meant for maize farmers to unscrupulous traders and well-connected individuals.

An irate president turned to his mother tongue to express his anger: “Mungiriha nimukuona,” he said (if you pay, it is at your own peril). Soon after, Kiunjuri was kicked out of the Cabinet.

Brokers colluding with officials at the grains agency is just one of the ways the maize scandal that broke out in January 2009 was orchestrated.

Several traders and NCPB officials are in court over the scam where maize allocated to the government’s strategic reserves was allocated to briefcase millers.

Some of the maize allocated to these millers was exported out to Kenya and sold for a larger profit.

To address the rot that has stalked the maize sector, two months ago, Agriculture CS Peter Munya announced that the ministry had reversed its policy of buying maize from local farmers and NCPB to curb graft at the cereals board.

Cry not as lights dim on 'Bottoms Up' club in Kisumu