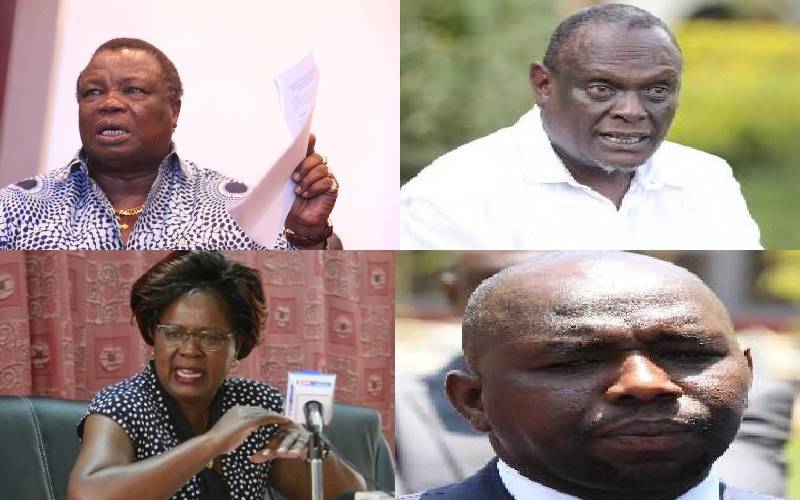 A band of less than 10 men and women are the stars of the messy and noisy divorce between President Uhuru Kenyatta and his Deputy William Ruto.

Through their tongues, acts and omissions, they catalysed a sinking political marriage between the pair that was once dubbed a “dynamic duo”.

Granted, the union described by analysts as a marriage of convenience was founded on rocks of strong suspicions and mistrust. The flashes of it flickered at the International Criminal Court (ICC) case when Ruto’s team blamed Kenyatta men of fixing him at the court.

For several years, the pair put on brave faces as their relationship hang on the cliff. And then these men and women shoved them into a free fall.

At a different level, the supporting cast of bureaucrats like Interior Principal Secretary Karanja Kibicho and parliamentarians Maina Kamanda gave meaning to the intentions.

But the DP’s side has boasted the most lethal lot armed with deadly tongues, deep pockets and enough time to go about the country rocking the very boat they were sailing on.

Below them are a supporting cast of MPs Alice Wahome, Kimani Ngunjiri, Ndindi Nyoro, Rigathi Gachagua and Oscar Sudi, among others.

Both sets of catalysts committed no crime, given they were exercising their political rights.

When Raila extended his handshake to President Kenyatta, however, the logical consequence was strife in Jubilee.

With their historical beefs -- Odinga having sacked Ruto from the Grand Coalition Cabinet, and Ruto leaving ODM in 2010 -- it was inevitable that they would be extended into the handshake politics.

Ruto had always reserved the harshest words for Odinga, and Odinga had worked flat to paint Ruto as the face of everything that was wrong in the country.

“You have a situation where individuals are moving around with sacks full of money every Sunday looking for harambees to donate to. Until there is boldness enough to face those people directly and tell them to step aside we do lifestyle audit on you, we are just scratching the surface,”Odinga said of Ruto in December last year.

His troops took over where he left, closing ranks with President Kenyatta’s ‘Kieleweke’ allied MPs to attack Ruto.

Nyeri Town MP Ngunjiri Wambugu was the face of this band, initially claiming Ruto was not assured of support of central Kenya in 2022.

“Who said we owe any debts to anyone? We do not owe anybody anything and in 2022 we will vote for whoever we want to,” Kamanda added.

In the aftermath of the handshake, Murathe who had been operating in the background, surged and began to take an active role in the party. He antagonised Ruto, so much so that he threatened a Supreme Court action to stop the DP from succeeding Kenyatta on account of the joint ticket.

In the fury of his attacks, Murathe resigned from the party only to re-emerge a year later claiming his resignation was never acted upon. His return has driven the last nail on the coffins of UhuRuto relationship.

Together with Atwoli, they have worked to rock the boat and put Ruto in his place.

“The DP will not be the next president. If I were him, I would not waste even a single cent campaigning to be president. If he had good advisors, maybe he could stand a chance,” Atwoli has stated on several occasions.

What Kenyatta’s side did, Ruto’s perfected and took to the next step. When Kenyatta/Odinga side founded the ‘Embrace’ movement to champion the handshake, Ruto’s formed the ‘Inua Mama’ brigade which turned out more lethal in attacks.

But it was their “Sky Team” exploits of Murkomen and Kithure type that defined them. Every other weekend, in churches, Ruto’s brigade was out preaching his gospel and doling out wads of cash at his behest.

On social media front, former State House Director of Diaspora Dennis Itumbi was always on standby together with his own set of digital warriors. He recruited the DP into tweeting missiles after missiles which ended up further alienating him from President Kenyatta.

And as late as yesterday, Murkomen was it again on Twitter, keeping in line with a trend where the DP’s men and women fired on all cylinders, and tweeting what the DP would have tweeted, in ordinary times:

“The 2010 Constitution did not anticipate that one man can be the president, deputy president, commander-in-chief, independent commissions, DPP, IG, DCI, chief justice, judge, magistrate, speaker senate and NA, MP, governor, governor Nairobi and Kiambu, media owner, editor for all media houses all in one.”

The Senator was among a group of DP allies ejected from leadership positions in the Senate and the National Assembly for failing to toe the president’s line. Before that, he had made it his business to contradict his own government, at every occasion.

“My conclusion from what I have seen is that we are not fighting corruption. What is happening is that we are lying to Kenyans and trying to create a narrative that is meant to show that there is an ongoing war on corruption,” Murkomen once said.

But what Murkomen could not say, Sudi easily spit it out for all. Armed with little education but a reputation for firing from the hip, he once dared the president to resign, terming him the most incompetent since independence.

Cracks in the ruling party were also expanded by what the president called early political campaigns, warning that he was preoccupied with his Big Four agenda.

In October last year, Wahome amplified the political messages from the DP’s side, adding to a chorus that had earlier been taken up by Nyoro and Kihika, among others.

Early this year, she told Uhuru to his face at Bomas of Kenya that he was presiding over a system that was harassing those who speak their minds.

She also termed Odinga a “political mercenary for hire”.

“When you occupy a public position, you should accept criticism. What is facing the DP was a pre-planned situation. I believe if they had an alternative running mate in 2017, they would have picked him,” said the Soy MP.

Fate of Duale and senators squarely in Uhuru hands