Harold fires Sue’s guard, rehires him the next day 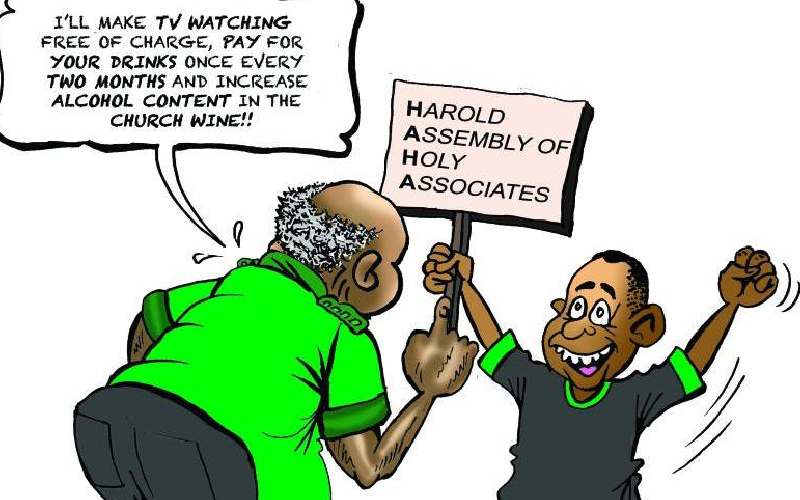 The club-wielding, snuff-smoking, wisdom-spitting, fun-loving, rumour-mongering elders of Gitegi believe, and no one can convince them otherwise, that the wisest people on earth are those that can effortlessly neuter their political nemeses and trounce them using boots of falsehood.

The season is now, and tacticians are down to work. Whoever is on Harold’s side is most likely to carry the day, and for good reason.

Harold is a political beast that mauls anyone who tries to raise serious opposition to his seat. He uses “state machinery”, including the gossip club, to intimidate, and thus destabilise, his competitors.

If you are running against Harold and you do not get weird threats, or have smelly rodents thrown at your doorstep, you are a weak candidate.

Harold’s mercantilism means that no other village dares to raise any protestation when he mistreats his political foes.

If anything, the ‘government’ spokesperson, yours truly, would consider such people hypocritical, for where have they been all this time I have suffered under this political pariah?

It was thus not surprising to hear that when Sue woke up this past Monday, something in her home was amiss.

Githendu, who was hired by Harold to be her watchman after being fired for literally sleeping on his job at the church, had been replaced with a horrible scarecrow.

Also, the little underfed dog that roams her backyard, barking at anything that moves except thieves, was missing. In its place, a scared cat sat trembling, waiting to die in the morning chill.

Soon, the news had spread through the village. In whispers, the drunkards that sat outside Sue’s pub way earlier than they should have (some had spent their night there) condemned Harold.

“Is it true? Her security has been replaced? Do they want to harm her?” they asked.

“Is Harold a dictator? Oh, he is? How come his teacher of English says he used to score zero in dictation?”

Fearing serious backlash, I had to address the masses and allay fears.

With courage bestowed upon me by a feckless, reckless and shameless autocrat Harold, I ambled to the shopping centre and pretended to be buying salt.

Someone said that Harold was adding insult to injury.

“We will beat him in the polls and wallop his clueless family members- eh, member, and then…” they saw me and immediately went mute.

I muttered something about Harold trying to reshuffle armed, or unarmed, forces in a bid to see what would work best for the village.

You know, people forget easily that Harold is being kind to offer Sue security. Harold himself does not have anyone guarding him, except an ill fed nephew who rants all the time that he is underfed and… never mind.

I am told Harold, in one of his drinking sessions in the week, was confronted by a drunk peer who demanded to know why Sue’s security had been withdrawn.

“You realise that I am the leader of the village and I do not have any security detail around me,” he answered.

“But she has a business and you do not!” the interrogator shouted.

“I have a business, but that is none of your business!”

“Then get yourself someone to protect your property and reinstate Sue’s!”

“When we talk about the church, you think we are only there to eat tithe. I am protected by the blood, and she too can rely on that.”

While Harold is not only there to eat tithe, it is one of his biggest preoccupations.

Harold was late leaving the pub that evening and some boys attacked him in the darkness. He shouted for help but Githendu, who also guarded the bar, was tucked warmly in his bed, newly jobless.

Like the political tactician he is, an injured Harold sent a delegation of one person, yours truly, to Githendu’s house the next morning to tell him that if he didn’t want to lose his job, he should go back to his job.