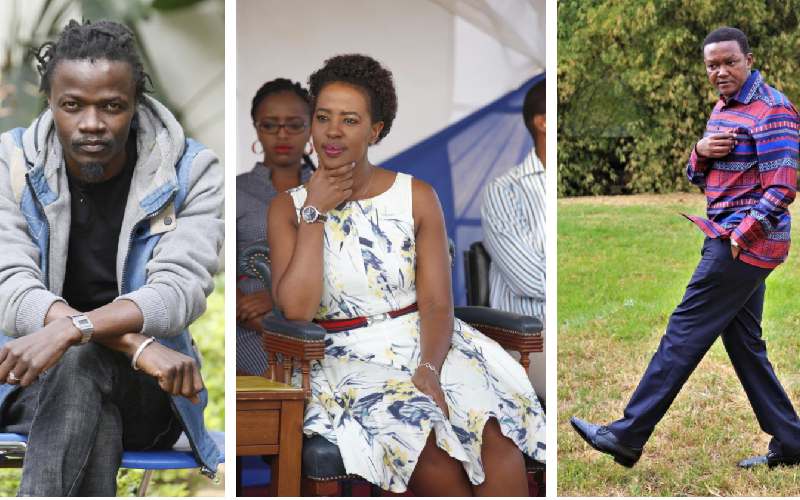 The winds of change alluded to by Machakos Governor Alfred Mutua’s former partner Lillian Nganga three weeks ago appear to have swept her off her feet into the waiting arms of rapper Julius Owino, alias Juliani.

In cross-postings of Lillian and Juliani on social media, the pair announced that they are conscientious adults who had chosen to be together, affirming speculations that they were an item.

A background to the posting was a photo of the pair holding each other.

“In this photo are two fully conscious (sic) adults who have chosen to be together. Any other narrative is false, outdated and ill intentioned. Let’s respect people’s choices,” their post on Instagram read. “Love and let love. JL”.

Woman risks losing beach plot given to her by former husband

In both accounts, they made it  clear that the message was bilaterally sanctioned.

“From Juliani and I,” Lillian wrote, and Juliani; “From Lillian and I.”

They both neutered the comments section, probably to avoid an outpouring of reactions.

The announcement came against the backdrop of an announcement by their mutual friend Boniface Mwangi, who claimed Juliani had received death threats.

Three weeks ago, Lillian announced that she had broken up with Governor Mutua two months prior.

In between that period of breakup and announcement, Lillian had celebrated her birthday “with beautiful people”, among them Juliani. On June 25, the breakup month, she posted three photos, one with Juliani, another with Mwangi and the third with another gentleman.

“My heart bursts with gratitude for I am exactly where I should be. Feliz, happy... grateful!” she wrote.

A few days earlier, on June 22, Mutua wished her a happy birthday, serenading her as “my love” and posting a photo of her, which he said was his favourite.

“This is my favourite photo of you. It was a surprise photo that I snapped as you walked out to a balcony somewhere in one of our many getaways. May God Almighty give you many more years of blessings and the joy captured in your gorgeous eyes in this photo,” Mutua tweeted.

Fast forward to August 15, when Lillian announced that the winds of change had blown her way.

“I decided to end my long term relationship with Dr Alfred Mutua. We had a good run and I am forever grateful to God he brought us together. We remain friends. With this, I put down the Machakos First Lady cap, and what an honour it has been to be of service!” she tweeted.

Quoting Roger Whittaker, she said the first time they said hello to each other, they started to say a goodbye.

Following her lead, Mutua immediately put up his own statement.

“Two months ago, we decided to slowly disengage. We are in amicable terms and remain very close as friends. We continue to talk, meet and share ideas constantly,” he tweeted.

The governor spoke of space and new directions, hailed their days as a couple and decorated her sharp insight and heart.

A few days later, Lillian showed up at Mutua’s birthday bash in Nairobi, sending everyone into a spin as to what exactly was happening.

The question on everyone’s lip after the party was whether the two were back together.

And soon thereafter, photos of Lillian flooded the internet, leading to this week’s alleged death threats, reported at Kileleshwa Police Station by Juliani.

The rapper immediately rubbished claims that he had “stolen” Mutua’s partner.

In their days, Mutua and Lillian were quite the couple, touring the county together, holidaying in exotic locations and displaying their love for all to see.

“Mutua is a charming man and very insistent,” Lillian once said,

“His persistence when convincing me that he was the right man for me won me over because he was determined to make me his wife.”

Despite frequent social media posts, however, Juliani and Lillian remained tight-lipped when reached for comment.

Both said they would speak when ready. On Friday, Lillian said she would not add a thing to what she had posted on social media account.

Mwangi, who appears to be close to the couple and privy to the goings on, also refused to give a comment.

Evelyn Ogendo: I believe there are responsible men who would wish to take care of their children

By the time he exited Kenya Air force, he was the vice of Defence forces, deputising Jeremiah Kianga who took the reins of the military in 2005.

By Jacqueline Mahugu | 9 days ago