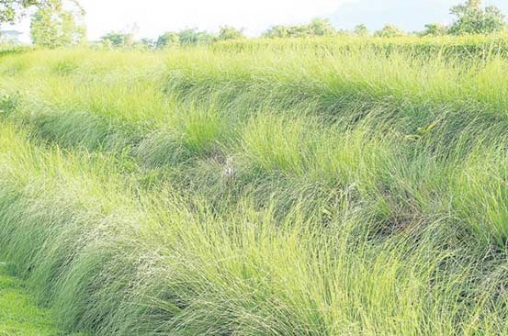 Vetiver is a tall grass with long rigid leaves and fine, fibrous roots that sink as deep as 15 feet. This magical grass is native to India where it is commonly known as Khus. Vetiver can easily pass for any other grass, but it is a magical plant with unique characteristics and intriguing benefits to farmers and manufacturers alike.

The grass is quickly gaining global adoption and is now grown in virtually all continents. It is also widely researched on and documented. Its roots are used to extract valuable oils used for aromatherapy and cosmetic purposes. The roots are also used to manufacture many organic skin care products and to extract Khus syrup, used as a flavouring agent in food.

The grass roots are also a source of livelihood for many farmers in Ethiopia who use it for weaving handcrafts and ropes.

This perennial grass is however more eminent in farms than it is in kitchens and factories. When planted in narrow trenches across the slope, vetiver forms a more stable guard against soil erosion than any other man made structure; be it the customary gabions or stone lines.

Through its closely packed stems and leaves system, the grass is able to effectively slow down the speed of running water, spread it evenly and filter out the soil particles which are heaped behind the soil hedge to form a natural terrace.

The grass can actually hold up soil deposits of up to a metre high. It therefore increases water infiltration period, causing more water to seep deeper into the soil.

This increases the moisture content of your soil, making your farm more productive. This magical, deep rooted grass is also efficient in calming down the furry of flooding waters.

It is thus widely used in flood prone areas to prevent destruction. In case your land has suffered severe soil erosion forming deep gullies or overhanging cliffs, vetiver could be good news.

It effectively controls gully erosion and stabilises the weak walls on side of the cliff, giving it enough time to heal and eventually fill up.

Another beauty about vetiver is the high tolerance to harsh conditions. It will grow well under drought conditions and is not easily intimidated by severe temperatures.

This hardy grass is also not easily destroyed by fire. Though it may burn down to ashes in a matter of seconds, it has protected clowns buried deep in the soil, which swiftly replenish the fields with great vigour and a splendid lush green.

The perennial grass has also been put on record by scientific researchers and farmers alike, as being highly tolerant to harsh Ph conditions, to saline conditions and Al-toxicity. As a result, this friendly grass can grow over an extensive region with varying climatic conditions. It can do well in virtually any part of this country. The only concern would be, like with any other plant, to supply it with enough water of about 20 litres per 100 metres each two weeks for the first ten weeks, until it is well established.

Most commercial varieties of vetiver are non-seed producing, and the few that do flower produce infertile seeds. On one side, it means more labour for you as a farmer, for the grass is not going to populate and spread on its own.

Instead, it will require you to transfer new slips (planting materials) to the new areas you want it in. But it also means you will not have to worry about the grass spreading into your farm as a weed; a phenomenon all too common with many other hedge plants such as Leuceana.

Further, vetiver is also highly accommodative and non-competitive to the adjacent crops. Farmers and researchers alike have reported friendly co-existence between vetiver and other crops planted near or around it.

In fact, crops planted near vetiver rows have shown an increase in yield, which is attributed to the improved soil moisture and fertility.

Vetiver is also highly pest and disease resistant. The commercialised vetiver varieties in the sub Saharan Africa have not been reported to harbour any pest or disease that may present a risk to crops. On the contrary, the grass is used to effectively control stem borers in maize farms by attracting the adults, which lay eggs in it. When destructive larvae are hatched, the hairy stems don’t afford them any freedom to move. They therefore drop down and starve.

This hardy grass is also a rowing source of fodder for livestock and can offer the much needed insulation from feed scarcity in drought seasons.

It however should be harvested while still young, preferably every two to three weeks, during the peak of its growing seasons.

Do not wait until the rain pours, go right ahead and enquire about vetiver grass. It may help to plant the grass a few weeks before the rains so that the root systems will be well established before the rains come.

If your farm is in an arid or semiarid place, you will need a plan of watering the young slips as you await the March rains.

For those who want to start growing it, one of the challenges they have to be aware of is that it is not easy to propagate/grow for the fiurst time.

This is because vetiver does not bear seeds. Another challenge is that being a new venture there are few certifed vetiver multipliers.

-The writer is a science -communication expert, consultant, and university lecturer

The first phase of the ongoing mass voter registration exercise by the Independent Electoral and Boundaries Commission (IEBC) has failed to reach its target despite massive voter education drives by the commission and political parties.

By Ishaq Jumbe | 51 minutes ago

By Irene Ovonji-Odida | 1 hour ago

Our hard working teachers deserve better than this
;
Feedback