By Peter Theuri | 4mos ago 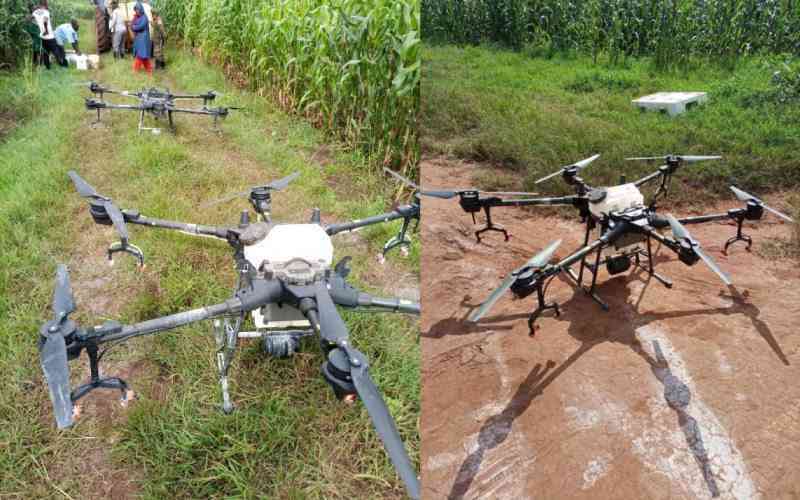 Seven German companies involved in drone technology on Wednesday showcased their innovations at a conference in Nairobi. This is as they sought to establish a footprint in Kenya and the region.

The companies are targeting expansion in Africa with the deployment of high-end, latest drones that can be used for, among others, environmental monitoring, delivery of materials (especially healthcare products), surveying, reconnaissance for military undertakings, photography and filming.

Their sustainable technologies include hydrogen batteries and other measures to ensure a carbon-neutral future for aviation.

The conference, organised by the Delegation for German Industry and  Commerce for East Africa (AHK) in cooperation with System for Business Solutions (SBS) and Agathon International, focused on unmanned aerial vehicles (UAV, which are still largely nascent in Africa.

The German delegation indicated that general public acceptance of drones in Germany had risen by seven per cent in the last three years in a country where hundreds of thousands of drones are flown. There are over 400 UAVs companies in Germany.

During the conference, questions over the high costs of training to fly drones in Kenya were discussed, with users saying it was a hindrance to their adoption. Kenya Civil Aviation Authority Director of Aviation Safety and Security Regulation Nicholas Muhoya said the costs of the training mainly benefit trainers and not KCAA.

He said Kenya needed to have a robust legislative framework in place “as we continue to adopt an innovative approach that this versatile technology is facilitated efficiently.”

According to the Civil Aviation (Regulatory Fees and Charges for Unmanned Aircraft Systems) Regulations, 2020, drone pilots could attract levies such as a Category B authorisation fee of Sh2,500 per day.

In defence of private trainers, Drone Space Ltd Chief Executive Anthony Mwangi said their fee was the average in the region, while also insisting that adding more drone schools was not a panacea to training more pilots as nine training institutions in Kenya had only trained 450 people.

2NK driver whose wife has given birth to 5 babies: 'I'm now a father of six at 28'
Rift Valley
By Kennedy Gachuhi
1 hr ago
Premium Karen Nyamu: Samidoh is a very responsible father
SCANDALS
By Benjamin Imende
1 hr ago
Easy recipe: Mozambican Peri Peri chicken
Food
By Lolita Bunde
2 hrs ago
Be careful when hiring family, friends to your business
Career Tips
By Peter Theuri
3 hrs ago
.