Thirty-six people escaped death narrowly on Monday morning when the bus they were travelling in was swept into River Kawalase in Lodwar, Turkana County.

The bus, belonging to Mwanake bus company, was swept by the river currents when the driver attempted to cross it at 8 am.

Lodwar Town Ward Administrator Shaban Lotabo who arrived at the scene to help in rescue operations said all 36 passengers who were on board were rescued.

“The members of the community with support from the Kenya Red Cross officials managed to rescue all the passengers. Only one infant who is about six months sustained serious injuries and was rushed to Lodwar County Hospital,” said Lotabo.

He cautioned the residents against crossing the river while it is flooded as he called the for the deployment of police to ensure motorists do not cross the flooded river.

“We have agreed that the bus owner will facilitate the movement of the passengers to their respective destinations,” said Lotabo. 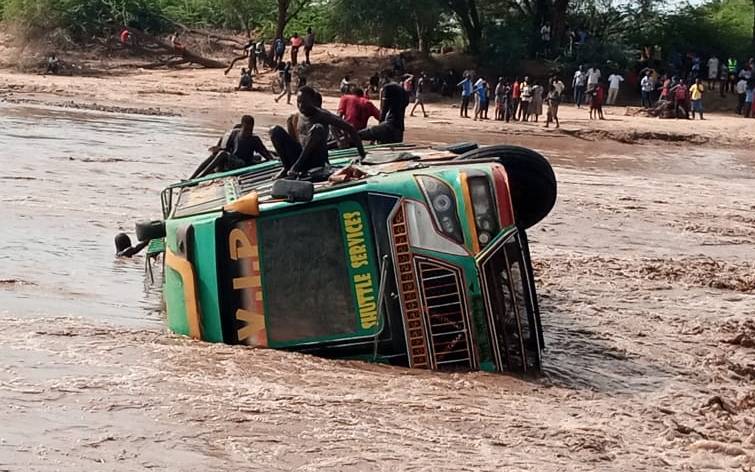 Kenya Red Cross official Rukia Abubakar commended the residents for coming to the rescue of the passengers.  He also praised the medics from Lodwar County Referral Hospital who arrived at the scene to help in recuse operations.

“We thank God we are safe, but we are requesting that anyone who lost their property they should be supported.

She said she had travelled for eye treatment and lost her new spectacles in the accident.

Previous article
China, on reports it may detain Americans, says U.S. is trying to play the victim
Next article
Explainer: How does China's digital yuan work?

Residents live in fear as cracks emerge in homes

Residents live in fear as cracks emerge in homes