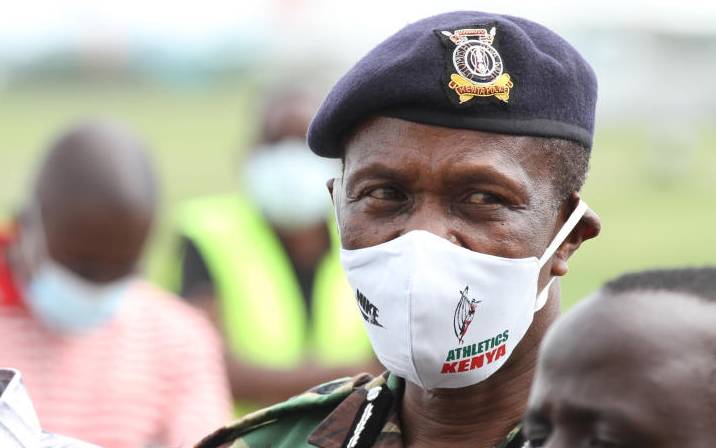 A court in Eldoret has summoned Deputy Inspector-General of Police Edward Mbugua (pictured above) to present in court a police officer charged with shooting a resident four years ago.

Resident Magistrate Barnabas Kiptoo issued a summon after the Independent Policing Oversight Authority (IPOA) told the court that the officer had failed to honour calls to appear in court to take plea.

The officer identified as Rex Okhato is alleged to have shot Charles Musima Wafula at Kapkoros, Eldoret West in Uasin Gishu County on February 9, 2016, at around 8:30 pm, occasioning him grievous harm.

While issuing the summons, Kiptoo directed the Deputy Inspector General of Police to avail himself in court to explain why the accused officer has not been able to appear in court.

“The Deputy Inspector General of police must appear before this honourable court to explain the circumstances under which the accused police officer has not been brought before this court to take a plea in regards to charges facing him,” said Kiptoo.

The Prosecution said efforts to compel the accused officer to appear in court have proved futile. The prosecution has therefore requested the court to issue summons for the officer to be presented.

While making the application, the prosecution told the court that failure by the accused officer to appear in court has delayed the justice process for the victim of the shooting.

At the time of the incident, the officer was attached at Kapkoros Police station in Eldoret West.

The case will be mentioned on August 12 to confirm whether the National Police Service will produce the officer in court to answer the charges.

By Edward Kosut | 18 hours ago