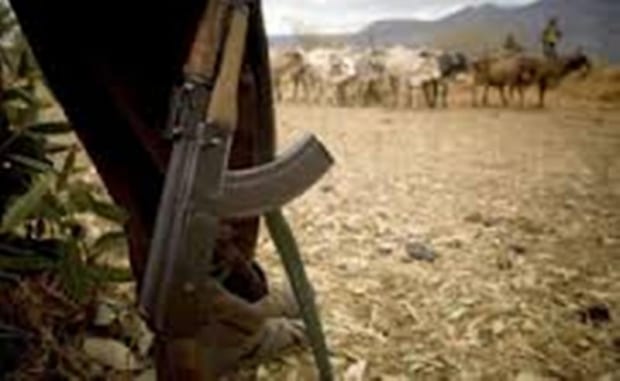 A senior police officer based in Laikipia County has been admitted at a Nakuru hospital in critical condition after he was shot by suspected bandits on Wednesday night.

Sargent Samuel Mutuku, the officer in charge of Eighteen police post was shot on the stomach during an attack at around 12 am.

Over seven suspected bandits had raided the village and made away with 70 sheep when the incident happened.

He was shot during an exchange of fire with the bandits that also led to one of the attackers being killed by the police.

According to Nyahururu sub county police commander Geofrey Mayiek, he was shot as the officers were pursuing the attackers.

“He was in the company of other police officers pursuing the bandits who had fled towards Baringo County when he was shot. He was first taken to Nyahururu County Referral Hospital before he was transferred to Mediheal Hospital in Nakuru,” he said.

He noted that one of the attackers was shot and died on the spot as his accomplices fled with the animals.

“Our officers are still on the ground pursuing them. We are yet to recover the animals,” he noted.

Following the incident, local leaders led by Githiga ward MCA Peter Thomi and his nominated counterpart Irene Wachuka have called for the increased patrols along the Baringo and Laikipia border saying cases of such attacks had resumed.

When parents and guardians hand over their children to school, they believe they are in one of the safest places children can be

By Gilbert Kimutai | 1 hour ago

By Bakari Ang’ela | 8 hours ago