Ndiritu Muriithi: What I think of Ruto and Raila

By Allan Mungai | 7mos ago

Where did President Uhuru Kenyatta and Ruto part ways?

A few years ago, he was the architect of folding political parties. Personally, having been a young person during the old Kanu days I cannot believe that after the 2010 Constitution, any leader would wish us to be basically a one-party kind of system. The whole point of the 2010 Constitution was to expand the democratic space and freedom of citizens to have different views. So why are you forcing it? And you see that behaviour even now. On that side they are not talking about coalition, only one exception has been made for Musalia Mudavadi and Moses Wetang’ula. (For) the rest of Kenya (it is) toe the line or else... No, that is the mark of dictatorship and we, as Kenyans, cannot possibly countenance that kind of push.

Mt Kenya is divided, do you worry about being on the losing side?

Mount Kenya will determine who becomes the fifth president. As a political player with a number of years of experience, there is no doubt that Mt Kenya is solidly behind Raila Odinga.

There was a perception that one of the competitors had made inroads in Central or Mount Kenya. That perception is based on what we already discussed, where did their pathways with the President cross? Instead of doing the work, all he was doing is campaigning every single day.

Remember, when you move a large group of government technocrats, CSs, PSs because, you are using the state to campaign. So you are going to launch a road, obviously, the PS for roads, minister for roads and all these other people have to come and organise that function, while they should have been working. That is where they parted ways.

Do you worry about your political survival?

The media have often portrayed me, and I accept, as a bit of a maverick. That I don’t follow the beaten path. I was elected independently in Laikipia in spite of a major onslaught by Jubilee. At that time, of course, the President and the Deputy President were together and they would come there and campaign repeatedly, yet I still won. Why? Because Kenyans respect people of character, people of integrity and people, above all, who are speaking the truth and have a proven track record.

I am running for a second term as governor of Laikipia. In fact, this time around, I’ll be wearing the PNU banner because it is a party that I was elected on before, when I was MP for Laikipia West. And of course, the party founded by President Kibaki carries a special meaning for me. Because, obviously, of kinship.

Do you feel your role in Azimio la Umoja will affect your reelection?

To he who much is given, much is expected. Obviously, it is a balance. But it’s a responsibility that I wear and I carry very happily. Just these past two and a half weeks, for example, I have been all across Laikipia and I was really touched by the overwhelming sense of support that citizens gave me.

I must have had 35 different meetings in the space of 10 days. I can tell you, I am absolutely buoyed and charged by the overwhelming support and the citizens are really happy and we feel honoured that I was appointed chair of Azimio.

Yes, from 1992 to 1997. In Kibaki’s campaigns he was running on a singular party, the Democratic Party. In 2002 and 2007, he ran as a coalition candidate. A coalition has many benefits, but also has special areas that require management, mainly sibling rivalry in an area, county or constituency. Coalition parties, maybe perhaps of equal strength and they want to compete, and therefore we have to organise it so that it is free and fair. That requires serious management to balance interests and ensure fairness. Managing coalition affairs, ensuring coalition partners are treated with respect and with fairness. Of course, coalition brings the benefit of larger numbers.

Is Raila an Azimio la Umoja or an ODM candidate?

Raila is an Azimio coalition candidate. ODM, PNU, Jubilee and all the other coalition partners at their national executive committees have pronounced themselves that Raila is their presidential candidate. Later in the month, the NDCs will take the same step.

How do you plan to handle the nominations within the coalition?

At the campaign management level, it is part of our work to ensure the nomination is managed properly. One option, of course, is joint nominations. The other is to examining party strength in respective spaces because we want to win. That opens space for negotiation. Because first, there is a lot of space many hundreds of competent leaders required in order to run government. So, that isn’t just by being a member of parliament or being a senator; it could also be by you being a CS, and so on. So it opens a negotiation and is one of the methods we will use to manage ourselves. If there were no management problems, there would be no need for managers. We are up to the task.

You and CS Peter Munya have been tussling over the running of PNU. How does that situation resolve itself?

I have never understood why you believe there is a tussle. There is no tussle. Peter, first of all, is a friend of mine. Secondly, we have both been having roles that meant we were not in direct party leadership... he was a CS and me because I was governor independently elected. So there is absolutely no tussle, and the party is growing very strongly.

When the time comes to elect a party leader, if either he or I are interested, then they will offer themselves. But right now, the party is very competent in the hands of a very competent team in the National Executive Council and also with very competent and well regarded individuals as party trustees.

What do you say to people who perceive President Uhuru Kenyatta joining Azimio as unfair?

It is actually his responsibility as the President of Kenya to ensure Kenya heads in the right direction that includes ensuring that this wheelbarrow cult and other negative ideas that are pushing us to basically right wing populism do not take root in this country.

You have seen how populism ruined the UK with Brexit. You have seen how it ruined the American economy with Trump. You have seen how it is ruining Germany now. So the truth is, it is his responsibility as the Head of State to ensure Kenya is headed in the right direction and the right direction cannot be politics of dividing Kenyans. It cannot be politics of trying to instigate a class war; that you are poor because Nderitu is rich. You cannot create jobs by threatening businesses. You cannot increase people’s incomes by making the rich poorer. That’s not how it works. You increase people’s income by creating the opportunity for them to become rich, not by destroying the rich. There is a major difference. What Azimio is about is creating opportunities for all of us to uplift our living standards. What our competitors are preaching is that you don’t have money because Kamau or Odhiambo or Kipng’etich has money. How can that be? It is populism. But all countries that have ever followed populism as their main political philosophy have ended up in civil war... and ended up in self destruction. That cannot possibly be a good path for Kenya.

What is the one thing that you can tell voters of Laikipia you did so that they can re-elect you?

Oh, can you only take one? Can you take three or four? Quality health care for all. So the Laikipia health service is one unitary service with 87 outlets doing revolutionary things never seen before in this republic like sample referral. If there is a test that cannot be done in that outlet, we don’t say go look for it; we take the sample and we go into the test to ourselves then bring you the results. If there is a medicine that may not be in that outlet because we have a network pharmacy, it is up to us to locate that medicine and bring it to you, saving thousands of Laikipian’s time and money and ensuring healthcare is of very high standard.

Why do you need another five years?

Give me another five years to build on the success of Solio Water Project that gave 2,000 households water; on the Makurian and Chumvi that for the first time in Laikipia North is giving nearly 5,000 households water. We have Kariunga, Watetu... so, give me five years to ensure we complete the water for production programme so that across Laikipia people have better access to water. Give me five years so that we can complete the smart town programme that is rapidly being implemented in all our major market centres to transform them into modern market spaces for doing business with well paved roads; that create the environment for businesses to thrive and therefore creating jobs. Give me five more years so that the economic stimulus we have now that is Sh4 billion can be Sh20 billion, and we can create 60,000 to 70,000 more jobs for the amazing people. 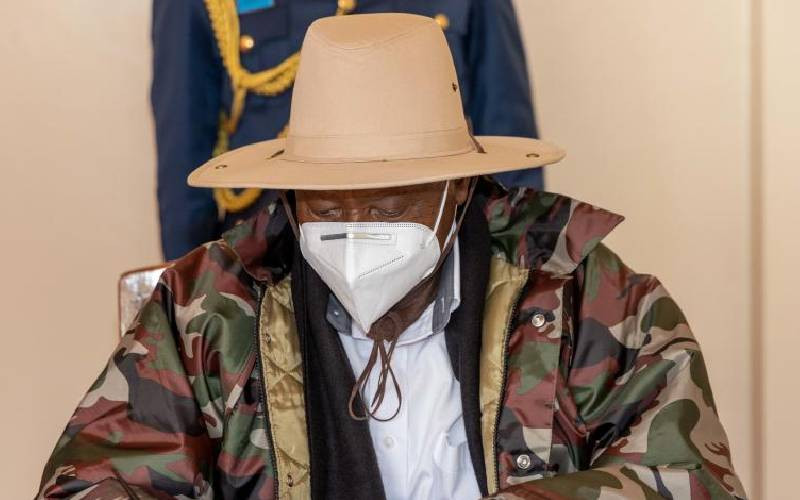 Premium Gen Muhoozi's gaffes: Suffer, the old man of Uganda with a wide hat
Opinion
By Peter Kimani
25 mins ago
Premium How MP John Waluke forged his way to jail in maize scandal
National
By Paul Ogemba
25 mins ago
200-year-old fig tree off limits to locals thanks to myths, traditions
Western
By Bernard Lusigi
25 mins ago
Premium Battle to control Parliament headed to court
Politics
By Josphat Thiong’o
25 mins ago
. 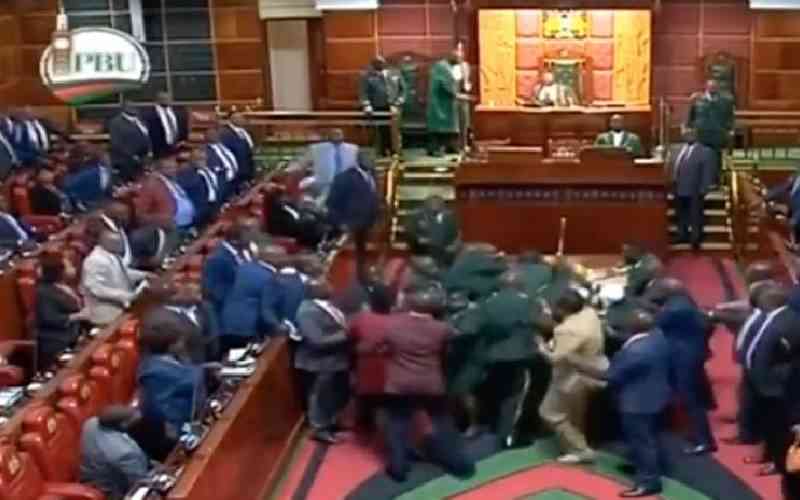 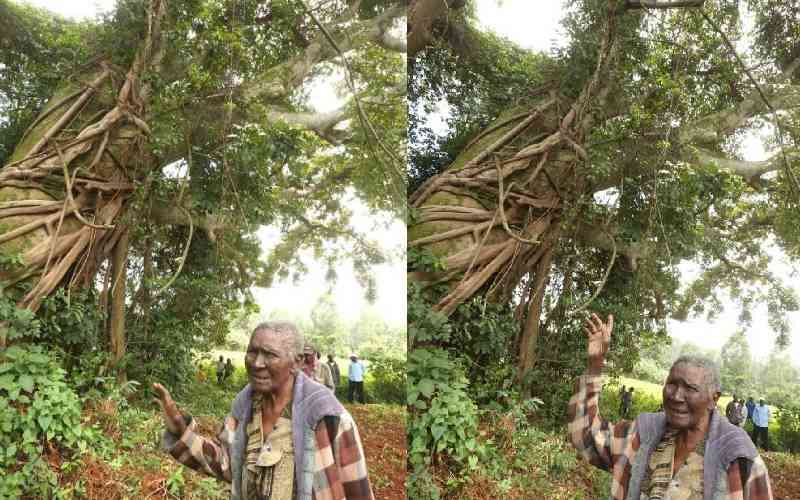 By Bernard Lusigi 25 mins ago
200-year-old fig tree off limits to locals thanks to myths, traditions