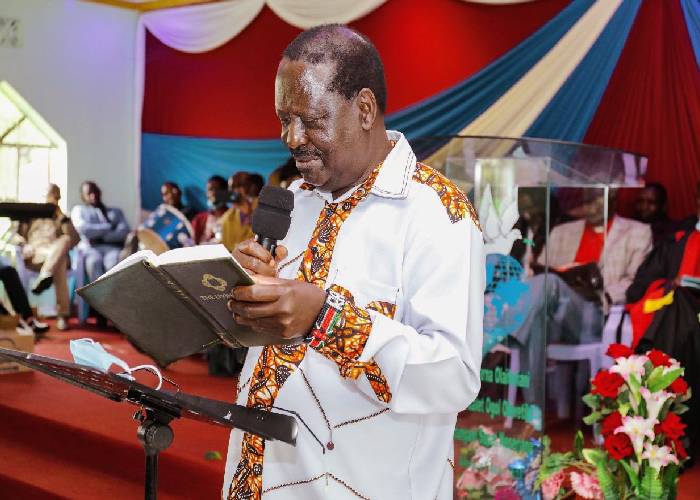 ODM has said its party leader Raila Odinga did not walk out of a church service in Butere after Anglican Church of Kenya Archbishop Jackson ole Sapit barred politicians from addressing faithful on Sunday.

ODM secretary-general Edwin Sifuna said contrary to reports from sections of the media, Raila stayed until the end of the service in Butere the consecration of Reverend Rose Okeno, as the Bishop of Butere Diocese.

Sifuna said while it is true some leaders stormed out after being told they would not be allowed to address the gathering, Raila stayed to the end.

He described the walkout as shameful and disrespectful conduct, coming at the function of the first woman Bishop of the Anglican Church was giving her maiden speech.

Sifuna claimed archbishop Ole Sapit’s pronouncement forestalled chaos that had been allegedly planned by some politicians attending the function.

“They had bought youths to cause chaos and heckle some of the leaders here before the bishop pulled the first one on them,” said Sifuna.

The ban, however, did not go down well with politicians allied to ANC leader Musalia Mudavadi who stormed out of the venue immediately.

Kakamega Senator Cleophas Malala told the archbishop to re-look into his pronouncement saying it was wrong for the church to discriminate against politicians.

“Even Jesus Christ allowed thieves and prostitutes in the church so Ole Sapit should re-look into this pronouncement,” said Malala.

Ole Sapit announced amid jeers from a section of the crowd that the Anglican Church will no longer allow political utterances to be made from its pulpit.

“I have barred the habit of politicians being given the opportunity to speak in any of our churches,” he said.

He said some politicians have in the past used the pulpit as a launching pad for insults against their opponents to the dismay of the faithful who attend the sermons for spiritual nourishment.

“The ACK is a no-go zone, for political rhetoric and whatever happens. We have also seen instances where the Church is no longer identified as a place of worship because when a sermon is given it does not get the attention, instead what is aired is the political utterances in the Church,” said Ole Sapit.

Two weeks after celebrating the International Day of the Victims of Enforced Disappearances, cases of missing people continue to be reported.

Ministry of Education has directed public secondary schools to comply with the new financial reporting rules.