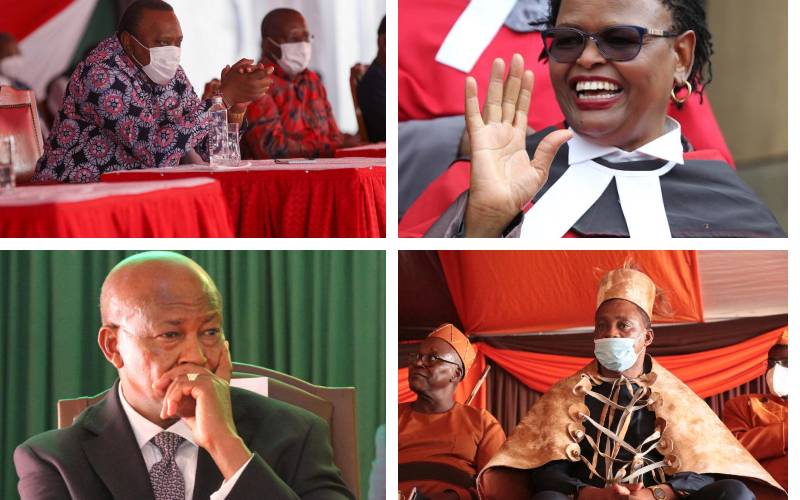 The assumption of office of Chief Justice Martha Koome has completed the triumvirate leadership of the three arms of government; the Executive, the Legislature and the Judiciary raising concerns about regional balance and the face of Kenya in running the country.

Often viewed as a taboo topic, ethnic balkanisation for political gain remains Kenya’s biggest bane. Political exclusion and subsequent marginalisation have been attributed to past election disputes and are the substratum of fragile stability.

One key requirement of the 2010 Constitution is for the President to table a report before Parliament yearly, on three issues during his State of the Nation Address is regional balance. According to Article 132 on the functions of the President, he is obligated to address a special sitting of Parliament annually.

He is required to table: “report on all the measures taken and the progress achieved in the realisation of the national values, referred to in Article 10, publish in the Gazette the details of the measures and progress made and submit a report for debate to the National Assembly on the progress made in fulfilling the international obligations of the Republic.”

The furore of having President Kenyatta, National Assembly Speaker Justin Muturi and the latest Justice Koome coming from one region as opposed to having the seats spread over the seven other regions captures according to some elected leaders, the source of Kenya's ethnic problem.

By law, Muturi, who was last week crowned as the Mt Kenya spokesperson, is third in the pecking order and would act as President in the absence of the President and the Deputy President.

From the interviews to the debate in the Senate and the National Assembly, the question of ethnic balance across the arms of government came out strongly.

“Does it bother your conscience that if you are recommended by this committee, approved by Parliament and appointed, then all the three organs of government in our great republic will be headed by persons from the same region, commonly known as the ‘mountain’?” posed Kisumu West lawmaker Olago Aluoch.

Supreme Court Justice William Ouko, during his interview for the position of Supreme Court Judge by the Judicial Service Commission (JSC), pronounced himself on the matter frankly.

“I really have no prescription, what I can say is that we are very deeply tribal even in this commission. I want to leave it at that,” said Ouko, who has been sworn in. The commission has four of its eleven members coming from Mt Kenya. They are AG Kihara, Patrick Gichohi, Macharia Njeru and Olive Mugenda.

He argued, “We cannot lie to ourselves. Ask yourself that question and you will come to the reality that there is marginalisation in this country. Security recruitment across the country, there has never been a Wanyonyi, Wafula or Walubengo as Inspector General of Police (IG).”

Said Malala: “Is it that there are certain people from certain regions that are more qualified than others. It is a shame. Let us not use BBI to hoodwink some of us to pass it and go back to the normal practice. I want to see a day when a maize farmer in Kakamega is treated the same way as a coffee or potato farmer in Kirinyaga.”

Senators Wamatangi and Ephraim Maina (Nyeri) could not let the matter fly, arguing that even Mt Kenya has suffered, including the colonial times. “Let’s not mislead this country by creating preferred or preferential treatment to some areas,” said Wamatangi.

“Of the last two months’ appointments made, I don’t know if we are going in the right direction. Every institution should reflect the face of Kenya whether Judiciary, public service or the security system. Our objective is to ensure the enabling provision call for the face of Kenya, which is fair than we have had,” said Orengo.

“The report by the Commission on Revenue Allocation (CRA) tabled in the House show a large portion of Kenya is red and a small portion is green. There is a verse in the Bible, those who have will get more, those who have little, it shall be taken. This is the true story of Kenya,” Kilonzo Jnr said.

He said there was unfair distribution, with Mt Kenya getting a lion’s share. “It's a fact that there is 2,500km of tarmac roads in Kiambu while Kakamega only has 750km of tarmac,” he said.

Wetangula said they should not let facts be swept under the carpet and urged Maina and Wamatangi not to contradict the president and purport to support him at the same time.

“Uhuru and Raila sat and acknowledge the challenge of marginalisation, unequal development, unequal opportunity in Kenya and many other historical wrongs. When we live a lie, when we live in denial, we will not solve our problems,” he said.

Wetangula said it’s a fact there are those with comparative advantage. “Cowards will always whistle in the dark hoping to scare away people. The inequality we keeping crying about is real,” he added.

President Joe Biden will meet privately with members of Floyd's family at the White House, not far from where promised police reforms.