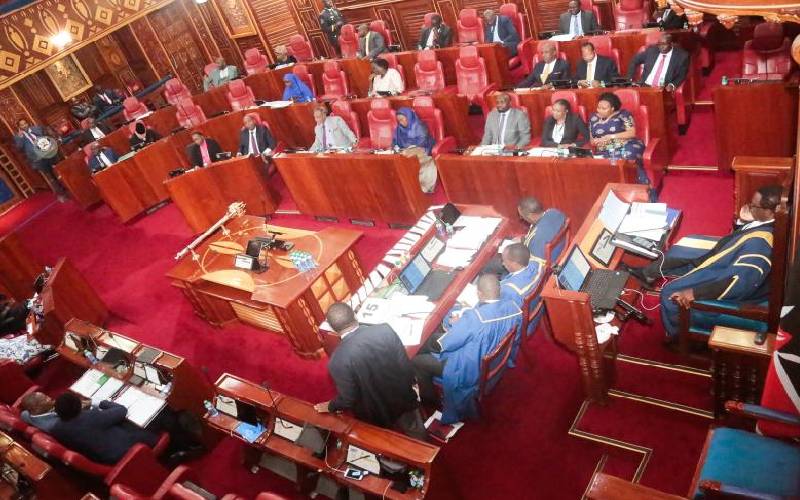 The Senate was forced to adjourn for 15 minutes during the impeachment hearing of Wajir Governor Mohamed Abdi Mohamud after he fell ill a few minutes before the debate started.

While making the request before the Senate on May 17, lead lawyer Ndegwa Njiru told the Senate that Governor Mohamud fell ill a few minutes before the debate started but was able to recover

“I spoke to him when the session began and he was slightly taken ill but was able to recover and is on his way here, we request 10 to 15 minutes,” he said.

He said Governor Mohamud will be given at least five minutes to defend himself before his legal team can wrap up the defence.

“Once he arrives, he will be allocated five minutes to defend himself before the lawyers can summarise on the same,” he said.

While contributing to the request, Elgeyo Marakwet Senator Kipchumba Murkomen said it was normal for someone to fall ill more so when faced with things like an impeachment.

“It is not surprising to find anyone to fall ill in these difficult moments, we should find the right Standing Order to find how we can adjourn,” said Murkomen.

A senate committee had earlier recommended the removal of Wajir Governor Mohamud over gross violation of the constitution.

The Nyamira Senator Okon’go Omogeni-chaired committee found that the Wajir county boss was guilty of a gross violation of the Constitution by flouting the County Government Act, Public Procurement Act and Asset Disposal Act and the Public Finance Management Act.

The committee, however, absolved the governor from abuse of office and gross misconduct charges, saying the Members of County Assembly did not provide sufficient evidence.

The final vote on his proposed impeachment by the Senate will take place this evening.

Mohamud was impeached on Tuesday, April 27, after 37 MCAs voted in favour of his ouster, while 10 opposed his removal.

The MCAs cited financial impropriety, abuse of office, gross misconduct and violation of the Constitution as grounds for his removal.

They accused the county boss of breaching Articles 235 of the Constitution, the County Government Act, and the Public Service Act by allegedly constantly reshuffling county officers

By Phares Mutembei 3 3 hours ago
Premium Uhuru Kenyatta says William Ruto failed in his duties as DP, allies fight back

By Brian Otieno 3 3 hours ago
Premium Don't cry, Bahati, that's just politics and you are not the lucky candidate

By Nathan Ochunge 3 11 hours ago
Premium Winnie Odinga: Why Martha Karua's nomination is a big win for women