Bader is my man, says Raila as he plays down election defeat

In a candid interview yesterday, Raila described his loss as "the nature of elections" where “you win some and lose some.”

He nevertheless complained of blatant voter bribery by some MPs, describing it as unethical and discouraging.

"The winner was actually an ODM member. There are a number of people who voted for him, who are ODM members because of the work he did when he was the assistant to the late Dori," he said.

Raila said people are free to interpret the win in Msambweni whichever way they want but as far as he is concerned, it was not a nationwide popularity contest for ODM.

He said that his previous statement on the importance of Msambweni to Building Bridges Initiative (BBI) was misunderstood. He said he meant to say BBI may have an uphill task in Msambweni if the Handshake candidate failed.

"I was not talking about the BBI nationally. I just said BBI would have a problem in Msambweni," he said. 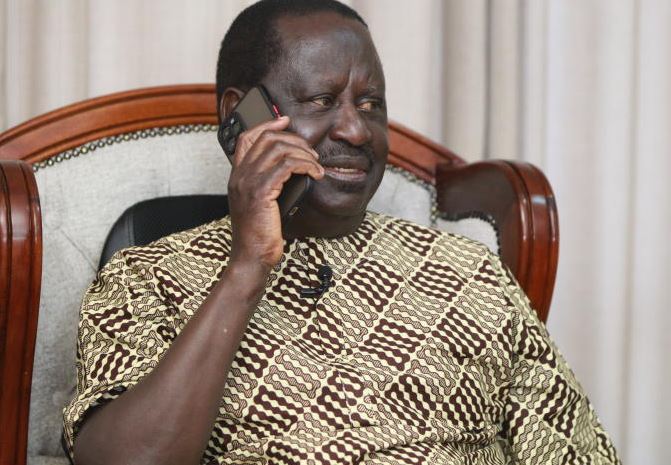 All in all, Raila (pictured) said he had come to terms with the events in Msambweni.

The only consolation for ODM was in Dabaso Ward in Kilifi North where its candidate, Dickson Karani, beat Emanuel Changawa of Movement for Growth and Development.

As Raila faced the loses, debate raged in the country over the significance of the three mini polls, especially, the Msambweni by-election, that ODM had billed as a testing ground for BBI.

Ruto had endorsed Bader on September 24, a day after Jubilee pulled out of the race.

"Democracy and people power have triumphed," said Ruto, who had been monitoring the by-election from his ranch in Taita Taveta where he has been since Monday.

Yesterday, Coast ODM leaders did not answer our calls.

In Kwale, Ukunda town woke up to roadshows as Bader celebrated his win.

Locals noted that positioning Boga as a Handshake candidate and lack of a formidable local team to counter the wave started by Kwale Governor Salim Mvurya, his deputy Fatuma Achani who comes from Msambweni sub-County, dealt a blow to ODM.

Others blamed bungled nominations exercise, lack of strategy, combative politics and failure to be in touch with local issues for the ODM defeats.

Meanwhile, in Ramisi and Kinondo wards, Bader's strongholds, voter turn out was above 40 per cent.

Yesterday, residents claimed the altercation between governors Hassan Joho (Mombasa) and Mvurya (Kwale) could have given Bader an advantage.

“Joho’s sustained attacks on governor Mvurya rubbed some of us the wrong way. We felt Joho and his candidate did not treat Mvurya with respect and this made some of us sympathise with him and Feisal,” said Mary Wambui, a voter.

He was referring to the claims by Mvurya during the campaigns that Joho was treating Kwale as a sub-county of Mombasa.

Mvurya led a local team to campaign for Bader, who was Dori's nephew and personal assistant.

The team was backed by Ruto allies who included former senators Johnostone Muthama (Machakos), Hassan Omar (Mombasa) and Boni Khalwale (Kakamega). They camped in Msambweni during the two-month campaign period to support Bader.

Joho was backed by Kwale Senator Issa Boy, Kwale Woman Representative Zuleikha Hassan and some MCAs. He sparked a war of words with Mvurya when he claimed that Boga was a government candidate.

Raila was in in Kwale for only a day last week. ODM was confident of recapturing the seat it held since 2007.

In his acceptance speech at Dr Babla Diani Secondary School after being declared winner by returning officer Yusuf Abubakar yesterday, Bader said he would focus on provision of Universal Health Care (UHC) in his first 100 days as MP.

He said he would also prioritise funding education and complete the late Dori’s projects.

He attributed his win to Ruto, Mvurya and Muthama and pledged to work with them.

“The DP has supported me in time of need and I will stand with him in 2022,” Bader said.

Kositany, the Jubilee deputy secretary general said his party leaders unilaterally decided not to field a candidate in Msambweni but they resolved to give the people a chance to choose through Bader.

Mwashetani said that were it not for vigilance, the ballot boxes could have been stuffed with fake ballots during the Tuesday poll. He claimed the police were not neutral.

“Our message is that despite a lot of hurdles, God essentially supplies a leader,” he said.

Kwale County ODM chair and former Matuga MP, who represented his party at the tallying centre, said the results of the mini poll came as a shocker to them.

Sharlet Akinyi who quit the race and joined the Boga campaign, got 18 votes.

Political analyst Hassan Mwakimako noted that while the Bader campaign penetrated the grassroots and enjoyed strong local backing, the ODM team appeared disorganised and relied on the Mombasa team led by Joho.

Boga’s campaigns slowed down for two weeks after he contracted Covid-19 that saw him admitted to a Mombasa hospital.