Chief Justice Maraga does it again

In another first, the Chief Justice handed a guilty verdict against the entire cast of Parliament for failing to carry out its constitutional mandate despite clear warnings.

The move came three years after he led the Supreme Court in annulling the 2017 presidential election, setting a precedent.

in 2019, CJ David Maraga saved MPs by dismissing a petition filed by Margaret Toili on April 10, 2019, citing a Bill which was in the House.

After Toili’s petition, six more were filed and yesterday, he finally washed his hands, leaving the MPs’ fate to President Uhuru Kenyatta.

“Let us endure pain, if we must, if only to remind ourselves that as a country and being a democracy that has chosen to be governed by the rule of law, we must say no to impunity and hold everyone accountable for the actions or omissions,” Maraga wrote.

“In the result, your Excellency, it is my constitutional duty to advise you, the President of the Republic of Kenya, which I hereby do, to dissolve Parliament in accordance with Article 261(7),” he added.

Speakers of the two Houses of Parliament were warned twice by the Attorney General that the inevitable would happen if lawmakers failed to effect the two-thirds gender rule.

In court during submissions, former AG Githu Muigai washed his hands of the matter saying he had done everything possible to ensure the law passed but the legislators shot it down.

The landmark decision by Maraga, 69, can be traced from four court orders and which Parliament failed to honour.

But a week to the deadline, MPs rushed to the House and gave themselves a grace period of one more year. They ought to have legislated the piece by August 27, 2016, but the deadline passed with nothing to show.

The first order was by Justice Mumbi Ngugi in a case filed by the Centre for Rights Education and Awareness (Creaw) in 2015. She gave the House 40 days to prepare and pass the two-thirds gender bill.

After the 2017 elections, Creaw went back to court before Justice John Mativo. This time, the Speakers Ekwe Ethuro and Justin Muturi told the court they were not to blame for lawmakers’ laxity.

It is the same argument they escalated to the Appeals Court after Justice Mativo gave Parliament 60 days and this time opened the floor for any Kenyan to file a petition to the CJ for Parliament to be dissolved.

“If Parliament fails to enact the said legislation within 60 days from the date of this order, the petitioners or any other person shall be at liberty to petition the Chief Justice to advise the President to dissolve Parliament,” Justice Mativo ordered.

In the Appeals Court, the two speakers argued the gender law is impractical and impossible to implement as Parliament has a fixed number of lawmakers. They argued that women have to marshal their own to take up elective positions so that their representation in the two Houses can increase.

“It is our humble submission that the Constitution defines a fixed number of seats in the National Assembly and the Senate and at the same time gives the citizens the right to exercise their free will when it comes to electing their representatives,” the submissions read.

“It is not possible for legislation to be enacted to give effect to the two-thirds gender rule in any other manner than that of encouraging and facilitating both genders to participate in and vie for electoral positions.”

“It is on record that Parliament has undertaken several initiatives, including publishing a constitutional amendment Bill to implement the gender principle. It is equally a matter of public notoriety that none of these amendments has ever been debated or considered by Parliament seriously,” the judges ruled in a decision read by Justice William Ouko.

They continued: “They have all been lost due to lack of quorum in the National Assembly. That, to us, does not speak of a good faith effort to implement the gender principle.”

According to him, even when he gave the speakers chance to defend themselves in a petition filed by Law Society of Kenya, Fredrick Gichanga, Toili, Stephen Owoko, John Wangai and David Sudi, they never filed submissions despite raising objections.

“Your excellency, the two-thirds gender rule is an acronym for the Constitutional imperative which prohibits any form of discrimination in the elective and appointive positions in our country on the basis of one gender… it is clearly the radical remedy Kenyans desired to incentivise the political elites to adhere to and fully operationalise the transformational agenda of the Constitution they bequeathed themselves in 2010,” the CJ added.

By Special Correspondent | 3 minutes ago

By Jacob Ngetich and Moses Nyamori | 6 hours ago 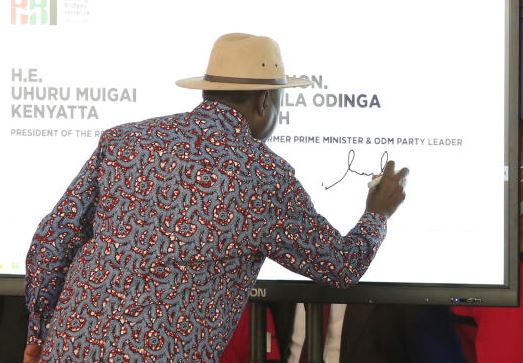