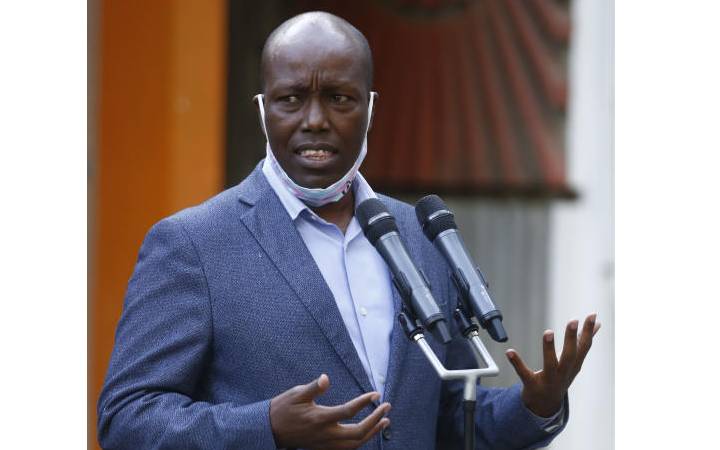 The governor’s recent presentation at a high-level meeting of political leaders from Mt Kenya region caused a stir among Dr Ruto’s allies.

The meeting that was held at Nairobi's Panafric Hotel last week brought to the fore the significance of the highly cosmopolitan county in Uhuru succession politics.

Though the details of the meeting were not made public, political pundits say it had everything to do with the consolidation of Uhuru’s political bastion.

They dismissed the explanation offered by the leaders that they met for lunch as “diversionary and mere political decoy.”

In Nakuru, politicians allied to DP Ruto say Kinyanjui’s presence at the Panafric meeting, and indeed his political engagements with Mt Kenya region, was an attempt to politically isolate Nakuru from the rest of the Rift Valley.

Political pundits argue that Kinyanjui’s political dalliance with Mt Kenya is a slap in the face for pro-Ruto allies in Nakuru County, who postulate the view that the county should stand shoulder to shoulder with other counties in the Rift Valley in their support for Ruto.

Bahati MP Kimani Ngunjiri, an influential opinion leader among the Agikuyu in Rift Valley, has faulted Kinyanjui's dalliance with Mt Kenya region, saying Nakuru’s politics should be left to play out independently.

According to Ngunjiri, any political alliances forged by the county must be within the Rift Valley region.

“We recognise that we have a considerable population of communities from Central Kenya living in Nakuru, but we should appreciate that this remains the headquarters for Rift Valley, not just a county,” said Ngunjiri.

“Whatever political plan they came up with during the meeting shall not automatically define the direction we shall take in Uhuru's succession,” he said.

Kinyanjui however says Nakuru has its own unique interests to safeguard in the country’s socio- economic and political matrix.

“In Kenya, politics is essentially local. Any meaningful impact in national power conversation must have home backing. Consequently, we shall approach the 2022 General Election from a self-interest point of view. We shall work with those who value us," he said.

He argues that the ties between Nakuru and Mt Kenya are historical.

"Historically, Nakuru has always voted with Mt Kenya region and this is not likely to change. However, we shall pitch for what belongs to us and ensure our interests as a county are honoured,” he said.

Kinyanjui’s position has been supported by Nakuru Town West MP Samuel Arama, who says the cosmopolitan nature of Nakuru puts the county in a perfect position to bargain with communities from other regions, including Mt Kenya.

Arama argues that whenever government positions are distributed, they follow the traditional voting blocks and ignore "diaspora" regions like Nakuru.

“Owing to these dynamics, the last powerful Cabinet Minster from Nakuru was Achieng' Oneko in the 1960s, although Nakuru is the fourth largest county in Kenya. This is historical injustice,” says Arama.

But Kinyanjui's critics accuse him of trying to make Nakuru part of Central Kenya. “Politically, other communities in Nakuru have been playing second fiddle to Mt Kenya for long,” says Peter Koros, who vied for the governor's seat in 2017 and lost to Kinyanjui.

Rift Valley Council of Elders chairperson Gilbert Kabage argues that putting Nakuru and Mt Kenya in one political basket in 2022 polls will be a tall order.

"Most of us have cut links with Central Kenya. Leaders from that region have always used and abused Nakuru politically. It is time for a turn-around," he said.

DP allies: It's early to celebrate

By Steve Mkawale and Titus Too

DP William Ruto ‘to stay in kitchen’ despite calls to quit