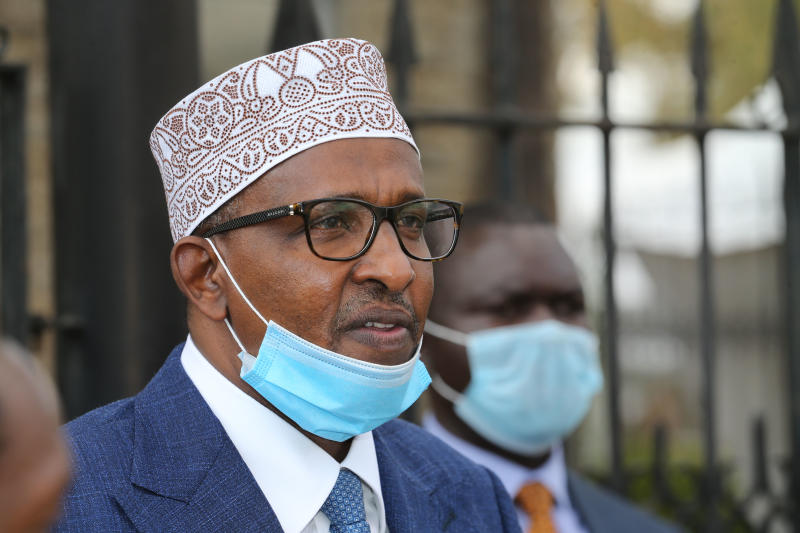 Sad news. Aden Duale (pictured) skipped Bunge this week. Of course, lawmakers rarely fancy making laws that have nothing to do with a pay rise, hence the low attendance even before the coronavirus pandemic struck.

But Mr Duale missing sessions surely deserves a spot in the pages of recent Parliamentary history, considering some of the things that make it to the Hansard.

Going by his near-perfect attendance record, his truancy wouldn’t have gone unnoticed.

Why was he absent? Could it be he is still nursing the heartbreak from his sacking almost a fortnight ago? Moving on is no joke.

From his exit speech, he didn’t look like one to sob over losses and his plea for consideration in future House debate hinted that Parliament hadn’t heard the last of his croaky voice.

But as the Swahili say, “mazoea yana taabu.” He had grown used to life on the high-table and accepting a new reality is harder than he may care to admit.

He now has no place on any table, having lost all his committee slots when the axe fell on him, freeing him from the trappings of power. But it’s anyone’s guess whether he felt shackled in the first place.

How far back he had fallen in the pecking order is evident, having been stripped of the medals he had collected in the battlefield against the opposition with his fiery tongue.

Not even this past as ‘mudslinger-in-chief’ for the ruling party could spare him an ounce of mercy. And not the intense last-minute lobbying that saw him marshal politicos from his North Eastern backyard.

For his troubles, he earned a trip back to the backbench. Even the man whose self-esteem he had once tried to clip with the infamous quip, “hii pesa si ya mama yako,” now enjoys more favour than he does.

As he will soon learn, much has changed in the backbench since he was last there. It’s a cold and lonely place.

The cramped benches of old were replaced with colossal seats which put an end to huddling and with it the cosy warmth of company. It’s lonelier with the social-distancing guidelines in place.

Power had kept him company and he thought it would be a lifetime companion. So it makes sense that he may still be grieving. It’s never easy losing a friend.

Anyone in his place would have played truant too. Imagine losing a seat you have warmed for close to a decade and worse, losing it to Amos Kimunya, a man Minority Whip Junet Mohamed thinks should be in retirement.

Perhaps the Garissa Township lawmaker thought about this prospect, and he must have growled at the ghastly sight of oldie Kimunya stealing his spotlight.

But where was he? Had he travelled back home? With the Covid-19 restrictions, such a trip promises more desolation.

And from the way his replacement and his battalion of accountants bullied many into silence, staying at home was probably the smartest choice.

Even his old buddy Junet was not in his usual spirits and he was in no mood to crack jokes.

Seven years of “playing in a league of his own”, as Duale so graciously reminded anyone who might have imagined to be their equal, had taken its toll on him – a lesson that holding on sometimes does more harm than good.

We need to use the pandemic as a turning point in our engagement with emerging and re-merging infectious diseases.

By Abdimalik Hajir | 12 hours ago

By Anthony Gitonga and Kennedy Gachuhi | 20 hours ago