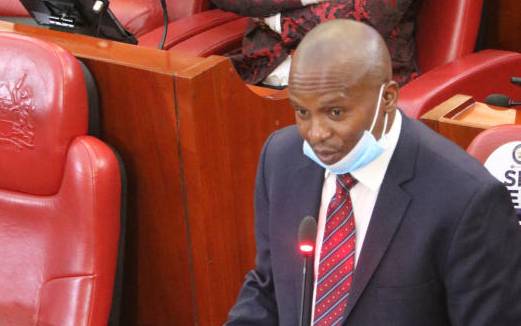 Prof Kindiki (above), who is the Tharaka-Nithi Senator, sent a short press statement to newsrooms on Wednesday evening declining nomination to a Senate committee he failed to mention.

“I have learnt through the press that the Jubilee Party has recommended me to serve in another capacity in the Senate. I respectfully decline the offer. Henceforth, I want to serve the people of Kenya as the Senator of Tharaka-Nithi County,” his statement read.

At the same time, his Nandi counterpart Samson Cherargei also sent a regret note to Senate Majority Whip Irungu Kangata declining the nomination to Powers and Privileges Committee in the Senate.

The two legislators failed to give expansive reasons for their decisions but maintained that they were focused on serving Kenyans. On Tuesday, Elgeyo Marakwet Senator Kipchumba Murkomen, who was also ousted as the Senate Majority Leader also turned down the nomination to the Devolution Committee.

This was after Murang’a Senator Irungu Kangata announced a number of changes in which Laikipia Senator John Kinyua was replaced by Murkomen.

According to Mr Murkomen, taking up the position would have been the worst betrayal to Mr Kinyua whom he said stood with him when the party kicked him out of the Majority Leader seat.

“This afternoon I learnt from the media that I have been proposed to serve in the Senate Devolution Committee in effect replacing Senator Kinyua who is being punished for standing with me. Accepting the position will be tantamount to repaying unstinting loyalty with spite and treachery,” he tweeted on Tuesday evening.

“Now and in the future, I am ready to serve the nation in any capacity and in any committee even as a mere member. What I abhor is to take up positions at the expense of colleagues who are being humiliated for no apparent reason,” he added.

Yesterday, Jubilee party leadership effected changes in the Senate committees by replacing legislators who are viewed to be rebelling against the party leadership. However, Murkomen protested the move terming it a scheme to target Jubilee leaders seen to be supporting Deputy President William Ruto.

Senator Cherargei has was also ousted from as Justice and Legal Affairs Committee chairmanship with his Meru counterpart Linturi Mithika also losing his membership at the powerful Senate County Public Accounts and Investment Committee.

John Kinyua also lost the position of chairman of the Devolution Committee in the new changes referred to as house cleaning exercise.

This comes amid warnings from the party’s Secretary-General Raphael Tuju that the purge against errand members will continue.