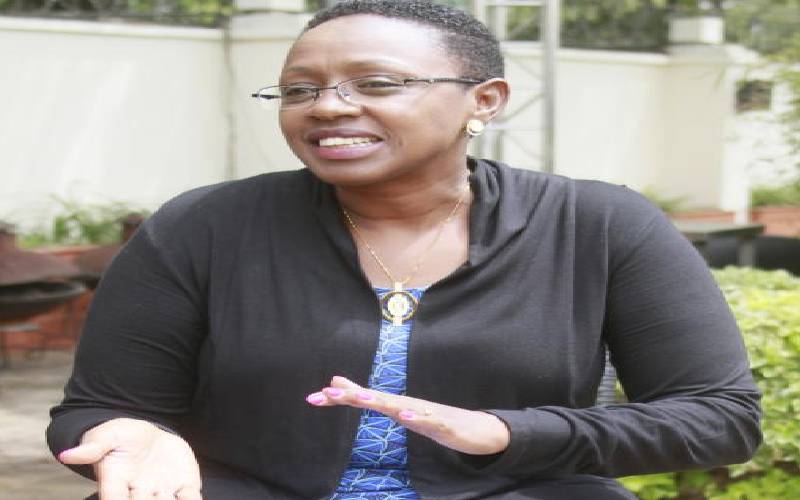 Muranga Woman Rep Sabina Chege has defended the ongoing purge in the ruling Jubilee party targeting Deputy President William Ruto's allies in both the Senate and National Assembly, saying it was long overdue.

Chege (pictured) said with all the insults, disrespect and insubordination directed at President Uhuru Kenyatta, from the DP allies, it was high time he cracked the whip.

Speaking on Tuesday night during a local TV interview, Chege said President Uhuru is only giving Tangatanga leaders what they have been calleding for.

“These leaders have been running around the country daring and insulting the President, but when he takes action, they are now crying,” she said.

She said Tangatanga leader started disobeying President Uhuru after a Parliamentary Group meeting in Naivasha early this year where they resolved to campaign against him in his Mt Kenya backyard.

“They moved around Mt Kenya region telling people how President Uhuru didn’t even campaign for himself  and that it is them who helped him, that was below the belt attack,” she said.

“Let them be sincere, even when people were being elected to these Parliamentary committees, we were called at State House,” she said.

However, Kikuyu MP Kimani Ichungwa disagreed with Chege, challenging her to tell Kenyans what Ruto has done to warrant all the persecution.

“These fights are directed DP Ruto, I am yet to know why they are so cruel with him, what has he done?” he posed.

He accused the Kieleweke leaders of hypocrisy and out to mislead the President for their selfish interest.

He wondered why Ruto was being accused of campaigning for 2022, while the same people were also running around the country de-campaigning him.

"When they run around the country badmouthing the DP, it is not early campaign, but when Ruto goes somewhere to inspect development projects, it is early campaigns, this is hypocrisy,” said the Kikuyu legislator.

When asked about the ongoing purge and what he will do when they come for him being the chair of the powerful Budget Committee in the National Assembly, Ichungwa said he is not bothered at all ,adding that he has served well and his term due to end in September.

“I don’t care if I am removed or not it does not worry, my term is ending in September with or without removal,” he said.

Ichungwa condemned the impending removal of Senate Deputy Speaker Kithure Kindiki saying the law has not been followed.

He blasted the current Jubilee Senate leadership for ignoring the Constitution and House Standing Orders to punish perceived enemies politically.

“This is an overthrow of the constitutional order in this country if discussing conducts of a senator the law must be followed with the member being given three-day notice, which has not been done,” he said.