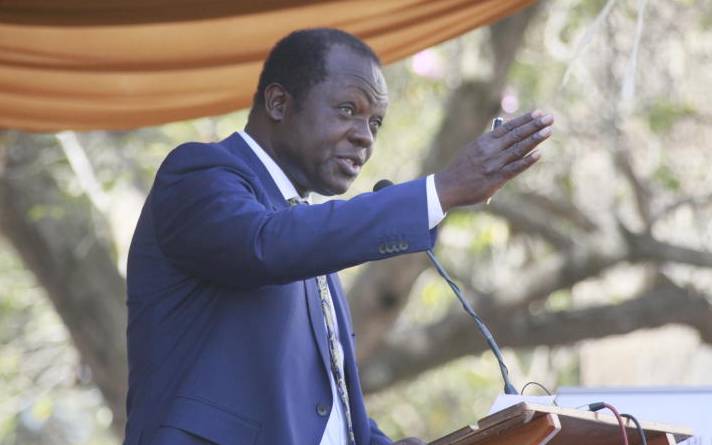 Jubilee Secretary-General Raphael Tuju (pictured)  says the party's purge on wayward senators and MPs does not target the allies of Deputy President William Ruto but is focused on disciplining rebels.

In his interview with K24 TV on Sunday night, Tuju said that the party leadership is flexing its muscle on such members to achieve a unity of purpose in its ranks.

“We have said that we will go for a recall where it is necessary to change them...and we should expect those changes,” he said.

While referring to the recent removal of Elgeyo Marakwet Senator Kipchumba Murkomen from Majority Leader position, and his Nakuru counterpart Susan Kihika from Chief Whip seat; Tuju said that move was long overdue. He said the decision sanctioned by the party leadership would have been considered in any government set up around the world.

Tuju said that President Uhuru Kenyatta is grappling with the challenge of having to address myriad problems facing the country like unemployment, trade challenges and the fight against corruption. These he said required collaboration from his party to enable him to deliver.

“We need singularity of purpose to deal with economic challenges that we are going to have to face because of Covid-19. As we go through these challenges, we expect every single hand on deck. We don’t want some people pulling us on the wrong way campaigning for 2022 instead of dealing with the multiplicity of challenges that many Kenyans are facing,” he stated.

His sentiments surface just as five nominated senators who were served with show-cause letters are expected to appear before Jubilee Party disciplinary committee chaired by lawyer Lumatete Muchai.

Three of those senators, Waqo Naomi Jillo, Mary Yiane Seneta and Christine Zawadi had written letters of apology addressed to the party leadership.

However, according to SG Tuju, those letters were insignificant as they are required to appear before the disciplinary committee which he believes will give the legislators a fair hearing. He said that the legislators ought to answer to the party leader and the National Executive Committee.

“All the information they are giving through the media is not useful I think they should keep it and go to the disciplinary committee and I think the committee is going to be very fair,” he said.

Amidst media reporters that the party leadership was now headed to the National Assembly to ouster its leaders seen to be allied to the Dp; Tuju refuted such reports.

He revealed: “We don’t want our Members of Parliament to live in fear that there is going to be a purge against them. But we expect discipline going forward because we can’t have a situation which has been prevailing to continue to prevail…” This comes after Majority Leader Aden Duale and Majority Chief Whip Ben Washiali among others were reportedly listed as next targets for removal.

Mr Tuju also defended the recent pact with Kanu which has led to massive criticism from the pro-Ruto camp. He argued that there was a pre-existing Jubilee-Kanu deal even before the 2017 General Election but it was never formalised.

“It should have been registered within 90 days when the pact was signed, but unfortunately there was an oversight, clerical error and we had to formalize it for the future,” he said.

Yesterday, the party urged the court to strike out a petition filed by Murkomen and Kihika arguing that the duo breached the protocol by bypassing party’s dispute resolution mechanism which is a required procedure.

“Under Section 40(1) of the Political Parties Act number 11 of 2011, any dispute of the nature raised in the petition herein must first be subject to the dispute resolution mechanism prescribed in the constitution of the first respondent (Jubilee),” read a court reply.

The duo had accused the party leader and the SG of signing the deal illegally saying the initiative is a reserve of the NEC.

Amidst wrangles came an assurance of DP Ruto that he would stay put in the and not consider resigning.

An anonymous source who talked to the Standard after attending a meeting between the DP and his allied MPs quoted him saying: “In war, you don’t show your enemies all the arsenal; you will lose. You must retreat and study how far they can go and strategise on how to counter… “This is just the beginning. It’s too early for them to celebrate.”

Previous article
Silencing the voice of schizophrenia
Next article
Pregnancy made me hate my husband's voice, cooking