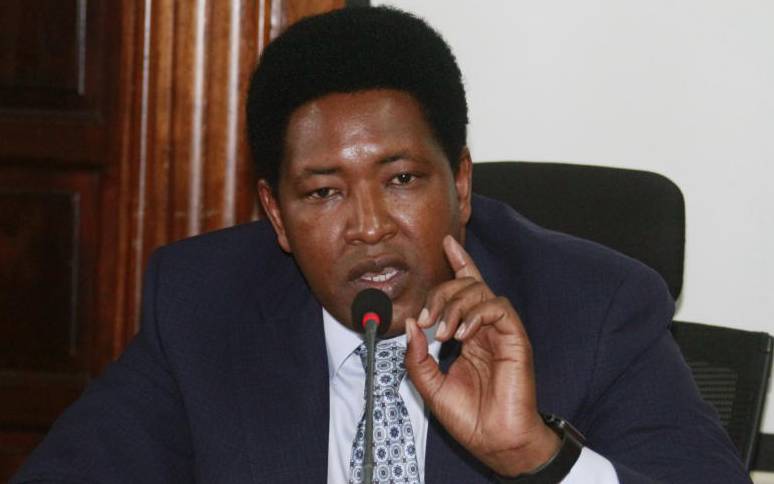 Narok Senator Ledama Olekina who is on a warpath with his party ODM says his loyalty to the political outfit is unquestionable but will not be swayed by powers that be in the party.

Speaking on K24 TV Sunday night, Olekina (above) said attempts to make changes in the Senate committees were ill-informed and would backfire. Without mentioning names, Olekina blamed his woes on ODM officials whom he said were forcing their way against all odds, hence interfering with the decisions of the Senate.

He chose his words well as he fired at his perceived political enemies for trying to ‘’carry his brain’’ to think for him by trying to arm-twist him to step down from the position of the Chairperson of Public Accounts and Investment Committee.

His fate as the CPAIC remains unknown after Senate Minority Leader James Orengo wrote a protest letter on the day he was elected as the chair of the committee. Orengo also wrote to the Speaker of the Senate Kenneth Lusaka to facilitate the process of de-whipping the Narok legislator and subsequently revoking his election as the CPAIC chair.

Speaking to KTN News on May 7, 2020, Olekina rubbished allegations that he had a sinister political deal with Jubilee’s Tanga Tanga wing which led to his proposal by Nominated Senator Millicent Omanga.

He said that he, and Kisii Senator Prof Sam Ongeri and Migori Senator Ochillo Ayacko had all expressed interests in CPAIC position. The trio met Siaya Senator James Orengo in a virtual meeting via Zoom and failed to agree on who settle on for the position.

According to Olekina, they set up another meeting on a Sunday before the election day which was slated for Monday, April 20. However, the meeting did not materialise.

“I knew we had three members who were interested in becoming chairperson.  So I campaigned, my colleagues campaigned. And the results of that election was that I got five votes and Senator Ongeri got four votes,” he said.

He claimed that hell broke loose after he won the election by garnering five votes beating Kisii legislator who had four votes. He said that Orengo called him chiding him for betraying the party. In his explanation, Ochillo stepped down on his own volition and there was no agreement that Senator Ongeri would take up the leadership of CPAIC.

“When someone who was not part of elections came to dispute that election, it really saddened me,” he stated.

When asked if he had an agreement with the Tanga Tanga wing of Jubilee, to the extent that Senator Omanga proposed him, Olekina refuted that. He revealed that Omanga may have proposed him because of his good track record at the time that he served in the committee under the leadership of Homa Bay Senator Moses Kajwang.

“I, Linturi and Wamatangi served in the past committee and they knew how capable I was in analysing reports from the Auditor General,” he told KTN News.

He lashed at claims that he met Deputy President William Ruto’s personal aide in what seems to be his calculated move to shift political allegiance to Tanga Tanga.

“I have never met Farouk Kibet. I have seen him walking and but has never met him,” he protested.

In his eyes, his tribulations are not stemming from his party only but also rested on the fact that he criticizes the Executive.

“I would say that ODM is the most democratic party in this country. For instance, when we had the PAC issue, we subjected it to a vote,” he said.

Ledama accuses party oligarchy of the wrangles bedevilling the Orange party. But disassociates his party leader, Raila Odinga, from the issues.

He once called on the ODM leader to return the favour by standing firm with his Senate committee election just like he stood with Odinga during the 2017 election.

“When he said his election was stolen, I supported him and I believed that now I have to call upon my party leader and tell him that my election is being stolen. Let me not follow suit, support me for the future of this nation,” he said in KTN News interview.

But in a subtle dig, he singled out Mr Odinga for double standards. For instance, Mr Olekina claimed that Mr Odinga once called him to stop convening a meeting to address the thorny issue of Kedong ranch because President Uhuru Kenyatta had promised to solve it but later on nothing positive came out.

He portrayed the picture of a leader who felt muzzled and caged by circumstance because according to him, he wanted to agitate the issues of his constituents but on the other hand was tied by orders by party leader.

At the time Bungoma Senator Moses Wetang’ula was being ousted as Minority Leader in the Senate, Mr Olekina told him that: “a person who owns one cow should not purport to be the owner of a cattle dip.”

But tacked in a similar fate, Olekina said that he had to call the Bungoma legislator to apologise for taking a radical position on him. Though he said that his situation this time around is different because he won by vote.

It is a course he vowed to fight for by all means. “This is a fight that I will have to fight. I’d rather be accused of having failed but I’ll never let myself be accused of not having tried. The future of this country depends on my ability to defend democracy and that is what I am prepared to do,” he told KTN News.

He warned President Uhuru against changing Senate leadership in Jubilee claiming that such an attempt will be futile.

He said: “We are trying to try things that will not able to achieve. I am yet to see how the president is going to succeed in changing the house leadership. “

Previous article
Vodacom reports 8.9 per cent jump in full-year earnings
Next article
Pregnancy made me hate my husband's voice, cooking