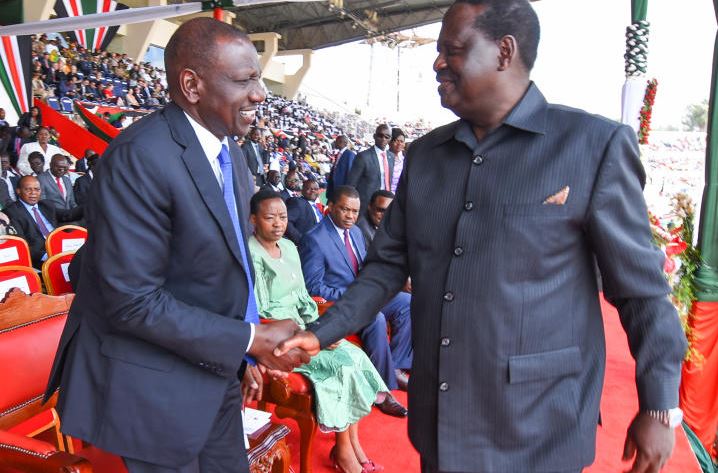 Deputy President William Ruto’s tribulations are true to the idiom, the more things change the more they remain the same.

Dr Ruto is walking a beaten path given his arch rival Raila Odinga faced similar woes during his tenure as prime minister in the grand coalition government with President Mwai Kibaki.

The DP has claimed ‘the system’ is scheming his downfall, protested about some powerful State officials undermining his authority, high ranking administrators snubbing his meetings and alleged a plot to assassinate him - all eerily familiar complaints that Raila constantly raised at the time.

Even the feeling of betrayal over the supposed deal that Ruto was to take over after President Uhuru Kenyatta serves out his two terms rekindles Raila’s protests about a dishonoured agreement to appoint him prime minister back in 2003 in the early days of President Kibaki’s Narc administration.

Although he is the country’s second-in-command, Ruto’s constant protests are increasingly portraying him as an outsider in government.

For Raila, however, the political wheel has gone full cycle. Today he wines and dines with the powers that be, his handshake with Uhuru having thrust him in the inner sanctum of power, as highlighted by delegations of Cabinet Secretaries trooping to brief him on national matters at his Capitol Hill office.

By placing Matiang’i in charge of the team that comprises all Cabinet Secretaries, Attorney General Kihara Kariuki and Head of Public Service Joseph Kinyua, it was speculated that the president had overlooked his principal assistant. It is a slight that Raila, too, had to endure between 2008 and 2012. Being the premier, his role was to supervise and co-ordinate government activities, but he was often isolated by Kibaki’s ministers.

On April 11, 2009, Raila accused PNU ministers of not cooperating with him. “(Deputy Prime Minister and Finance minister) Uhuru and some of his colleagues in PNU have refused to accept the reality that ODM is in government, that is why he can afford to be contemptuous of his boss,” Raila protested then.

Raila also appeared to be in the dark over major government decisions, at one point complaining that the government was being run casually.

“The government is being run in a jua kali (casual) manner and that is why there is wrangling and disharmony. What kind of government are we leading yet when I speak the president contradicts me,” Raila asked angrily on April 6, 2009, in response to the constant countermanding of his decisions.

On that day, Raila attacked President Kibaki for the first time after 14 months of signing a power-sharing agreement.

“Kibaki has no respect for me. Respect is a two-way traffic. We have been patient enough. We signed the National Accord to restore peace, but we are being taken for granted. From today we will go back to the people and demand reforms,” he told a public rally at Makongeni grounds in Nairobi.

The outburst came three days after President Kibaki and Raila had hosted a high profile retreat for 12 Cabinet ministers charged with streamlining the affairs of the grand coalition government at Kilaguni Serena Lodge in Tsavo, but the talks failed.

In response, Uhuru, then deputy PM, led 23 MPs to Serena Hotel where they accused Raila of refusing to meet the president at some stage. Ironically, it was at the same Serena Hotel from where MPs allied to Uhuru and Raila on Wednesday made the stinging address asking Ruto to resign.

There was temporary respite following Raila’s outburst, but the undermining resumed shortly after. Ruto, however, has avoided taking on Uhuru directly. The DP’s side of the Jubilee coalition has been calling for a Parliamentary Group meeting to iron out sticking issues in a similar way Raila declared a crisis in his power-sharing deal with Kibaki in 2010.

Ironically, this happened after Kibaki overturned a decision by Raila to sack Ruto as Agriculture minister over corruption claims. It was just one of the many instances when Kibaki countermanded the PM’s decisions, further straining relations between the two leaders.

Ruto has singled out Matiang’i, Interior Principal Secretary Karanja Kibicho and the Director of Criminal Investigations (DCI) George Kinoti as among those hell bent on stopping his quest for the presidency.

“I want to ask those officers we have employed and power brokers who are pretending to be big people to stop intimidating governors, MPs and MCAs allied to me,” Ruto said on March 8, this year, in Meru.

Earlier, during the burial of Kipyegon Kenei, the slain police officer who was attached to his office, Ruto had launched a blistering attack on the DCI, alleging he was part of the system working to malign his office.

“The DCI has been mobilised, for political reasons, to discredit and destroy my office with all manner of nonsense and to bring me down. Those in this scheme are boasting that I will not be there soon. Since the system cannot elect anybody, they can only kill,” Ruto declared.

It is a tirade that mirrors that of Raila on April 7, 2009 at Komani in Mombasa where he protested civil servants were openly disrespecting him, citing the absence of Coast Provincial Commissioner Ernest Munyi at his function, a dais adorned with a torn carpet and which lacked essential facilities like a mobile toilet.

“The Prime Minister comes to such a big government function and the PC is not here. When you ask where he is, you are told he has gone to Nairobi. If it were Kibaki coming here, would the PC not be here?  If the PC knew the president was coming…the dais would have been properly erected with all the necessary facilities,” Raila complained.

“They stole the (2007) election and now they are showing disrespect to us. I have respected the president and as an old man it feels my respect is taken for granted. Mimi silaumu Muthaura, Muthaura ni PS tu, nalaumu Kibaki mwenyewe,’’ Raila added, referring to Head of Public Service Francis Muthaura.

At the time, top officials like Muthaura and government spokesman Alfred Mutua would contradict Raila at every turn, rendering him helpless, yet he was the prime minister.

At one point, PNU released a statement saying the PM had not consulted the president “before attacking the Chief Justice and other government officials in public, but he is using the attacks to create a crisis”.

The cold war between Kibaki and Raila would at times lead to cancellation of their weekly Wednesday meetings as was the case once when State House announced Kibaki would be watching performances by finalists of drama festivals.

It has been reported that the meetings between Uhuru and Ruto, which were frequent in the first term, are becoming fewer and far between in the second term.

And Kibaki’s Vice President Kalonzo Musyoka, who was rewarded with the post for joining to stabilise PNU government during the 2007 post-election violence, was often fronted to checkmate Raila, leading to frequent squabbles over pecking order and tussling over leadership of Government Business in Parliament.

“There is no way a bronze medalist can claim a stake in Parliament where we command majority and he has less than 14 MPs. Kalonzo is a stranger and stumbling block in the reform process. He does not feature anywhere in the accord yet he wants to be in the front; that will not happen,” Raila told crowds in Kisumu town as he insisted he won gold as Kibaki won silver and Kalonzo bronze in the disputed presidential vote.

“We are ready to replace the prime minister with an equally able man or woman if his team quits. It’s not a big deal,” Kalonzo’s ally, Minister Mutula Kilonzo once remarked. Presently, Ruto’s critics insist he can be replaced as deputy president.

Whenever Raila complained, PNU attack dogs would ask him why he was grumbling yet he was the Coordinator and Supervisor of Government Business.

“If you don’t state your case where it should be stated, why do you complain to ordinary Kenyans; what will they do for you? You are complaining to them about things that are in your hands,” Minister John Michuki once told Raila.

He even wondered what the hullabaloo was all about yet the prime minister was sharing government with the president.

“If you are skinning a cat and I start on the side and another person starts from a different end, why do you quarrel about that…everybody agrees that the cat should not have skin anymore,” Michuki told Raila in April 2009.

For his troubles, then Transport minister Chirau Mwakwere promised Raila a ‘special toilet’ on his next visit.

“The PM complained that he was not provided with a toilet. Next time, we will build him his own special toilet…We can also lay down a carpet for him be it red, green or white. Kenya’s flag has got many colours so he has got a variety to choose from,” Mwakwere said.

Last April, the DP had a similar experience when he arrived at a church function in Meru to find no County Commissioner or security detail waiting for him. In the same month, Ruto was shocked when he flew to Nyeri for a fundraiser only to find no official to welcome him for the event at the African Independent Pentecostal Church of Africa in Tetu.

And for crying out about a plot to assassinate him, pro-handshake MPs have countered that as deputy president, Ruto sits in the National Security Council and that’s the forum he should raise fears about his safety. The DP’s assassination claims are eerily similar to those made by Raila’s allies at the height of the wrangles in the grand coalition government.

At a burial in Kisumu in 2012, Raila wiped a tear after then Gem MP Jakoyo Midiwo sensationally claimed there was a plot to assassinate the former PM.

“Jakom jogi dwa negi (chairman they want to kill you). You are about to die in few weeks to come…These people have finalised the plot to eliminate you. What they are now working on is how to deal with your absence and the external pressure,” said Midiwo.

Raila then declared that he was ready to die. “I’m still alive and when I die you will come to mourn me. I will die when my time comes,” Raila responded.

And as the feud in the grand coalition government escalated, PNU accused Raila of fermenting trouble to stage a ‘civilian coup’ and dared him to quit instead of stoking a crisis to deflect attention from his failures in his supervision of government business. Raila’s response was equally furious as he called for fresh election.

“We won’t quit. In fact, it is they, PNU, that should quit. To us quitting means going to the polls. I have been pushed to the wall. If it means going to elections tomorrow we are ready,” he told a crowd in Kibera.

On January 28 while touring Bahati Constituency represented by Kimani Ngunjiri – a Ruto ally who roundly criticises Uhuru - the president declared his Building Bridges Initiative campaign with Raila was unstoppable.