By Rawlings Otieno and Roselyne Obala | 2yrs ago 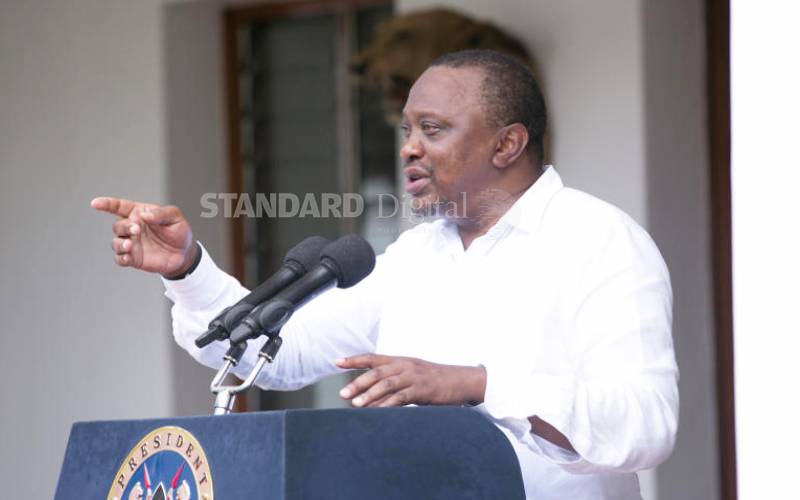 President Uhuru Kenyatta (pictured) has reiterated his commitment to the fight against graft, directing security agencies to dismantle cartels “in the public systems of budgeting, procurement, regulation and the illegal rigging of markets”.

Mr Kenyatta directed the National Intelligence Service (NIS) to undertake a rigorous review of all cartel groupings that fleece Kenyans of their hard-earned resources, including in the agriculture sector where farmers have been hit by cheap imports and poor pricing.

“All these cartels have become leeches sucking the blood and sweat of hardworking Kenyans,” he said yesterday, while directing NIS Director Philip Kimeru to take action.

“Once this review is completed, I further direct the DCI to take necessary action, working alongside the DPP, to confront these cartels with every instrument available,” Uhuru told the Directorate of Criminal Investigations (DCI) boss George Kinoti and the Director of Public Prosecutions (DPP) Noordin Haji.

The tough-talking president further took on leaders who have termed the graft purge as political persecution of those critical of his regime.

“I will not turn to the right or to the left. I will not soft-pedal or backpedal. I will make no covenants with evildoers or show mercy to those who rig our markets to enrich themselves,” he said.

He added: “We cannot be a country where those who work hard are robbed of their profit by those too lazy to invest and produce. This is why I am and will continue to fight corruption to ensure that the fruits of our labour fill every heart with thanksgiving.”

Uhuru also took a swipe at Chief Justice David Maraga-led Judiciary, terming it the missing link in the criminal justice system in taming corruption and saying he had done enough to put the corrupt on notice.

The president’s open criticism of the Judiciary, according to sources, was informed by recent separate meetings in Mombasa by Mr Haji, Mr Kinoti and Ethics and Anti-Corruption Commission boss Twalib Mbarak who registered their frustrations in the war on graft, citing numerous court orders and dragged cases.

“As we soldier on in this fight, I seek the indulgence of the Judiciary. And I do so because no administration in the history of this country has prosecuted corruption cases the way I have,” he said.

Uhuru lauded the fight against graft, noting that ministers, governors, senior government officers and procurement officers have not been spared as they have been on the front line.

“And since I respect the principle of separation of powers, I have no powers of convicting the accused. I have done my part. And I will continue to do so. Now the Judiciary should give us convictions as an indication that we are winning in this war,” he said, exonerating himself from blame. He censured the Judiciary especially on the fight against drug trafficking as he praised a New York court for jailing the Akasha brothers.

“I think it is a shame on our country that we prosecuted a case against drug traffickers and we could not get a conviction, and within a year of them being arraigned in the United States they have been jailed for no less than 25 years,” the president said.

He added: “That is something that our Judiciary must come to terms with. I must note that my fight against corruption has given me one joyous result – deterrence. Public officers are now reluctant to engage in corrupt practices because they are afraid.”

Uhuru said instead of dealing with corruption after it has happened, the fight against graft has ensured that it is fought at source.

The cases are ongoing.