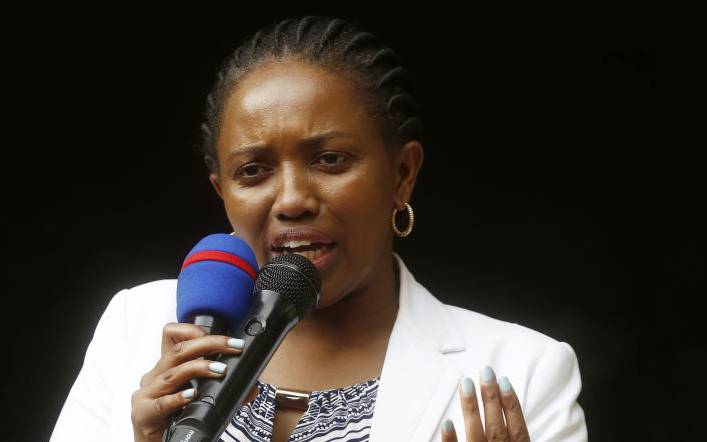 The fallout in the ruling Jubilee Party escalated in Nakuru County today after two ardent supporters of Deputy President William Ruto were locked out of a State function at the regional headquarters.

County security apparatus barred Senator Susan Kihika (pictured) and Nakuru Town East MP David Gikaria from attending a function where the  President Uhuru Kenyatta would have presented title deeds. The president was expected at the event but was in Mombasa addressing the nation where he announced a mini Cabinet reshuffle that saw key Ruto ally Mwangi Kiunjuri dropped as  Agriculture CS.

The two politicians who have openly backed Ruto’s 2022 presidential bid were stopped from accessing the venue to the event at the Rift Valley Regional Coordinators office along Moi Road.

Although it was not immediately established why they were barred, some observers are already seeing this as an escalation of the fallout in the Jubilee administration.

Gilgil MP Martha Wangari, who has been neutral on the national politics, had earlier been denied access until county commissioner Erastus Mbui came to her rescue.

On arrival at the gate, Wangari disclosed that he was with Subukia MP Kinuthia Gachobe who too had been denied access and retreated to his vehicle.

The County Commissioner after consultations allowed Mr Gachobe in before they were joined by Treasury Chief Administrative Secretary Nelson Gaichuhie.

Gikaria and Kihika who arrived later were blocked and left the venue in a huff.

They told journalists they did not know they were blocked.

"Let people know we have been blocked from attending the function. We don't know why yet," said Gikaria.

Last year in August, Senator Kihika was involved in an altercation with two presidential guards during a function to open an office block.

A clip of the two presidential guards confronting the senator went viral on social media with Nakuru residents condemning the officers for manhandling the Senator.

Ms Kihika was among local leaders who had turned up to receive Mr Kenyatta at the Nakuru County Assembly.