Mutula Kilonzo Jnr: Why the handshake has ‘confused’ Parliament

The political truce - handshake - between President Uhuru Kenyatta and Opposition leader Raila Odinga has “confused” Parliament and derailed the war on graft, according to Makueni Senator Mutula Kilonzo Jnr.

The lawmaker said the deal has seen some MPs defy party positions to move motions to censure cabinet secretaries.

Mr Kilonzo Jnr claimed critical reports highlighting graft are being shot down and criticised Wiper MPs who had been requested to move censure motions against top officials such as cabinet secretaries linked to graft, but failed to do so.

“The handshake has confused Parliament because in the previous assembly you would find members of the Opposition speaking more boldly on corruption but not now,” he said.

“Serious reports have been voted down in Parliament. If I was sitting in the National Assembly where the power to censure is, I would have moved the motion,” the legislator added.

“We have asked them to do so (move censure motion) ... the handshake has also affected Wiper where some of the members want to be associated with either Kieleweke or Tanga Tanga.”

The fiery senator was speaking on Point Blank, a political show that airs on KTN News every Wednesday night and is hosted by Tony Gachoka.

He spoke on a wide range of issues including the looming referendum, Kamba politics and his future political ambitions.

Mr Kilonzo Jnr also said that Wiper was part of the handshake deal as President Kenyatta had invited party leader Kalonzo Musyoka to State House where they discussed Wiper’s role in fighting corruption and the Building Bridges Initiative (BBI).

“We have been on the table and I was at State House. The President is also working with Wiper,” he said.

Despite defending Wiper’s role in the war on graft, the lawmaker admitted that his party had not done enough.

“I’m honest enough to say Wiper hasn’t spoken on corruption the way it should as a party on the floor of the National Assembly where committees auditing the national government are, where reports are and where the article on censure is supposed to be activated,” he said.

He added that President Kenyatta does not have to wait for officials perceived to be corrupt to be charged in order to sack them.

He added that the Legislature had let Kenyans down as it has neglected its ability to censure cabinet secretaries linked to corruption.

“As a Legislature, we’ve let Kenyans down. The section of the Constitution which says we can censure a CS doesn’t mean we wait for the president or DPP (Director of Public Prosecutions) because we have the mandate of oversight,” he said

“Some of these issues pass in the National Assembly, for example, the Ruaraka land report. The sugar report came to Senate and half of colleagues walked out,” he added.

He also complained that some committees in the National Assembly, for example, the Public Accounts Committee had grown weak.

He dismissed a political alliance between Machakos Governor Alfred Mutua and his Makueni and Kitui counterparts Kivutha Kibwana and Charity Ngilu.

“If I was worried I would say so, the alliance is absolutely insignificant. Governor Mutua and Kivutha are only looking for something to do after the general election, but they can’t unseat Kalonzo in Ukambani,” he said.

“I see Ngilu retreating from that alliance because she wants to be elected again and cannot be seen to oppose Kalonzo,” the senator added.

He urged Prof Kibwana not to run for president, saying it would tarnish his impeccable image.

“Professor you’ve done well, you’ve been awarded, carried the devolution mantra of transparency accountability well. You don’t need to soil your reputation by getting into the murky presidential elections,” he said.

On his future political ambitions, the senator hinted that he might vie for the Makueni governor’s seat come 2022 saying he enjoyed overwhelming support on the ground.

“I may or may not but if the opportunity arises, the people of Makueni enjoy my confidence. But I do not want in the process of them enjoying my confidence with me sitting in the Senate that I’m conflicted about the position. If it occurs to me that I’m the right person to lead Makueni into the promised land I will not hesitate because I’m not afraid of winning or losing because if I lose I go and practice law,” he said.

“The position of Wiper is that the legitimate process that involves everyone else is BBI. Punguza Mizigo as far as we are concerned did not involve public participation,” he said.

He, however, criticised the secrecy shrouding what BBI wants to propose that will be later turned into a referendum bill, adding that the possibility of two referendums was alive.

“It is not just anti-women, it excludes women because by scrapping the 47 seats and the nomination slots for the county assemblies you are not just discriminating you are excluding women from the decision-making table,” he said.

He added that Wiper was revising its own party nomination structures to bring in a policy of 50 per cent women representation. He said that the proposals had already been given to BBI.

“We are dealing with gender parity as opposed to giving favour. If the governor is a man, his deputy should be a woman,” said the senator.

A resident has moved to court seeking to have the county’s 2019/2020 budgeting process declared unlawful and unconstitutional. 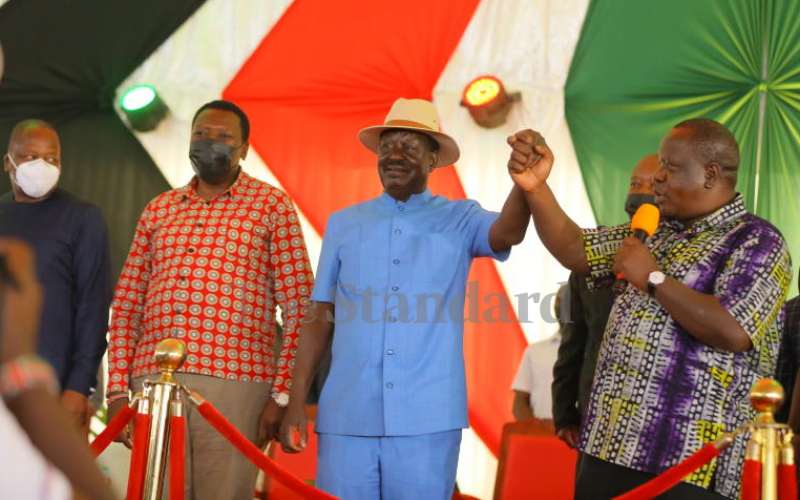 Ruto: System has no place in 2022 outcomes

The tough battle ahead for Ruto and Raila as 2022 contest beckons
;
Feedback