The National Super Alliance (NASA) has vowed to repeat the 2002 feat that ended Kanu's grip of power in this year's presidential election by ousting Jubilee from power. During its first joint rally in the South Rift region, the political backyard of Deputy President William Ruto, NASA set the stage for an intense battle during the August 8 elections.

Although a group of youth tried to disrupt the rally attended by Opposition leaders led by CORD’s Raila Odinga, Kalonzo Musyoka, Moses Wetang'ula and Amani National Congress (ANC) leader Musalia Mudavadi, it went on peacefully, with the alliance declaring war on the ruling Jubilee coalition.

The leaders, who expressed their desire to remain united and field one candidate to face off with President Uhuru Kenyatta, asked residents of the vote-rich region not to be left behind as other Kenyans rally behind NASA to form the next government.

They vowed to stick together for the remaining 183 days in a renewed bid to oust President Kenyatta and his Jubilee administration from power.

“As a united Opposition, we want to bring real and lasting change in the management of the country and we invite your leaders to join me, Kalonzo, Wetang'ula and Mudavadi in bringing that change,” he said.

Raila regretted that although the Rift Valley voted overwhelmingly for the Jubilee government, they have been short-changed going by the myriad challenges bedeviling the region.

He spoke passionately about the plight of farmers, from the dwindling tea returns to poor prices of maize and wheat and low quality fertiliser that has resulted in diseases.

“Rift Valley is the country’s grain basket, yet the locals have nothing to show for their sweat. Farmers are not happy, they are salivating while others are eating meat,” lamented Raila as he faulted the Jubilee government for disenfranchising the region’s farmers.

“Production of tea has drastically gone down. No bonus, there is only favouritism where areas deemed politically correct are charged Sh48 per kilo while the others are charged Sh26.”

Raila was quick to remind the residents that during his time as Prime Minister, a 90kg sack of maize cost Sh3,200. Now, he said, the prices are low.

“The National Cereals and Produce Board has deliberately declined to get the farmers produce saying there is no money, yet they import the same produce. The daily farmers are also facing similar frustration, especially those for processed milk,” he said.

“Why has he (President Kenyatta) written off debts of farmers from some regions ignoring the Rift? This is discrimination.”

Wetang’ula urged Rift Valley residents not to be left out of the newly formed alliance. 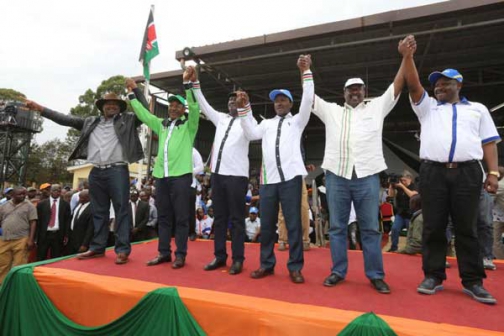 “In NASA, there is no place for tribalism, corruption and mismanagement of public resources. We want an all-inclusive government that cares for the welfare of its people, “said the Ford Kenya leader.

The Bungoma Senator also asked President Kenyatta to pull Kenya’s troops out of Somalia, saying they should instead protect the country from within.

“Sh1.6 billion spend on (CS Foreign Affairs Mohammed) Amina failed to convince even Burundi to vote with Kenya. What kind of a government is this that cannot even convince its neighbours to support its cause?" he posed.

He demanded accountability on the funds used in the mission to have Ms Amina elected as AU chairperson.

Wetang’ula asked for a thorough scrutiny of the voter register, saying the opposition wants all votes to count.

And in what appeared a strategic move to show they do not have a preferred presidential candidate, the leaders asked Wetang’ula to address the crowd first. He then invited Raila who paved the way for Kalonzo. Mudavadi crowned the day’s speeches.

Raila said they chose Bomet as the venue for NASA’s first rally to send out the message that a Tsunami was looming. “Since NASA was formed, this is the first meeting and it’s a strategic one,” he said.

Mudavadi lauded the newfound unity to oust Jubilee, urging Kenyans to make it a reality by registering as voters in large numbers.

“NASA is Kenya and Kenyans are NASA. We must registered in large numbers to win,” he said amid cheers from the crowd.

The ANC leader asked the Rift Valley not to be left behind when the alliance forms the next government.

“We are headed for victory and it will be sad if the people of Rift Valley are left out of the next government,” he said.

Kalonzo blamed the DP for his severed relationship with Rift Valley residents and vowed to rekindle it, thanking retired President Daniel Moi for nurturing the bond.

“William Ruto ruined my relationship with the people of Rift Valley. As NASA principals, we all learned from President Moi and we give him respect. It is time for things to change, Kenya must be one again,” he said.

Earlier, Kalonzo and Mudavadi held a 45-minute meeting at Aero Club in Nairobi’s Wilson Airport before they left for Bomet in the same chopper.

The meeting was however not without drama as the police had to thwart an attempt by a group of youth to disrupt the rally.

The group, which had gathered outside the stadium, started shouting pro-Jubilee slogans when Governor Ruto was invited to speak.

The new found unity among the opposition leaders has sent shock waves through the Jubilee Party circles and at the same time excited a section of the South Rift region with Governor Ruto’s CCM closely monitoring the unfolding political scenario.

UDM presidential candidate Philip Murgor was the surprise guest at the event. Mr Murgor said he was in Bomet on the invitation of Governor Ruto but did not say whether he was in support of the NASA agenda.

“I am here on the invitation of the governor and I’m happy that the unity talks are progressing well,” he said.

Ruto accused the Jubilee government of attempting to disrupt the meeting, claiming the local county commissioner was behind the youth that shouted him down.

The meeting was organised by the Kipsigis Council of Elders, who gave their blessings to the oppositions leaders. The elders, led by Chairman Joseph Kimetto, said they called the meeting to inform the leaders about the needs of their people.

Mr Kimetto spoke about the ongoing Itare Dam water project, which he claimed the Jubilee government initiated without consultation. The Italian government is funding the Sh38 billion.

The elders’ chairman claimed the government ignored their pleas to stop the water project meant to supply water to Nakuru County and its environs.

The elders said the project would impact negatively on the tea industry and drain several rivers. The case is pending at the High Court. 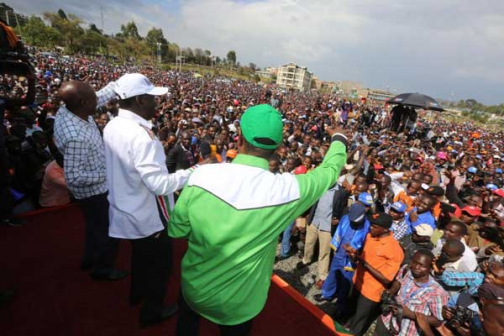 Senator Boni Khalwale Khalwale said the opposition will stand by Auditor General Edward Ouko who is being accused of irregularly awarding a Sh100 million tender for an auditing system in his office.

The Kakamega senator claimed Jubilee fears that Ouko would unearth corruption activities by government, hence the attempt by an NGO to petition his removal.

He questioned the DP Ruto's wealth, who he claimed has bought four helicopters worth over Sh1 billion.