I am in CORD to stay, but I need your support, says Wetang’ula 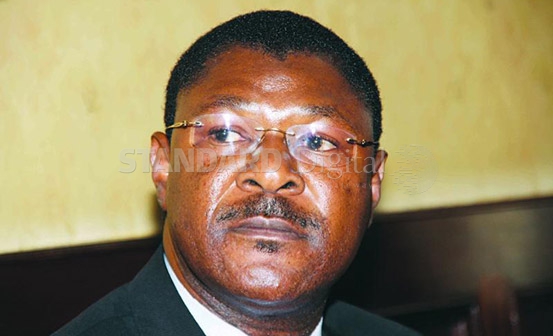 Bungoma Senator Moses Wetangula has declared he will not leave the Coalition for Reforms and Democracy (CORD).

The senator also said nothing will stop him from achieving his presidential ambition, and urged Luhyas to register as voters in big numbers. Speaking at Kitale’s Posta grounds, Mr Wetang’ula described his trial by the Independent Electoral and Boundaries Commission (IEBC) as the biggest political test, adding those out to sabotage his ambitions are fighting hot air.

Before the IEBC cleared Wetang’ula of any electoral offences, his supporters in Trans-Nzoia County held prayer meeting at the same grounds. The senator returned to the same venue to thank those who rallied behind him and vowed to stick with CORD despite calls from some Luhya leaders to abandon opposition leader Raila Odinga.

He said the ruling in his favour has strengthened his political career, saying: “I have come back here to thank you and other Kenyans who prayed for me. God answered the prayers and eventually I was given a clean bill,” said Wetangula.

He faulted those urging him to quit CORD on grounds he will not secure the coalition’s presidential ticket, arguing that he will not win the presidency by banking only on Luhya vote.

“It is unwise for leaders to ask me quit CORD so that they can support me for the presidency,” he said. Wetang’ula said he is optimistic that he will carry the day during CORD’s presidential nomination, and asked his co-principals Raila Odinga and Kalonzo Musyoka to support him if he emerges victorious. “I am set to clinch the CORD presidential ticket and I am sure my brothers Raila and Musyoka will back me to face President Uhuru Kenyatta. I am ready to finish the political journey that was abandoned by our fallen brothers Masinde Muliro, Kijana Wamalwa and George Kapten,” Wetang’ula said amid cheering from the huge crowd.

The senator had earlier on held a six-hour long meeting with aspirants seeking the party ticket in 2017 at Kitale Members Club, where he allayed fears that there was a scheme to give direct nomination to some aspirants.

He assured aspirants of fair and free nominations, and dismissed claims that some candidates will be given direct nomination.

“Get it from me that nobody will be given direct nomination. The nomination remains in the hands of the party members,” he said.

Mushrooms nearly gave me ulcers, but I finally nailed it

There is a wrong perception that mushroom farming is a walk in the park. You start today and reap the rewards tomorrow.

By Mireri Junior and Timothy Kariuki | 11 hours ago