How farmer is beating the dry spell to thrive

Drought offers one of the biggest headaches to a farmer because it means no water for crops. But one farmer has found a way to beat that problem.

Tobias Oula from Rodi Kopany, Homa Bay County uses polythene mulching on his farm. Mulching is putting a layer of material (for instance, a polythene) to the surface of an area of soil to conserve moisture, improve the fertility and health of the soil.

Though he got stares when he started, he has proven everyone wrong. He grows fresh vegetables throughout the year despite the persistent dry weathers.

A visit to his farm by the Smart Harvest confirms it all. Oula makes Sh6,000 a week, which translates to around Sh72,000 in three months in his half acre farm by selling kales only.

“I borrowed the idea of polythene mulching from a friend who works with Healing Hands International to promote kitchen gardening. I also attended seminars on the same,” says Oula.

To start off, he invested in rolls of polythene bags, water tanks and a piping system that runs through the farm. He also dug a well for the farm. During the rainy seasons, he traps the rain water for future use in his tanks.

One of his employees, Walter Gogo, explains how they run the farm despite the many water challenges. “We have plenty of water here during rainy seasons compared to other areas. All you need is a way to harvest that rain water,” says Gogo.

Apart from the financial gain, the farm is used for demonstrations to the locals.

After marvelling at what he is doing, many farmers have adopted the mulching technology.

“Our goal is to prove to locals that it is possible to grow your own fresh and healthy crops despite the harsh weather,” says Gogo.

Polythene mulching is used together with in-row drip irrigation. It involves raised bed system together with drip water irrigation in an open field. The rows in his farm are 15 metres long and contain a maximum of 80 to 100 plant holes.

“Through this system, each plant is given proper attention. One row can feed up to five families in a year. We want to be able to grow, process and preserve enough food for domestic and nutritional use and meet market demand.

First, it suppresses most weeds effectively, thereby reducing labour and other costs for weed control.

It also improves the growing conditions for the crop; the process allows retention of moisture for the plant by decreasing evaporation.

When water runs through the mulch, there is maximum utilisation of the fertiliser.

He uses the white polythene bag because it is able to reflect light hence a lot of heat does not hit the land.

It improves the soil structure by reducing erosion and also decreases the impact of heavy rainfall and allows water to slowly infiltrate the soil.

Thanks to mulching, a farmer can harvest their crop two weeks earlier when they are ripe and ready.

The process also leads to mass production of a carbon dioxide, a gas that is important in photosynthesis.

The most economical and widely used synthetic mulches are plain or embossed black polyethylene films, which come in various widths (for instance, 4 feet), thickness (0.8–1.25 mil) and length of up to 2,500 feet or more.

Usually, the mulch is applied by stretching the plastic evenly over raised beds and anchoring the edges of the mulch with soil.

This system is great during the early planting of onion, lettuce and other cool-season crops.

Drip lines are then installed under the film below the soil surface to deliver moisture and nutrients such as liquid organic fertiliser directly to the crop.

Rosy as everything may sound, Oula confesses that he has had his fair share of challenges.

His scale of production is still low and at times pricing his produce to cater for less privileged villagers is a problem.

As much as he has heavily invested in water tanks and a well, during dry weather season like now, the whole village depends on his water source for survival.

That said he has great plans for the future.

“My target is to set up demonstration units in places such as schools to enlighten the upcoming young generation and surrounding communities,” says Oula. 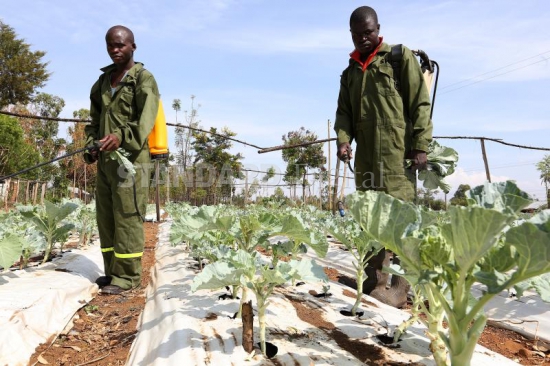