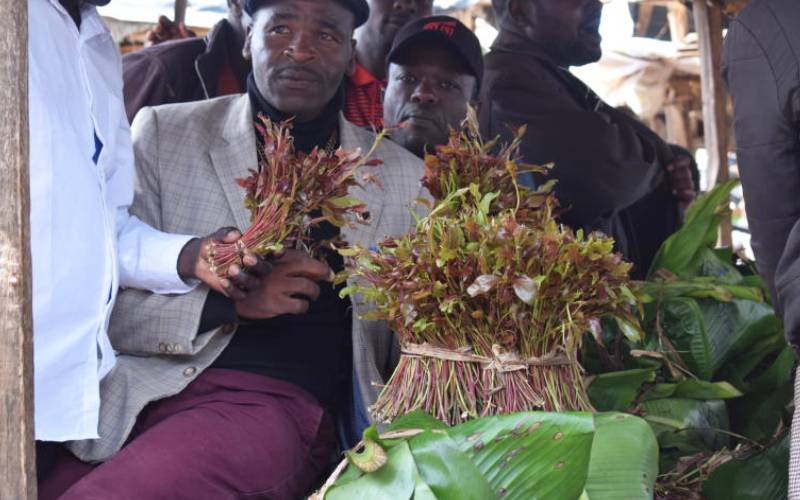 Four northern Kenya counties have banned the sale of miraa in the wake of coronavirus pandemic. In Marsabit, Deputy Governor Solomon Gobo ordered for the immediate ban of miraa from Meru, Embu and southern Ethiopia. Mr Gobu, who was accompanied by Health executive Jama Wolde and County Secretary Joseph Guyo did not, however, explain whether the region’s miraa grown in Saku is exempted. The officials also directed that livestock market days, usually on Saturdays, would be suspended indefinitely.

Dr Wolde said 20 isolation beds had been set aside while Moyale has 10 and Laisamis and North Horr five each as measures to fight COVID-19 are stepped up. The county government has also sent public health officers to the border town of Moyale to screen visitors from Ethiopia. Yesterday, information from the border town remained unclear following Monday’s move by Ethiopian Prime Minister to close the country’s border with all her neighbours including Kenya. County Commissioner Evans Achoki could not be immediately reached, but security sources revealed transporters of export goods between Nairobi and Addis Ababa would be exempted from reparations of the move. The Addis Ababa move will also see Suftu town being closed, a trading centre bordering Mandera.Mandera Governor Ali Roba had been reported asking residents to restrict their cross border activities.

Bula Hawa, the other centre bordering Mandera is in Somalia where rival militia fight with rag tag government army that spilled into Kenya. On miraa, there was heavy resistance from traders in Mandera and Wajir and exporters of the stimulant to Somalia. The traders to Somalia are reportedly using cut-line routes to dodge police and county enforcement officers while local traders stoned those who attempted to confiscate their goods. In Isiolo, Governor Mohammed Kuti last week advised miraa sellers and chewers to wash the twigs with hot water before consumption. However, yesterday, following directive of the public health department, police and county enforcement officers were all over the town to monitor who will breach the order.

Before yesterday, youth groups had placed hot water and detergents along key streets to help both sellers and chewers to sanitise their hands and wash the miraa. Isiolo has called on Imams and priests not to hold prayer gatherings.