By Paul Ogemba | 7mos ago

Anxiety is growing as Kenyans await the Supreme Court ruling on the Building Bridges Initiative (BBI). It is almost a month since the seven judges concluded hearings of the contested constitutional amendment process. However, no one knows the day, the hour or the time they will deliver their decision.

The judges have kept the D-Day close to their chest and only told the parties at the end of the three-day hearings that they will notify the public when they are ready.

Despite the secrecy of the judgement day, the issues the apex court is expected to pronounce itself on are not secret. They singled the seven contentious issues for determination, and which could make or break the push to amend the Constitution.

“Having gone through the appeals and the responses, the court is of the considered view that the seven issues are what form the basis of the BBI appeals dispute and which we will determined based on the parties’ submissions,” said the judges.

They are the issues which will thrust Chief Justice Martha Koome, her deputy Philomena Mwilu, judges Mohammed Ibrahim, Smokin Wanjala, Njoki Ndung’u, Isaac Lenaola and William Ouko into focus as their verdict will have an impact on the country’s political processes and landscape.

The questions the judges will determined are the basic structure doctrine, whether it is applicable in Kenya and whether the Constitution can only be changed through following four sequential orders of civic education, public participation, constituent assembly debate and referendum.

The second issue will be whether the president can initiate changes to amend the constitutional, or whether the process should be initiated by Parliament or through a popular initiative by the people.

Proposals in the BBI creating additional 70 constituencies will be the other test for the judges to determine and whether the civil proceedings can be initiated against a sitting president or any person acting in that capacity.

The issue of public participation in constitutional amendment and the role of the electoral commission are another question set for determination.

Since the High Court and the Court of Appeal had found that the Independent Electoral and Boundaries Commission had no quorum to approve the BBI, the apex court will determine the dispute over minimum number of commissioners required for the commission to conduct business. The final issue on the judges’ table will be whether each proposed constitutional amendment provision should be subjected to a distinct referendum question.

As speculation continues to grow on which way the judges will take, there are three possible scenarios on the final outcome that could shape not only the political contest but also the manner in which popular initiatives to amend the Constitution should follow.

“We are likely to have three scenarios in the judgement. The judges can allow the appeals and overturn the Court of Appeal findings or dismiss the appeals and uphold the findings. They can also decide on a Solomonic judgement with fifty-fifty win situation,” said Lawyer Henry Kurauka.

Should the judges dismiss the appeals and uphold the High Court and the Court of Appeal findings that the BBI was unconstitutional, it will be the end of the road for the pet project fronted by President Uhuru Kenyatta and ODM chief Raila Odinga.

This, according to Kurauka, could, however, not spell the end of constitutional amendment process as the parties can use the formula and steps provided by the Court of Appeal on the four sequential steps to commence a new process.

However, if the Judges agree with the appeals as filed by the Attorney General and IEBC and overturn the Court of Appeal decision, it will be big win for BBI-proponents since they will be at liberty to push forward the constitutional amendment process.

The legal experts, however, warned that it might not be possible for the BBI team to proceed to referendum before the election should the Supreme Court agree with their appeals given the time constraints and resources required to conduct a referendum.

Constitutional lawyer Sam Muga said the third option for the judges is to present a win-win situation for all the pro-BBI and anti-BBI teams where they will allow some issues they set for determination and dismiss others.

“They might decide to uphold some of the Court of Appeal findings and dismiss some but either way, it will depend largely on how the Supreme Court judges are going to look at each of the grounds of appeal and the arguments in support,” said Muga. The lawyers argued that should the apex court decide to uphold some and dismiss other issues, it will be back to the BBI drafters to note where they went wrong and correct them. Lawyer Adrian Kamotho added that although the judges singled out the seven issues for determination, “we are not likely to have a unanimous decision since each of the judges have a different judicial philosophy”.

“It is more likely to be a majority and minority decision. We are also likely to see the judges disagreeing on many aspects and the approach they each have to the issues they set for determination,” said Kamotho.

With the three options available to the Supreme Court, lawyer Angela Mwadumbo said it is not possible to tell which way the judges will go given the unpredictable nature of the court.

“The Supreme Court is very unpredictable and is not possible to tell which way they will go. You always find that they say one thing in a case and rule differently in another similar case. We wait and see what they will decide on the BBI,” said Mwadumbo.

Lawyers agree that whatever direction the Supreme Court judges will take, it will have a bearing on the political battles and will be a subject of campaigns ahead of the August 9 elections. They added that it will also be tough call for the judges especially with the strong arguments by the two sides. 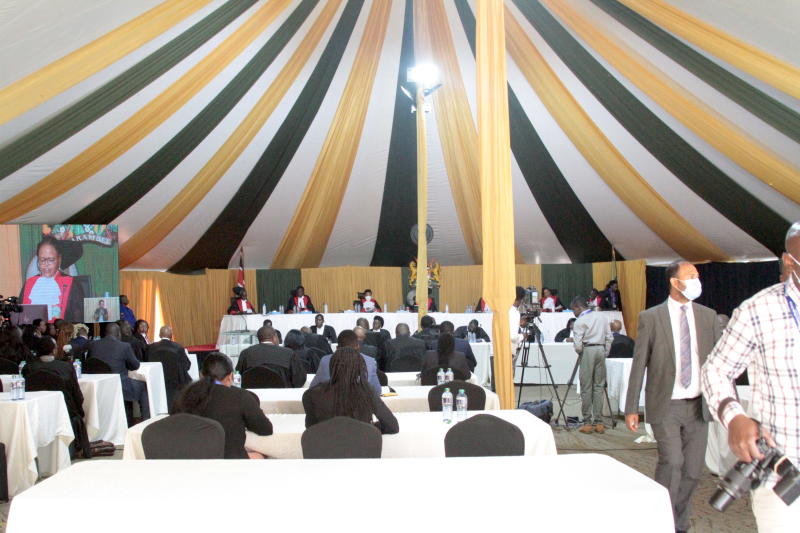 Premium Do not sanitise illegal BBI Bill process, parties plead with court
Opponents of the Building Bridges Initiative have asked the Supreme Court not to sanitise an illegal process to amend the Constitution.
National
By Paul Ogemba By Paul Ogemba
8 months ago
.

By Betty Njeru 3 hrs ago
No cause for alarm after suspected Ebola case turns negative, Ministry says