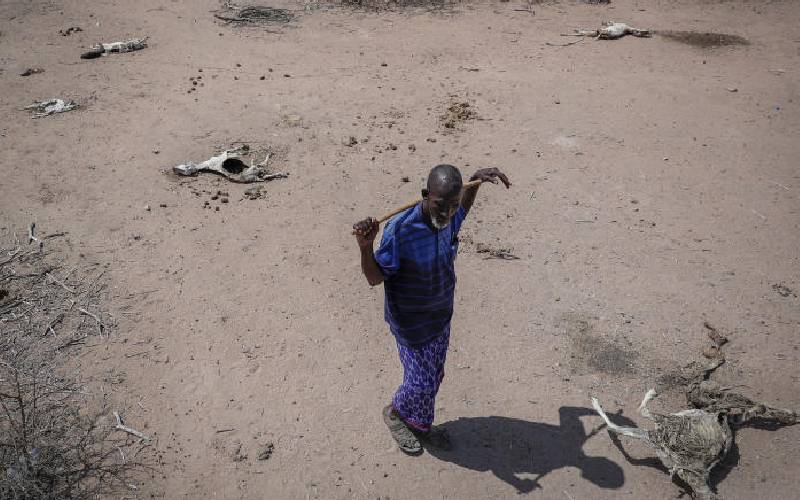 About four million people in northern and eastern parts of Kenya are at risk of hunger and starvation in the next three to five months.

“Rainfall in October and November was less than 60 per cent of the 40-year average across much of northern and eastern Kenya, with some areas registering a significant delay to the start of season or no onset of rainfall at all,” says the report.

With the likelihood of a fourth consecutive below-average season during the March to May 2022 long rains, the agency says there is concern that food insecurity will increase in severity and scale in 2022.

It says three to four million people will be in need of humanitarian food assistance in Kenya, with up to 17 counties cited as hot-spots.

“Given the extremely poor performance of the season, many households did not plant, and among those who did, most crops have wilted or failed to germinate. Late November and early December rainfall is likely occurring too late to adequately support late-season planting as the rains are forecast to cease before effective crop establishment,” says the report.

FEWS NET warns production in these areas is expected to be significantly below average, marking the third consecutive poor season of production in marginal agricultural areas.

The report comes amid revelations that during the month of October, the United Nations Office for the Coordination of Humanitarian Affairs reported some 28,000 people in the worst affected areas had received food and livelihood assistance running into millions of shillings.

In the same month, FEWS NET found the government reported distributing around 12.46  metric tonnes of food and purchasing over 8,000 heads of cattle from farmers as part of an offtake programme.

According to FEWS NET, plans are underway by the Kenyan government for more significant assistance in the coming months, including an emergency relief cash transfer programme, through which 360,696 households will receive Sh3,000 monthly, equivalent to 10 to 16 days of minimum kilocalorie needs for a family of six at current prices.

“The government also signed an agreement with the Kenya Red Cross Society to purchase and slaughter more than 75,000 weak livestock and to distribute the meat as relief food to over 766,000 households,” says the report.

Yet despite ongoing assistance, the report warns people’s needs in the worst affected areas continue to far outpace ongoing and planned distributions.

“Large-scale humanitarian assistance and livelihoods support are urgently required to cover current needs in northern and eastern Kenya, and assistance should be sustained throughout 2022,” it says.

By Brian Okoth | 10 minutes ago