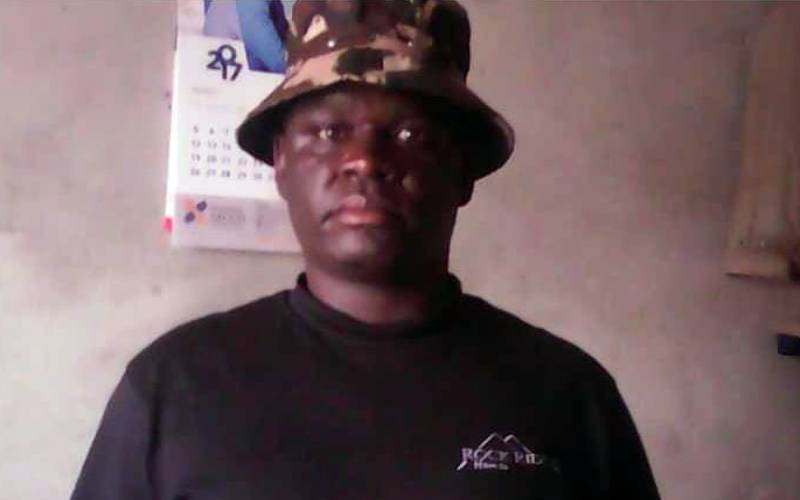 When Benson Imbatu’s mother picked up her phone at 1.03am on Tuesday, she was not expecting to hear good news given the hour. But nothing prepared her for the chilling words she heard from her son.

“Nimeua Carol, sijui nifanye aje...” (I have killed Carol and I don’t know what to do).

Efforts to get more details on what he was talking about ended abruptly when Imbatu hang up and immediately switched off his phone.

Carol Amakove was his girlfriend.

A few minutes later, at 1.05am, he switched on his phone and called a cousin. Again, he said he had killed Carol and was in trouble. He was breathing heavily.

When his cousin tried to ask for details, Imbatu hang up and switched off his phone. This call lasted 67 seconds.

A few hours later, reports began trickling in, and Imbatu’s mother and cousin began to piece together what had happened.

By 3am, Imbatu had killed six civilians before turning the gun on himself.

Imbatu’s mother and cousin, who were identified from the Kabete Police Station officer’s call records, have been asked to get to the area Directorate of Criminal Investigations (DCI) offices to record statements.

At the Dagoretti headquarters, DCI boss Patrick Gikunda and his team yesterday revisited the scene where Imbatu shot dead five people after he killed his girlfriend.

Separately, a team of officers was at the City Mortuary where postmortem examinations on two of the victims of the shooting had been scheduled.

The investigators further recorded a statement from a worker at a bar where Imbatu and his girlfriend were last spotted on Monday night before the bloodbath began.

The investigators were informed that Imbatu and Carol were not on talking terms after an incident the previous Sunday that led to chaos at the bar.

A furious Imbatu is reported to have shot at a TV set when he visited and found Carol talking to another man.

The police officer was furious and kicked and punched Carol, the bar attendant said. The man she was speaking to ran away.

This incident was, however, not reported at the Kabete Police Station where Imbatu worked.

Police investigations found that on Monday night, Imbatu excused himself from a team of officers deployed to patrol the Dagoretti area. At around 11pm, in the company of a police driver, Imbatu went to a bar he operated with Carol and walked her to their rented house.

He was then dropped back at the police station where he stayed until midnight when his commander allowed the team to retire and resume work the following morning.

Investigators say Imbatu did not immediately leave the station when the rest of the team left for home. He later went home, shot and killed Carol, and set the house ablaze.

Imbatu then walked back to the police station and went on a shooting spree before turning his AK47 on himself.

For seven days, a group of youth worked tirelessly, braving the cold at night and the scorching sun during the daytime to rescue eight miners.

Evelyn and Scarlet deny receiving kickback from companies said to have dealt with the county government as Obado refuses to join suit.

By Christopher Kipsang and Faith Kutere | 37 minutes ago

By Jacqueline Mahugu | 6 hours ago

By Nderitu Gichure | 6 hours ago